PRAYING IN UNITY FOR OUR TOWN

Could God send revival to our town? Around 120 Christians from at least six Worthing churches believe that he can and met on a Thursday evening to pray. These meetings have taken place quarterly over the last couple of years at the Assembly Hall in the town but will now be every six weeks at a local church. END_OF_DOCUMENT_TOKEN_TO_BE_REPLACED

After incurable cancer is defeated, now hepatitis has disappeared 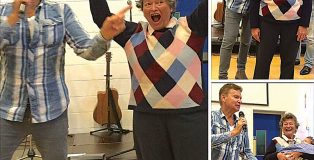 This lady tore four tendons off her right shoulder blade and 4cm of muscle under her arm 16 months earlier when picking up her grandchild. Keyhole surgery to reattach the tendons had been unsuccessful and she was 200th on a waiting list for further surgery although doctors had told her it was one of the hardest operations and success could not be guaranteed.

After John Mellor prayed for her in Jesus’s name, she was able to raise her arm and lift someone else’s baby.

Our photos show her before and after prayer: before she had been unable to lift her arm and could not even shake John’s hand because of the pain. After prayer she could raise her arms and her overjoyed face shows she had experienced a miracle

A young man has been told that hepatitis C can no longer be found in his body.

The hospital staff were amazed that their tests showed that this very dangerous disease had mysteriously disappeared from his system.

More amazing is that while this type of hepatitis can appear to diminish through drugs, the young man had not been taking anything to treat it. END_OF_DOCUMENT_TOKEN_TO_BE_REPLACED

CHOIR DIRECTOR HAS A NEW FIGHT

Former director of Worthing Philharmonic Choir for 40 years and a church organist for over 55 years, Donovan Brown is not taking it easy in his retirement, nor letting his musical abilities go to waste. END_OF_DOCUMENT_TOKEN_TO_BE_REPLACED 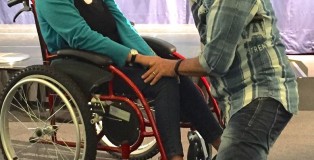 WONDERFUL HEALING TESTIMONIES have been told following visits to churches across Britain by an international healing evangelist with a powerful ministry received from the Lord. END_OF_DOCUMENT_TOKEN_TO_BE_REPLACED

Dancing from darkness to dignity

Saturday 28 February saw a full house at Coastlands Church as ladies from Sussex gathered to eat a delicious meal, watch an interpretive dance by Louise Jones and listen to Tina Johnson relate her journey of transformation. END_OF_DOCUMENT_TOKEN_TO_BE_REPLACED

Veteran minister Rodney Kingstone used to be a household name in Sussex evangelical circles after he started a local church during the heady charismatic renewal in 1981. He’s still going strong and CHRIS EYTE caught up with him

AT 74, RODNEY KINGSTONE PUTS HIS LONGEVITY AND ENERGY down to knowing Jesus as a reality. That ‘intimate’ relationship has seen him through four decades of ministering to others as well as a miraculous healing of his own heart just before surgery. END_OF_DOCUMENT_TOKEN_TO_BE_REPLACED
If you weren't there

This was a superbly organised event which saw the huge venue almost filled, although it was pointed out that the whole town of 100,000 should be praying! END_OF_DOCUMENT_TOKEN_TO_BE_REPLACED 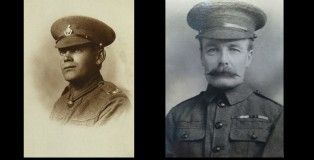 There are some incredible testimonies of the heroic deeds of men and women of Christian faith during the First World War. Chris and Linda McCanna of Worthing were so inspired by these tales that they organised a ‘Greater Love’ exhibition which drew 100 visitors at the town’s St Paul’s Centre

LINDA MCCANNA told HEART the story behind their event END_OF_DOCUMENT_TOKEN_TO_BE_REPLACED

What a pain that was! Healings in church

Fresh from two dates at Bath City Church and en route to Europe, John Mellor arrived in Coastlands Church, Worthing reporting of God’s latest healing miracles.  Bath had seen a vicar’s wife brought to the meeting who was so severely ill with ME that she had to be held up in her chair.  After prayer she had started running around the church. END_OF_DOCUMENT_TOKEN_TO_BE_REPLACED