After incurable cancer is defeated, now hepatitis has disappeared 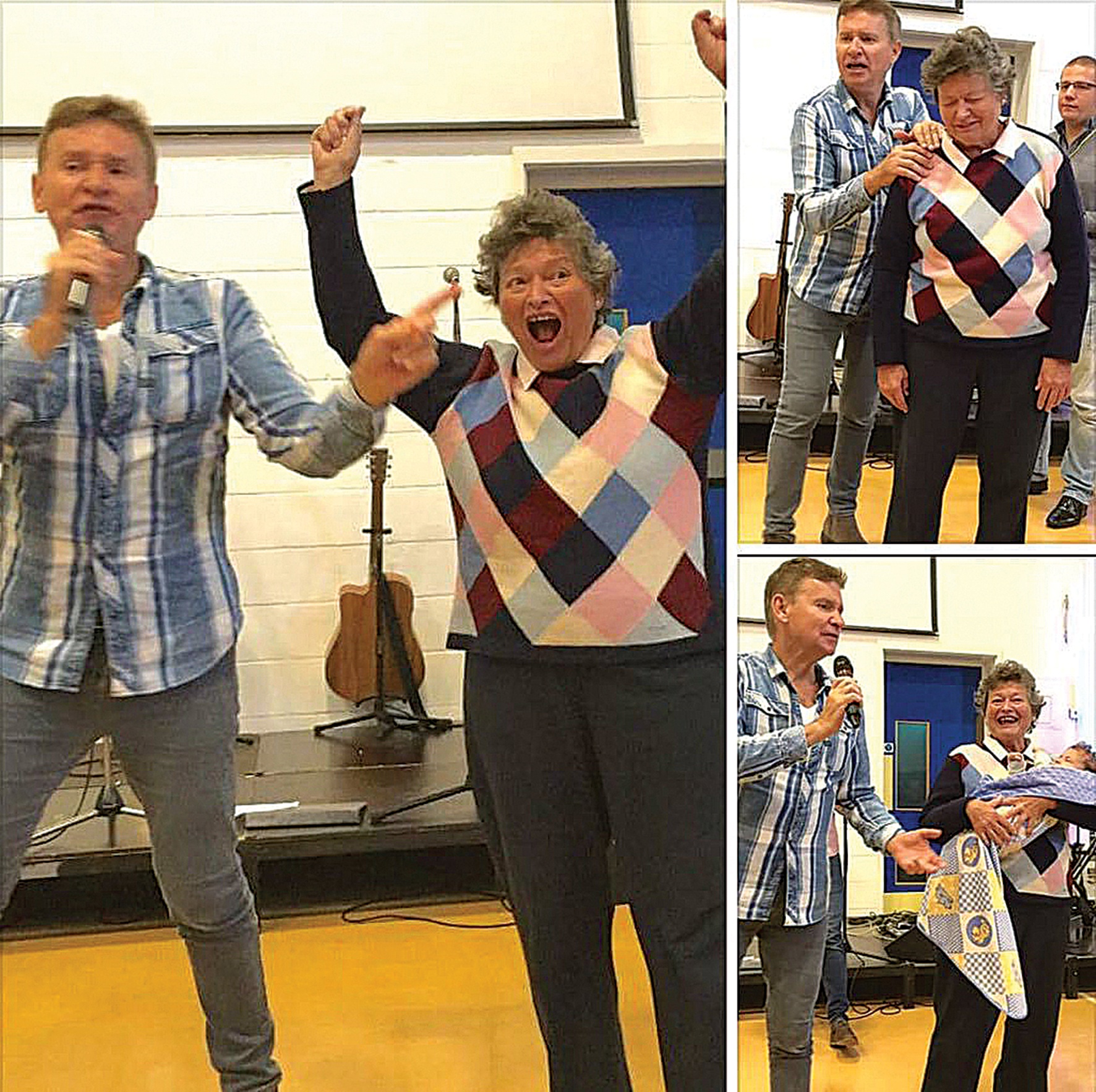 This lady tore four tendons off her right shoulder blade and 4cm of muscle under her arm 16 months earlier when picking up her grandchild. Keyhole surgery to reattach the tendons had been unsuccessful and she was 200th on a waiting list for further surgery although doctors had told her it was one of the hardest operations and success could not be guaranteed.

After John Mellor prayed for her in Jesus’s name, she was able to raise her arm and lift someone else’s baby.

Our photos show her before and after prayer: before she had been unable to lift her arm and could not even shake John’s hand because of the pain. After prayer she could raise her arms and her overjoyed face shows she had experienced a miracle

A young man has been told that hepatitis C can no longer be found in his body.

The hospital staff were amazed that their tests showed that this very dangerous disease had mysteriously disappeared from his system.

More amazing is that while this type of hepatitis can appear to diminish through drugs, the young man had not been taking anything to treat it.

This particular young man, who is a new Christian and intends to be baptised by full immersion as we go to press, had come into a Christian family after living rough on the streets and using drugs, which had left a range of health problems. He had received prayer for other problems, but not for the hepatitis!

The family attend Coastlands Church, Worthing, which hosted the Australian evangelist John Mellor in October. The church’s pastor, Drew Kear, had worked in partnership with Kingdom Faith Church, Horsham and Worthing, to ensure that as many people as possible had access to healing.

Healing is close to Pastor Drew’s heart, as it is to Pastor Colin Urquhart, the veteran Bible teacher who saw an an 18 month period when all were healed in Luton in the 1970s and has continued his healing ministry ever since. The healing ministry is being seen both in his son Clive’s ministry (Clive now leads Kingdom Faith Horsham) and in that of Pastor Jonathan Dyke, who leads Kingdom Faith’s Worthing congregation.

Pastor Drew Kear of Coastlands believes that a healing revival has begun, so every Sunday evening service at Coastlands Church is now dedicated to healing because the healings which began so spectacularly at the meetings with John Mellor in October have been continuing. Recent weeks saw remarkable healings in the services; a lady who lived in a wheelchair at home due to leg surgery resulting from diabetes (she said that her leg was ‘held together with pins’) found she could walk without pain and unaided. Then her husband, who had bad arthritis in his knee, experienced pain disappear after he was prayed for.

“For us, Sunday evening is set apart for the healing of bodies, minds and emotions,” said Pastor Drew Kear. “Jesus told us in the Bible that his disciples would lay hands on the sick and they’d recover. We’re encouraging everyone in the church to have this same faith so we can affect the whole community and bring the love of Jesus to all.”

We know from anecdotal evidence that cancer is being healed in Sussex and elsewhere, so do let us know so that many readers can be encouraged to have faith for healing

If you have experienced healing and have medical evidence, please contact editorial@heartpublications.co.uk