The Grenfell Tower inferno – WHY DID GOD ALLOW IT? 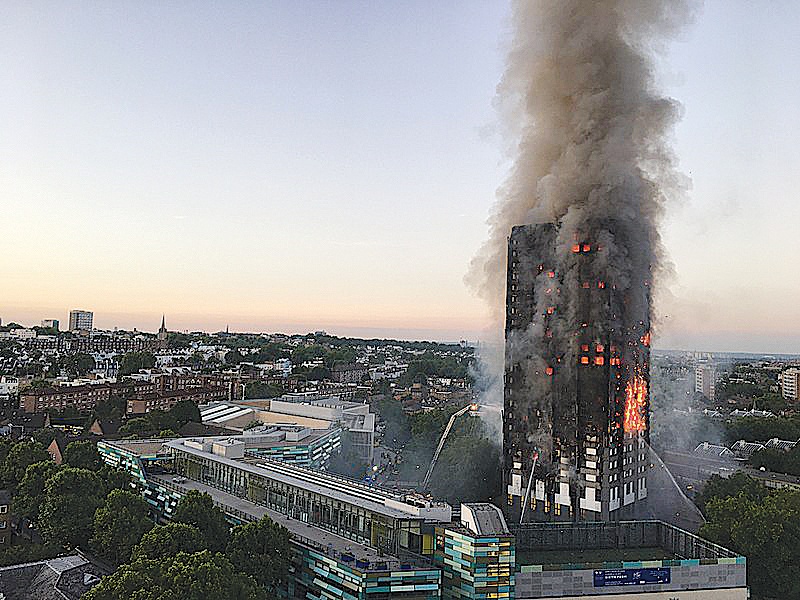 One church at least has seen good come out of horror

The horror of the Grenfell Tower fire has left a lasting memory in the minds of all those who saw the burning building on television, but for the survivors their lives are scarred for life.

It is not only memories of the fire and the smell of smoke that will stay with them for ever. Many of them have lost all their possessions – their homes, clothes, passports, family photos and irreplaceable mementos. In addition, many also lost loved-ones, friends and neighbours; the trauma of that night will remain with them

I have spoken to Pastor Derrick Wilson of the Tabernacle Christian Centre whose church has been at the heart of the refuge and counselling for the survivors. He is a man with a strong sense of prophetic mission and for some time he had been hearing from the Lord that he should be prepared for a great influx of people.

On Tuesday evening, just hours before the fire broke out in the early hours of Wednesday 14 June, Derrick was in his church leading its Bible study and prayer meeting. During the meeting, he once again heard the Lord telling him to be prepared, but this time there was a specific word. It was “As from tonight there will be a spiritual shift over this church. You will see people come here from north, east, south and west.”

Within hours the phones started ringing. Messages flooded in from friends and relatives – a major incident had occurred on their doorstep. The doors of the Tabernacle were immediately opened and from nowhere people started arriving. The church suddenly found itself at the heart of a mission of mercy, taking in survivors for shelter and surrounding them with love and practical help.

Over the next few days the church became one of the centres for clothing distribution as well as for counselling and comfort. So much arrived that the whole building was stacked with gifts of all kinds. But volunteers also came from everywhere – one even came from Bristol! Many of the volunteers were not Christians, but they seemed to know where to come. They simply arrived; God had guided them there.

Once there, the volunteers found a peace and joy in what they were doing. They worked together with a sense of purpose and the presence and blessing of God was so real that it was almost visible. A number of the volunteers gave their lives to the Lord in those first few days as they talked with the pastor and church members and experienced the love in the little community.

But it was the Muslim community who were most impacted. Men, women and children came into the Tabernacle. Many simply came looking for practical help and clothing, but the love that surrounded them reduced many to tears. All who came into the church were offered comfort and prayer; many gladly accepted prayer, hearing about the love of Jesus, probably for the first time.

Pastor Derrick sees this as just the beginning of a harvest of souls for which the Lord had been giving him forewarning and his little community of believers had been preparing. The BBC filmed the Tabernacle for ‘Songs of Praise’ so they are hoping that some of the testimonies of changed lives will be broadcast to the world.

It is amazing how God brings good out of evil and blessing out of disaster. In the Bible the earliest account of this kind of transformation is in the story of Joseph who was sold into slavery by his brothers. But he became mighty in Egypt in a time of widespread famine and when his brothers came to buy corn he revealed himself to them saying that what they had meant for evil, God had used for good.

Essentially this is the message of the Cross that Pastor Derrick and his helpers have been giving to all those who have come to the Tabernacle. Of course, this is not why God allowed the Tower inferno to occur, but God is never taken by surprise and he knew what would happen.

The public enquiry will show the human reasons why this happened, but in spiritual terms we know that God has been warning us for many years that as a nation we have turned away from biblical truth, rejecting God and putting the nation outside of God’s protection. Disasters like this are the inevitable result. But the amazing thing is that out of the tragedy good can come.

Sometimes it is only when things go disastrously wrong in our lives that we are open to the truth. This was demonstrated many times in the history of Israel. In the 40 years before the destruction of Jerusalem in 586 BC, God raised up three prophets – Zephaniah, Jeremiah and Habakkuk – who all brought similar strong warnings of the consequences of idolatry, immorality and injustice in the nation that had turned away from God.

These three pre-exilic prophetcs said that disaster was inevitable unless there was repentance. But they also prophesied restoration and prosperity as an outcome of disaster. Their warnings were ignored. Jeremiah was still calling for repentance when the Babylonian army was outside the gates of Jerusalem, because he knew that God could strike them down even at the last minute. But there was no repentance; the city was destroyed and the people were taken into slavery in Babylon.

It was in Babylon, however, that God prepared the way for Messiah, telling the exiles that they would be a ‘light for the Gentiles’ and that through them God would bring his salvation to all nations.

The disaster of Grenfell Tower should be conveying a strong warning to the nation of the consequences of turning away from God. If the warnings are not heeded this will not be the last disaster!  But God also promises that a time of restoration and blessing will undoubtedly come, even if it has to come out of the flames of misfortune.

“Derrick has been a pastor for 24 years, and his wife Paulette is Principal of the nearby Christian school. He admitted that at times it has been a difficult role to sustain, with many challenges and hardships, both financially and in terms of opposition, but God had his man prepared.” Read more about Pastor Derrick and other articles by Clifford Hill in Prophecy Today’s weekly online magazine: www.prophecytoday.uk