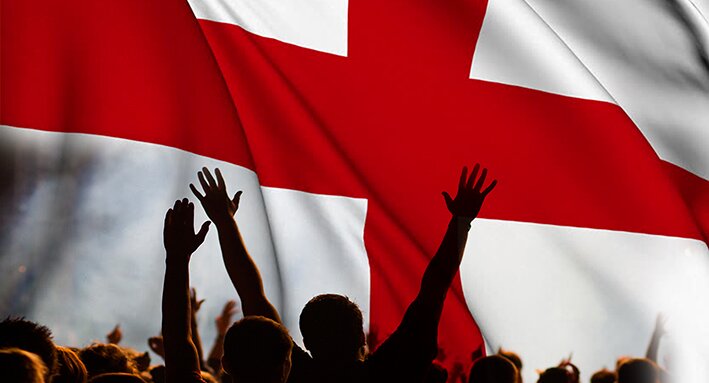 After millions tuned in to worship their heroes, led by the bearded ‘prophet’ Southgate whose words of wisdom had successfully guided his followers through the rigours of contest with foreign invaders, is our nation’s football passion really only harmless fun – or bordering on blasphemous?

WE CANNOT ALLOW July’s Euro football final to pass into history without a biblical comment.

Even if you are sick of football, and all sport – there’s a lot we can learn about ourselves as a nation, especially about how we face failure in a time of stress.

It was certainly not easy for the nation to accept defeat at the end of a match that began so encouragingly with a goal inside the first two minutes.

The chance to let off steam and forget the days of lockdown loneliness was here at last!

I have no doubt that the intensity of the football passion that had gripped the nation for so many weeks was, at least in part, a reaction to the pandemic lockdown that had kept people isolated and depressed for so many months. Here now was some good news – England was winning something – there was something to shout about. The chance to let off steam and forget the days of lockdown loneliness was here at last!

Sixty thousand people gathered in the ‘people’s temple’ at Wembley, and 30 million turned on their TVs, to worship their heroes led by the bearded ‘prophet’ Southgate whose words of wisdom had successfully guided his followers through the rigours of contest with foreign invaders.

Their open top bus was led by a bunch of young men dressed as angels complete with wings, who were led by a bearded man in a long white robe

My mind flew back to the period in the early 1960s known as ‘The Glory Days’ in Tottenham. I was the minister of a church opposite the old town hall and the victorious Spurs team used to ride down the High Street in an open top bus, to be greeted by the Mayor, whom I then served as chaplain. This became almost an annual event as the Spurs team won a succession of trophies.

In 1963 Spurs was the first team to win a European championship and the worship of the team broke all bounds. Their open top bus this time was led by a bunch of young men dressed as angels complete with wings, who were led by a bearded man in a long white robe. Together they carried placards such as:
“HALLOWED BE THEIR NAMES” and “THEY SHALL REIGN FOR EVER”.

I’m sure Jeremiah would not have accepted it as harmless fun!

I sent a telegram to the Home Secretary asking for them to be charged with blasphemy which caused the matter to be raised in Parliament, but it was dismissed as a piece of harmless fun by our politicians.

I’m sure Jeremiah would not have accepted it as harmless fun!

“Has any nation changed its gods?” he thundered from the steps of the Temple in Jerusalem. Even pagan nations are faithful to their gods, he said: “Even though they are not gods at all, but just bits of wood and stone”.

The people of Jerusalem had deserted the God of Israel who was the only true God, the Creator of the universe and turned away to worship worthless idols.

But this is just what Britain has done! It was G K Chesterton’s biographer, Émile Cammaerts, who, paraphrasing Chesterton’s fictional hero, Father Brown, said: “When a nation ceases to believe in God, they do not believe nothing – they believe ANYTHING!”

This is surely true of Britain. We have had the truth and we have even seen the power of God demonstrated in such miracles of national salvation as Dunkirk and the Battle of Britain – yet in a single lifetime we have rejected truth and embraced the gods of sport, entertainment, and profligacy.

I am old enough to remember the day when the whole nation turned to God in prayer, but today only a faithful remnant even believe in the God of the Bible. How could this happen in a single lifetime? It surely has to be because Bible believing Christians did not teach their faith to their children – they left it to the Sunday School, or the Church, or the day school, to do what they themselves should have done.

We have even seen the power of God demonstrated in such miracles of national salvation as Dunkirk and the Battle of Britain – yet in a single lifetime we have rejected truth and embraced the gods of sport, entertainment, and profligacy

We are now paying the price of formalising Christianity into institutionalised organisations run by professional clergy that bear little or no resemblance to the New Testament ‘ecclesia’ that were communities of believers radiating the presence of the living Christ in the lives of every member. In my book, ‘The Post-Pandemic Church’, published last month, I point the way forward to the recovery of early Christianity as offering the only hope for the nation in these days when all the pillars of society are being shaken by a plague that has clearly been allowed by God for a purpose.

The football mania that has gripped the nation reveals the godless state of the population that is hungry for good news. But we have a silent Church whose leaders have no message for the nation!  Will the people of the remnant, the true ecclesia, also keep quiet and not share their faith with others?

Older Christians may not have done a good job with their children, but they have a wonderful opportunity with their grandchildren who love to hear stories from their grandparents. We all have a story to tell about faith in God and what he has done for each of us.

These are the good news stories that can transform the nation! Bible believing Christians may be only a remnant – but God loves to use small numbers like Gideon’s 300 to save a people.

This is another day in the life of the nation when ‘The Few’ can be used by God to save the nation from disaster. Telling our story is something that we can all do – even as armchair evangelists.

Come on believers! Let’s fly the flag for the Gospel in whatever time we have left!

Issachar Ministries is currently seeking to link up like-minded believers in small groups around the country. See the ‘Prophecy Today’ section in the centre of this newspaper

Due to Clifford Hill’s writing commitments and the call to focus on curating his decades-long ministry’s heritage, this will probably be one of his last contributions to HEART. I am so very grateful for his faith in coming on board in the early days (2011) and taking on another commitment at an age when others may have considered retirement. His insights and status as a nationally known prophetic voice have enhanced the paper immeasurably. If you’d like to show your appreciation personally, or wish to share memories of how his ministry benefited you, please contact heritage@candmministries.org.uk or if you are not on e-mail ring the office mobile 07759 042 315 where you will be redirected.