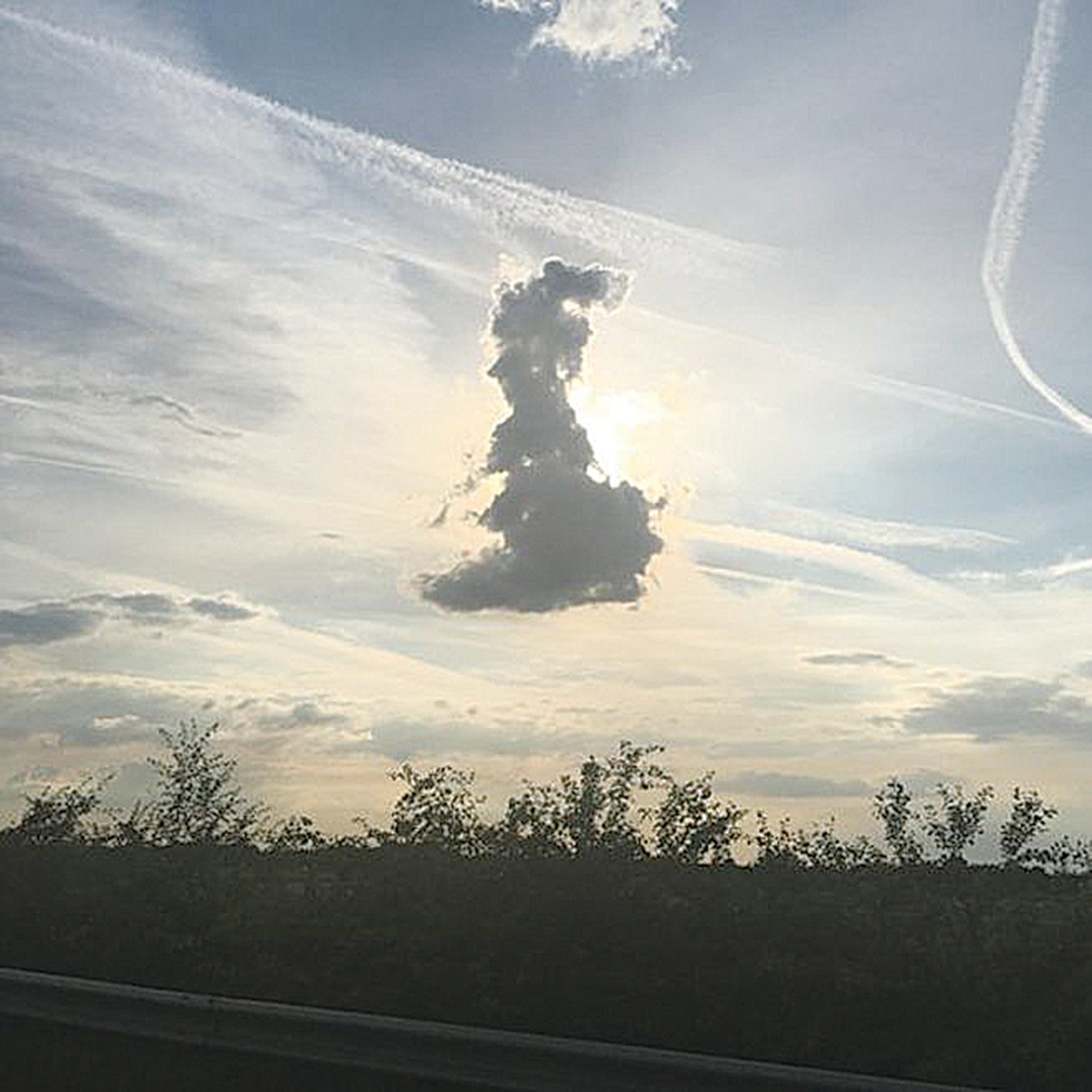 Is this picture an encouragement to pray?
Cloud formations appearing to be in the shape of Great Britain have been snapped three times since 2009. This latest one was taken in Huddersfield and sent to the BBC on 15 June (Credit: Golcar Matt/WeatherWatchers)

The Day of Prayer announced for 8 September is not really a National Day of Prayer for the simple reason that the government and monarch have not endorsed it.

Both Buckingham Palace and Lambeth Palace have turned down requests for a national day of prayer for several decades.

The Queen has been repeatedly asked to call for a national day of prayer like her father, King George VI did in the dark days of World War II.

One of the founders of the 1960s Festival of Light (which culminated in two large rallies in September 1971), the late Steve Stevens DFC, wrote regularly to the Queen to request that Her Majesty would call such a day as Head of the Church of England and Defender of the Faith.

Perhaps mindful that Her Majesty has had to sign into law her governments’ increasingly anti-biblical laws over the past decades of her reign, such as the repeal of blasphemy and witchcraft acts, her officials always replied that it was down to the government to take this step.

The Church of England has had its own periods of prayer for renewal, in the last two years, which is commendable, but wrangling over a scriptural approach to homosexual practice appears to have taken up much of its time.

Meanwhile national leadership has arisen from a different, less compromised, quarter. Clear calls for Christians to come before God in repentance for their nation’s departure from biblical standards have come most clearly from the non-denominational section of the Church. (NB in this paper the Church is used to refer to Christians in general, interchangeably known as the ‘Body’ of Christ which is a New Testament term.)

Undistracted by the politics of a bureaucratic structure, these ministers of the Gospel have been able to focus on prayer and evangelism and can now call on support from across the nation. Socially and spiritually they mix with like-minded Christians so are not swayed by the pressures of the elite. As at the time of Dunkirk, they can summon support from small groups who will ‘put to sea’ in prayer. All the small groups needed was leadership to focus their efforts.

In addition to David Hathaway, Brenda Taylor and Dennis Greenidge, there is Johnson Akinfenwa, Director of Voice Of Prophecy International Outreach, who told HEART that he acted on a divine command in 2009 to write to the Queen, to Archbishop Rowan William and all the leaders of interdenominational churches in the UK asking them to set apart a day of national repentance for the nation. He said, “In the prophecy the Lord said, ‘If we (the nation) refused to carry out the national prayer mandate the land will remain under the curse of barrenness and desolation (because of the sin of apostasy) in which investments will no more thrive in the land and there will be a prolonged recession.”

He received replies, but none were positive. So backed by Dr Hugh Osgood, the current President of Churches Together in England and Moderator of Free Churches in England, he established an Annual National Day of Prayer for Repentance, Revival and Healing for the UK. It held its eighth consecutive day in June with several hundred fervent praying people in London’s Emmanuel Centre, where the 8 September meeting will be held.

This paper does not condemn the Queen or the Church of England, however. A devout churchgoer, Her Majesty has been in an impossible position; she can advise and warn but to refuse to sign into law the ‘freedoms’ voted for by her government would have brought a constitutional crisis. Personally also, she could have been accused of hypocrisy for condoning repentance for the laws she has had to pass and for going against the democratic will of her people.

As for the Church of England, it is indeed a broad church and any Archbishop who imitated Elijah by standing up to those ‘modernisers’ who want the Bible to move with the permissive times could find himself alone or presiding over a split.

He could, however, find himself pleasantly surprised by the warmth of support from the Commonwealth and certain Anglican churches. Already this year one vicar has printed and sent thousands of copies of an article urging war-time style prayer to every PCC in Britain, but he has felt more or less alone, knowing from his diocesan meetings that firm adherence to biblical morals has waned dramatically.