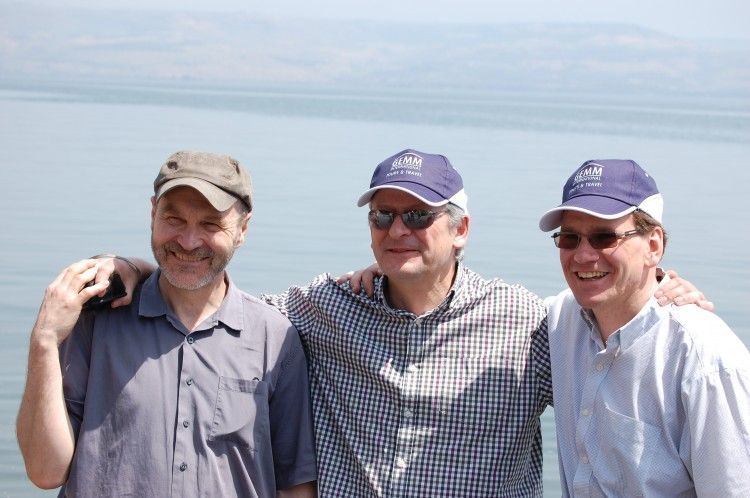 Last summer Roger Greene told the story of how God “filled his company’s nets” with new business when they believed that a Bible verse from John 21 to “throw their nets on the right side of the boat” applied to their situation at that time.  Now Roger tells us how that verse has proved to be a divine prophecy for their businessFIRSTLY, I AM NOT A FISHERMAN.  But business is business, whatever the sphere, and we have learned that God uses 2,000 year old Bible history to lead us to greater profit – IF we obey his leading!

I am one of three Christians who own and run Tricordant, a commercial consultancy specialising in solving sticky organisational and business problems.

As a company, we pray together and believe that God will supply the clients.  Our obedience was tested when, two years ago in June 2011, when turnover and profits had been at a concerning low, the Lord did something that for us was quite extraordinary. He gave us a prophetic word from John 21– remember how the resurrected Jesus appeared to the disciples and instructed them, at the end of a long and fruitless night shift fishing on Galilee, to throw their nets on the right side of the boat?

So we’d prayed about this. We didn’t understand exactly what it meant but told God we believed that he was going to “fill our nets” anyway!  Suddenly invitations began to flow in from unexpected sources without doing any marketing. The second six months were so extraordinary that turnover and profits ran at an all-time high! The way we look at our pipeline of future business and our approach to marketing totally changed as a result.

Part 2 of the story begins in autumn 2011, when, in our shared prayer time, we all believed we’d heard an extraordinary call from the Lord: he clearly called us to go to Galilee as a company to meet him there.

It was not to be a commercial or marketing trip: it was simply a call to go and meet him in Galilee. In a profound sense it was a major strategic review, something we hadn’t done since our founding eight years previously.

The Lord confirmed the call to us through an independent voice in a way that completely convinced even the more sceptical in the group that it was a genuine call from God. This was not exactly the type of strategic business investment we were expecting to build into the company budget at our directors’ planning meeting! But we decided to act on the word, be obedient and planned for a party of 14 of us to go to Galilee and Jerusalem shortly after Passover 2013.

Because the Lord had called the whole company to go, it meant we effectively had to plan to close the company down for a week – a whole week with no fee-earning work, no marketing activity, no normal meetings, at a cost to the company of £18,000!

Everyone was given the time to go on the trip-it did not count as annual leave. Probably not the kind of business strategy investment to get Dragon’s Den support!

It is fair to say that, given the security situation in Israel – civil war in neighbouring Syria, regular outbreaks of violence in Gaza and the West Bank etc. – there were some significant moments of anxiety and doubt about pursuing the call over the course of the year of planning. We were set, however, on being obedient to God’s call regardless of how it may have seemed in business terms.

In our business clients normally contract us for a specific assignment over a specific time period. Just a couple of weeks before we were due to fly out, however, a couple of current clients said they would like to contract ahead with us and “pre-buy” our services. This had never happened to us before. One of the clients pre-committed to the second largest contract sum in the history of the company without actually defining all the assignments!  What’s more, they said they wanted to pay us up front! The Lord was clearly blessing us and allowing us to go off on our company pilgrimage in the knowledge that our order books were healthy for when we returned.

We spent a most incredible week in both Galilee and Jerusalem. It was a profound time where the Lord spoke to us both corporately and individually, with a clear mandate for the business. The whole business team were able to reconfirm profoundly our vision and refresh our strategic calling and mission together in fellowship.

The pre-ordered work before we went was enough for us to glorify God and thank him for his provision. But that is not all he did.

Those of you in business know the importance of cash flow and that unpaid invoices can be the bane of your corporate life. Well, the Lord got us to close our business down for a week, which of course meant we couldn’t do the usual stuff like chasing unpaid invoices or checking the cash flow and cash balances. What happened?

In the week we were away we had a flood of paid invoices. We were left with only one unpaid invoice more than a month old. We received £240k in paid advance invoices for work we have yet to do over the coming 4 – 6 months. We ended up with four times our normal level of cash in the bank reserve than usual!

Not only had the Lord filled our order books before we went away, but he filled our bank account while we were away!

The Lord has got us on an incredible business journey. We were obedient to his call, despite the total lack of “business logic”. He has given us a mandate and he is guiding our path. Who knows where this will take us? He knows. And that’s enough. He is God!

Roger Greene and a group of Christians in business and the workplace meet for breakfast every month in Horsham to pray and encourage one another in their everyday work. If you’re interested in joining them, please contact Roger on roger@tricordant.com