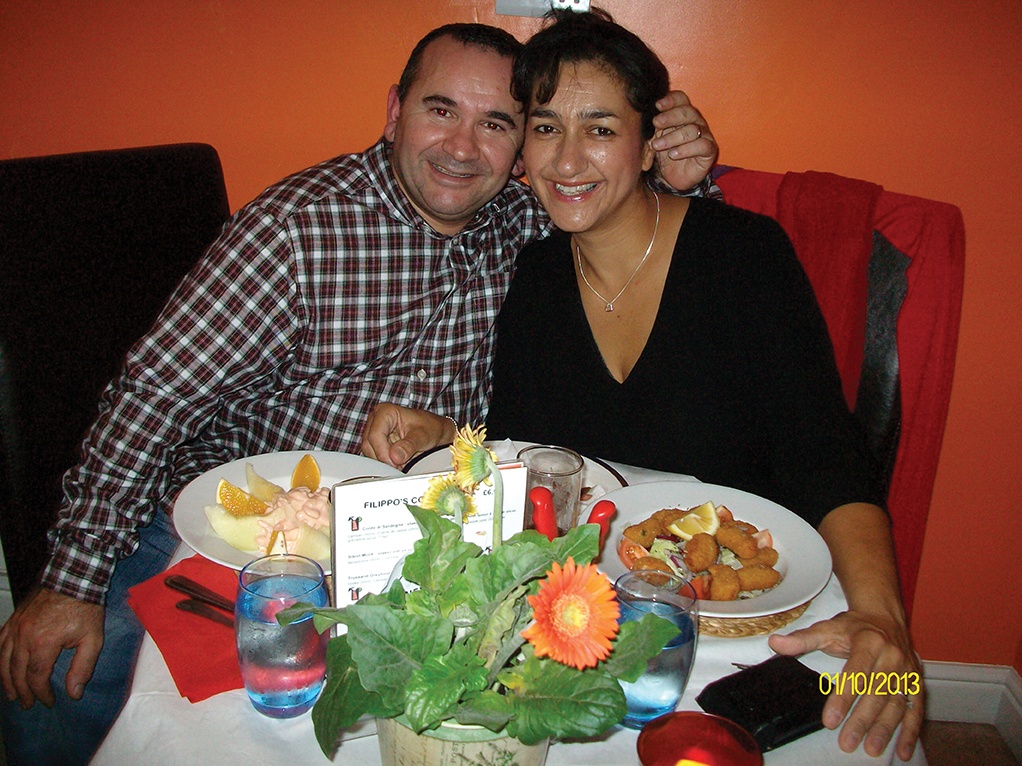 Amazing stories from a couple who combine running a restaurant with praying for their customers to have miracles. Plus how they made MORE profit by keeping Sunday special!

Tina Marziano is a member of the Ignite! fellowship of Christians in business and the workplace who meet every month in Horsham. She and her husband Filippo own and run Filippo’s restaurant in Horsham. In this article Tina tells the story of how, nine years ago, the Lord spoke to them as a couple about “fishing for men” and that their “net” was to be a restaurant.

FOR SEVERAL MONTHS we met with a group of faithful friends early in the morning once a week to pray. This Word about ‘fishing for men’ was confirmed and endorsed by our Church leadership. We finally opened Filippo’s Italian Restaurant Pizzeria in December 2006.

Filippo is the Head Chef, creating home cooked dishes inspired from Sicilian cuisine. I am his wife and business partner helping to run the business, taking care of administration, bookkeeping and front of house duties at busy times. We have worked hard since the beginning. We also have four beautiful, young children.

Over the years, we have seen many people’s lives impacted by the Gospel of Jesus Christ. For example we had two chefs who both used to ask lots of questions, like “How do I get to heaven?” After the answers were given, they both gave their lives to Christ. And several other staff members did likewise!  We often invite staff to come with us to our local church.

One staff member was told by doctors that she could not have children. After Filippo and another Christian friend prayed for her, a miracle happened! Just a couple of weeks later she announced she was pregnant! We were all overjoyed!

A regular customer of ours who was unable to have children, while visiting the restaurant got chatting with us. Again after prayer, specifically I laid hands on her womb (she was happy with this) and prayed simply with faith for a child to come forth! Shortly thereafter, she and her husband were also blessed with a boy who is now seven years old!

We have hosted nine Alpha courses at Filippo’s over three years working with a local church. The Word has been preached and many have received their salvation and been healed. There was always such a wonderful atmosphere on those nights.

We have so many stories about how God has intervened with us and our business. Recently on a Friday afternoon our big industrial dishwasher started leaking all over the floor and we knew on a Friday afternoon it would be difficult to get it fixed before the busy weekend ahead. Filippo phoned to tell me as I was doing the school run. I started praying in the car, something to the effect of: “Father please enable the dishwasher to be fixed this afternoon, let it be a simple thing to fix, let it be cheap and quick.”

In the meantime our repair man was just returning back to Horsham and able to pop in to see us, had the spare part with him and charged us very reasonably! It pays to be specific with your prayers. We were so thankful.

Recently, we had a growing Sunday trade, but it was really limiting our family time. As part of the Ignite Prayer Group, we received a Word about “stewarding our own family first”. Although on a commercial level it seemed best to continue on Sundays, we strongly felt to close and honour God’s Word to us. In terms of takings, the month which followed was the best month this year so far! God’s solutions to our business issues aren’t always what you expect.

Every day we are learning to trust and obey our Lord Jesus more and more, to lean on him and not to rely on ourselves. We give God all the glory!

With thanks to Roger Greene for this report

Roger Greene leads the Ignite! group of Christians in business and the workplace – they hold breakfast and regular prayer meetings every month in Horsham to pray and encourage one another in their everyday work and business. If you’re interested in joining them please contact Roger on roger@tricordant.com