Michael Bushby nearly hanged himself after a devastating prognosis. But God intervened and today he is cancer free

MICHAEL Bushby sat alone in the darkness of his garage, holding a beer in one hand and a skipping rope in the other, ready to use as a noose to hang himself.

Stronger chemotherapy was needed for the incurable stage four cancer in his chest, spleen, neck, bone marrow and stomach

He was already “smashed” on alcohol and the words of the doctor kept spinning in his drunk mind. The treatment hadn’t worked. Stronger chemotherapy was needed for the incurable stage four cancer in his chest, spleen, neck, bone marrow and stomach.

“If you don’t open this door, we’ll call the police” – the panicked voice of his wife Maria shook him. He heard his daughters Helen and Jennifer as well, calling him to open the garage.

“I thought that if I am dying, I might as well end the journey,” recalls train driver Michael. “I was angry with God. But I will never forget hearing the voices of my wife and daughters.

“I came outside the garage and surrendered my life completely to God. I said to him that whatever life I have left, take it and use it for your glory.”

That was in May 2013 and after three strong chemo sessions, and a week in isolation for an infection, Michael was told in the October that his ‘incurable’ cancer was in complete remission. He was discharged by the cancer specialist who later told him, “You are a testimony to cancer patients.”

The specialist told him, “You are a testimony to cancer patients” 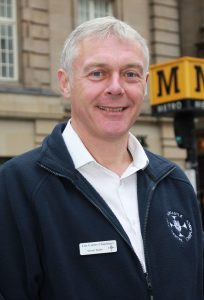 “I believe in a God of miracles,” says train driver and chaplain Michael Bushby

“I’m no longer afraid of cancer or death because I know that Christ is my eternal Saviour,” says Michael, 55. “I don’t ever think of the cancer. It’s made me surrender more to him. God works together for the good of those who love him. I now support others with cancer.”

Jeremiah 29:11-14 was a Bible passage that really helped Michael during his treatment: “‘For I know the plans I have for you,’ declares the Lord, ‘Plans to prosper you and not to harm you, plans to give you hope and a future.’”

Michael, who lives in Gateshead, has since become a regional director of Christian Vision for Men. The role was offered without his even applying, which he believes is “further evidence of how God leads and directs our paths when we fully surrender to his will”. He is also involved in chaplaincy work.

Michael had first become a Christian in October 1993 when a friend invited him to a local church in South Shields.

“This light lit up my whole being”

“During that meeting, I felt such a sense of love from the people there and I accepted Christ that night as my personal Saviour. I came home and lay down in bed and this light lit up my whole being, and with it there was love and peace.”

The cancer diagnosis later on “turned life upside down” and Michael felt “troubled and hopeless”. People prayed for him all over the country and he was told by a friend that he shouldn’t fear, since God would bring him through the cancer.

“Doctors don’t believe in miracles and they would never say I was completely healed,” he says. “But I had stage four and here we are in 2019, and I am still serving the Lord. I would never have imagined that I would be doing the work I am doing now. I feel humbled.”

Every morning, Michael and his wife Maria sit together and thank God for the new day he has given them.

He adds: “Never give up. Trust God. You may not get the answer you expect. I believe in a God of miracles, even if that’s required via doctors and medicines. Fear not, God is a living God and with him all things are possible.”

Michael invites anyone suffering with a serious illness who wants encouragement to get in touch with him at michael.bushby@hotmail.co.uk

This testimony recently featured in the evangelistic newspaper Good News. To get copies for outreach, call 0115 9233424