Bibles, witchcraft and orphans – an organised walk in Uganda 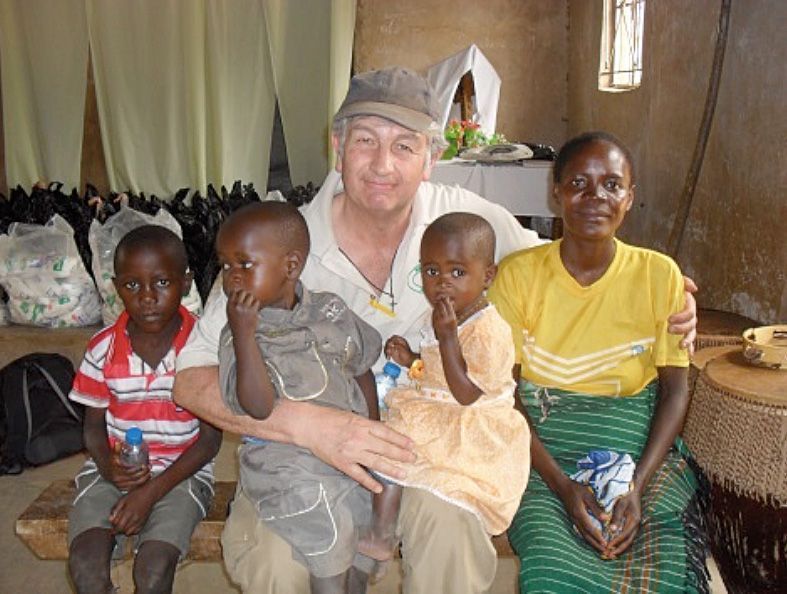 Street Pastor Co-ordinator Martin West describes his three weeks in Uganda. Martin and his wife Sally also distribute HEART OF SUSSEX in Hastings, Battle and Bexhill.  A shorter version of this article is on p16 of HEART OF SUSSEX for April/May 2014

WHAT DOES A STREET PASTOR CO-ORDINATOR DO IN HIS TIME OFF? He takes off for three weeks and some 5000 miles later arrives in Uganda with a team of 12 like-minded Christians to share the Gospel Good News and serve the hungry poor.  That’s what I did this February, representing “Through Faith Missions” (formerly “Walk of a 1000 Men”).  We went at the invitation of the Church of Uganda and Pentecostal churches.

Our hosts had deliberately sent  us to areas of witchcraft and cult activity. t has been an incredible journey, for which I cannot thank the Lord enough.”

Mindful of the last verse of 1 Corinthians 1 (We boast only in the Lord) it was clear that our hosts had prayed incessantly until an “open heaven” welcomed us. Visiting 17 schools we acted out parable skits such as David and Goliath and The House that was built on rock (pic 2), sang worship songs  and shared the Gospel message of salvation.

We evangelised in prisons, hospitals, churches, crusades, on a live Radio Gospel show and door to door. We were humbled as we shared physical and spiritual food to a church full of HIV+ families as in the 3rd and 4th photos.

Overall we witnessed to between 15 and 20,000 excluding the potential radio audience of 750,000. Personal encounters resulted in over 250 decisions for Jesus each one receiving a Bible in native tongue. Translators took note of names so each invited to church and discipled.

What follows is the testimony of a team mate:

“When we went to the crusade tonight, Martin and I got off the mini bus and invited to pray in a home only a few feet away. Harriet, wanted prayer because she is a diabetic. Martin spoke to her about salvation, but she said that she would not give her life to Jesus because she is a Catholic. I explained that she could remain a Catholic and still be born again quoting John Ch 3 vs 3 and 7.  As I was doing so, a young girl of about 14 came in. Her name was Fiona. She and her sister, Juliette, were orphans. They had been taken in by their Aunt Harriet. Martin expounded on what had been said, and Harriet was now happy to repeat the sinner’s prayer. Fiona did so too, but because it was so dark inside the house, Martin didn’t realise she had done so. When Harriet finished the prayer, there was such a release it was tangible. Harriet looked as if a ton weight had been lifted off her shoulders. I told Martin that Fiona had also prayed the prayer that Martin had recited. The Holy Spirit was there in an incredible way. I gave Fiona a Gideon’s New Testament Psalms and Proverbs version. The Lord had me speak to her about the gifts of the Spirit in 1 Corinthians 12. The Lord had me tell her of the ways in which the Lord would speak to her. I explained about the still quiet voice within, and she had already experienced him doing so. I then went around their home anointing every wall, door lintel, jamb and threshold with the blood of Jesus. Shortly afterwards, Fiona went to Martin with two young girls, slightly older than herself. She told him that they wanted to become Christians. Martin explained that they needed to confess and receive forgiveness of their sin and say the sinner’s prayer from their heart and suggested Fiona lead them. As Martin was preparing to show her a prayer on a leaflet, she recited the prayer verbatim and brought the two girls into salvation. An amazing young lady, an even more amazing Father God. We found out that Fiona’s sister had gone to a witch doctor for help with an eye complaint who claimed the spirits had told him that she should go and find a tree and hang herself. However, everyone was on a high because of what the Lord has been doing.”

At the crusade the next night we met 20 year old Charles who we led to the Lord 2 years ago, and were delighted he still going strong in the Lord and a pillar of the local church. Some of the team were worried why Charles no longer had the bible we gifted him, till it was explained he had given it to his sister who had been saved a fortnight earlier. As his dad, Fred, was the local witchdoctor, he lived with his brother. The following day I was out buying maize, rice, beans and carbolic soap for the local ones in poverty when my translator, Pastor Sam, alerted me to the fact Fred was in the shop over the road, and invited me to preach to him! Mindful of curses I suddenly froze, but felt no option but to cross the road to meet Fred square on coming out of the shop. Praying frantic arrow prayers, the Holy Spirit arrived and soon Fred had given up his old life, handing himself over to his new Lord and Saviour, Jesus. The following week a delighted Charles called us rejoicing that his dad had completely changed and pouring over his new Bible, praise God.

In the final week we even witnessed to one of Dada Idi Amin’s sons! This completely turned around what we saw in picture 5, viz an old building from the 1970’s the top of which Amin’s heavies pushed off local civilians.

Nothing can diminish what we have experienced during the three weeks. It has been an incredible journey, one which the Lord has been my constant companion. It is impossible to thank him enough. All of the praise glory and honour belong to him. Not only is he my very present help in times of trouble, he is my refuge and my strength. I would not have been able to do any of the things I have accomplished without him. ( Ps 46 v 1. God is our refuge and strength, a very present help in trouble). I must thank the people who have been kind enough to help me financially, and have prayed, encouraged and supported me. I was very much aware of their prayer support. Special thanks to Catherine for holding the Street Pastor fort while i away. Matthew 10 verses 41 and 42 say: he who receives a prophet in the name of a prophet shall receive a prophet’s reward. And he who receives a righteous man in the name of a righteous man shall receive a righteous man’s reward. 42 And whoever gives one of these little ones only a cup of cold water in the name of a disciple, assuredly, I say to you, he shall by no means lose his reward.”

Pray if you feel called to join me for Walk Uganda 2015, God willing, or any of the UK missions through the year. The name of our last host was “Life Changing Church”, and this well describes the Walk Uganda experience.