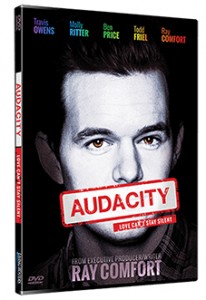 A new DVD bravely tackles the question of whether people are born gay, using one of the Bible’s most controversial verses

Are people born gay, or is it a choice? A question many have asked.

Its relevance for clergy cannot be underestimated and we have reviewed it after a vicar rushed it to us and called the office, asking us to make it widely known as a resource for clergy at a time when the Anglican Church is struggling to avoid a schism over the issue.

‘Audacity’ is a short movie that tells the story of Peter, an aspiring comedian, who not only has a fear of performing on stage but also of sharing his faith and also, like many of us, of talking to people about homosexuality for fear of being labelled a bigot.

And when faced with a life or death situation, how will Peter react and will he be prepared to defend his beliefs when challenged, even at the risk of losing a friend?

At just 52 minutes long (the right length to show in a home group with time for discussion), it is a fast-moving action story with mainly young actors who would not be out of place in an episode of ‘Friends’. In one incident, a pretty girl gets an urgent text message and starts to pray – with immediate results.

Peter’s story is interspersed with genuine footage of producer Ray Comfort’s interviews on the streets of America. In several, Ray asks people point blank if they think people are born gay, then shares what the Bible says in 1 Corinthians 6:9-10, which in Britain is enough to get you arrested.
But with great gentleness (his surname, Comfort, is apt!) Ray also asks them if they think that they are born fornicators and gently highlights that they could have been deceived.

The film does not pretend to offer scientific arguments about the biology of homosexuality, but gives Christians some excellent ideas on how to approach people about the issue of homosexuality and other sinful practices such as adultery with a loving rather than condemning attitude. One thing it does not do, however, is shy away from the consequences of sin without repentance.

Under the gloss, the message from Ray Comfort is clear. He is portraying, in a winsome fashion, what the Bible warns:“Do not be deceived.” All those who engage in acts classed as immoral – whether fornication, idolatry, adultery, homosexuality, theft, alcoholism, reviling or extortion, will not ‘inherit the kingdom of God.’

By helping the Christian viewer identify with its lead character’s struggles, the film makes it clear that we have a responsibility to let people know where they are heading if they do not change their ways.
Bulk copies of this DVD and a study DVD made up of four 25 minute sessions can be obtained from Living Waters. Tel: 01636 302230