Once deception takes hold of a nation, the first casualty is truth 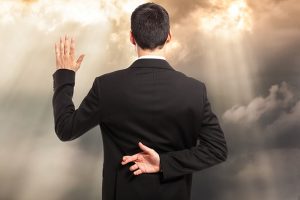 THE GREAT SHAKING of the nations that we have referred to many times in this paper is spreading right across the Western nations.

But early this year the great shaking took an unexpected turn with the Oxfam revelations in February. The shaking has reached the charity sector.

This is a new development that is going to the very heart of the moral fabric of the nation. Charities have always been highly valued in Britain. We trust them. We freely give our hard-earned money to them believing that they will use it to do good works. Faith, love and charity all go together. In fact, the Authorised Version of the Bible uses the word ‘charity’ instead of ‘love’: “And now abideth faith, hope, charity, these three; but the greatest of these is charity.” (1 Corinthians 13:13)

If we can no longer trust our charities, whom or what can we trust? Already, it is reported that donations to Oxfam have plummeted. No doubt other charities will be affected. Once the public lose trust in our charities something very significant in the life of the nation will die. 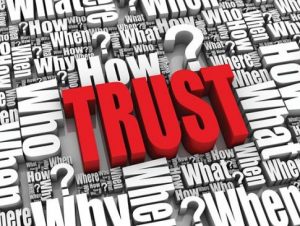 Trust is at the heart of all our relationships: it takes years to build up trustworthy relationships but only minutes to destroy. That is what has happened to Oxfam and there is a danger that it will have a domino effect right through the charity sector and beyond – to the churches and Christian organisations.

The background to this collapse in trust is the attack upon righteousness that has been building up in our Western civilisation for many years. It has come with the development of the internet and the spread of social media that has resulted in a flood of fake news, lies and deceit. Once deception takes hold of a nation the first casualty is truth.

There was a time in the history of Israel when lies and deception flooded the nation, with false prophets and teachers telling the people that there was nothing wrong and God would defend the nation against the Babylonians. Both the political and the religious leaders were peddling these lies which undermined the basis of truth.

Listen to this from Jeremiah,
“Beware of your friends; do not trust your brothers. For every brother is a deceiver, and every friend a slanderer. Friend deceives friend, and no one speaks the truth. They have taught their tongues to lie.” (Jeremiah 9:4-5)

Jeremiah could have been writing this for today, because what he is saying is true for many young people who are struggling with bullying and fake news on social media. But deception is not only in the secular world. It is also in the Church among Christians.

When the disciples asked Jesus to tell them about his Second Coming and of the end of the age, the first thing he said was “Watch out that no one deceives you” (Matthew 24:4). Today we see deception everywhere in the secular world: but also in the Church. It is often hard to spot.
In fact, deception is always close to the truth otherwise it will fool no one! So, none of us should think that we are safe from deception.

In my lifetime I have seen wave after wave of false teaching in the Church. All originated in North America and the latest one is coming under the guise of ‘The Emerging Church’ which all sounds very attractive and plausible – unless you know your Bible well enough to spot the problems.

The ‘Latter Rain’, ‘Kingdom Now’, or ‘Dominionist’ teaching is that we are now in the last days when the offices of ‘Apostle’ and ‘Prophet’ are being restored. They will lead the Church to new standards of holiness with believers performing signs and wonders, overcoming the enemies of the Gospel through miraculous powers. They will subdue the nations, establish the Kingdom of God on earth and then Jesus will come and they will present the Kingdom to him.

This all sounds very exciting but none of it comes from the Bible! The Bible very clearly says that Jesus will come again and HE will establish the Kingdom.

Preaching the Word of God

What we so desperately need today both in the Church and in the nation is sound biblical teaching! A clarion call for such Gospel teaching was given by Anne Graham at the funeral of her father, Billy Graham, on 2 March.

O that we had more Bible believing preachers in his mould, declaring the unvarnished truth to a generation filled with lies and deception. O that we had preachers who really believe the Word of God and fearlessly declare it from the pulpits of our churches, in our great cathedrals, and in humble village chapels. The tide could be turned in a single generation!

Let’s pray for a new generation of Bible-believing preachers so that the Gospel is heard once again in this land – beginning in the churches!

Dr Hill is the founding editor of Prophecy Today. To read more on these topics,
visit www.prophecytoday.uk