Lockdown has had a positive effect on family life

We all know the lockdown’s terrible impact upon the economy. It has devastated many small businesses and decimated the nation’s high streets.

There have, tragically, been plenty of reports of domestic violence and paedophiles targeting children online during lockdown periods.

But there is also good news that does not hit the headlines. It Is the positive effect upon family life that this unprecedented period has had for many people.

The Institute for Social and Economic Research at the University of Essex published research in November showing that 40 per cent of parents say that their relationships with their children improved during the lockdown period and only five per cent said that problems had increased.

Parents, particularly mothers, spent a lot more time with their children than they had been doing before the lockdown. Both mothers and fathers helped with homework, which many of them found enjoyable and the fact of actually spending time with their children, and sharing in the search for answers to questions, was very good for parent/child relationships. When we give more time to each other within the family, it has great beneficial effects.

A similar study in the USA last month found that half of all married couples reported that their appreciation of one another had actually improved during times when they were confined to home and had to spend more time together.

In Britain, the divorce rate in the past year has dropped by 70 per cent

A further research finding, both in Britain and in America, showed that divorce rates are dropping significantly. In Britain, the divorce rate in the past year has dropped by 70 per cent – that is over two thirds – which is quite amazing!  And it says a lot about commitment and our relationships with one another.

Among cohabiting couples, women were three times more likely than married women to say that their relationship had not improved, or had got worse, during the lockdown period. This shows the importance of commitment in family life.

Where a couple have committed themselves to each other there is not only the determination to make the relationship work, but when they actually spend more time together, they find greater happiness and fulfilment in their relationship.

Perhaps this is one of the reasons why God allowed the Covid virus to sweep across the nations. Most people are so busy that they don’t have time for personal relationships.

This is especially true of young couples with children. The demands upon working mothers and fathers are such that they have very little time for each other, and even less time to give to their children. The children then compensate by spending hours on their smart phones or computer games and much less time with members of their own family. 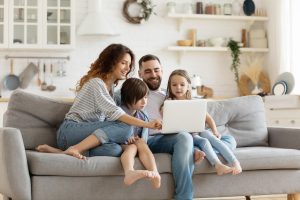 The pressure of the modern world is one of the reasons why family life has been growing weaker and family breakdown has been so widespread. This may be a reason why God has allowed the virus to spread; to force couples and their children to spend more time together. In so doing most of them have actually benefited.

The research so far has only concentrated on couple relationships. It would be really interesting to find what has happened to sibling relationships – whether the time spent together has benefited brothers and sisters who have had to learn to share and to do things together.

Maybe there is a lesson here for churches. In large congregations we usually only know very few whom we would count as friends.

The early Church grew so rapidly because they were not based in buildings like synagogues or temples. The first believers met in one another’s homes, which allowed caring relationships to develop quickly.

Jesus had just 12 disciples with whom he had intimate friendships, although there were many more whom he loved, such as Mary, Martha and Lazarus. It was to the 12 that he said, “My command is this: love each other as I have loved you” (John 15:12).

Perhaps one outcome of this unprecedented period will be to make us all re-examine our relationships, both within our own families and in our church.

Clifford Hill’s latest book, ‘Beyond the Pandemic – is there any word from the Lord?’ is available from info@issacharministries.co.uk – Office mobile 07759 042 315

See the reviews section of this paper.