With the threat of carol singing being banned this Christmas, why are the churches silent in days of great spiritual hunger in the nation?
After all, the message of God’s great love and life-changing power is good news for everyone 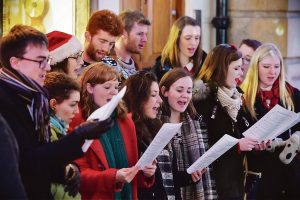 Will carol singers be allowed – or is Christmas cancelled? Advent is the greatest time of year for Christians to be praising God

Back in July, the Prime Minister said that he hoped everything would be back to normal by Christmas.

That does not look very likely now! In fact, there is no end in sight to the coronavirus pandemic. Restrictions upon people meeting together in crowded places look likely to stretch into the distant future, which inevitably affects the Church.

Will Christians be allowed to come together and sing carols this year or are our empty churches to remain silent? The season of Advent is the greatest time of year for Christians to be praising God and declaring the Gospel in a biblically illiterate nation.

The message of Advent in the midst of the cold winter weather is the outstanding bright spot in the long dark nights and short daylight hours. The message of God’s great love and life-changing power is good news for everyone.

Advent hymns and carols contribute hugely to the general feeling of well-being in society by injecting values of goodwill, giving, and caring for one another. Of course, it is easy to be cynical about the spirit of Christmas, because we know that it only lasts for a few days.  When the New Year celebrations are over, most of the goodwill disappears and people return to their normal self-indulgent lifestyles.

But it would be wrong to dismiss the effect of Christmas upon the nation as a mere passing fantasy of goodwill with no lasting effect. Despite the secularisation of the nation and the decline of church attendance since the 1960s, the popularity of Christmas celebrations has increased year upon year for several decades. Lunchtime carol concerts for people in the workplace have become popular and many churches and Christian organisations use these events for presenting the Gospel to those who would otherwise never hear its message.

Some of the readers of the online magazine ‘Prophecy Today’, to which Charles Gardner and I both contribute, have been saying that the Judaeo-Christian heritage of Britain has already been lost. But the remnants of that spiritual heritage are deeply embedded in the culture of the nation. This can be seen in the Christmas carols that are sung in supermarkets and shopping malls, which convey something into the nation’s collective spiritual arteries.

If the churches are not able to celebrate Advent this year, it will add to the depression in the nation that the pandemic and the rising tide of unemployment is bringing. Life is already hard for many people – especially those with children who are finding it difficult to feed their families, and many people are bewildered at what is happening.

The closure of churches and sporting venues adds to the depression in the nation and it is essential that Christians find ways of serving their local communities.

It is ironic that churches are closed at a time when there was never a greater need for the Word of God to reach the nation. The pandemic presents a huge opportunity for the Gospel.

But church leaders have not seized the opportunity to explain what God is doing. Most churches have been using the Internet with apps like Zoom for keeping in touch with their congregations. But most have simply followed their traditional services – with no attempt to explain the spiritual significance of what is happening.

Is there any word from the Lord?

When people desperately want to know why the pandemic is happening, the silence of the nation’s preachers is deafening!

The silence of the nation’s preachers is deafening

Even if we cannot have large meetings, surely there are many other ways of communicating biblical truth to the public? Why are church leaders not explaining what God is doing today?  We should at least be ministering to those who are frightened or comforting those who have lost loved ones.

Why are church leaders not explaining what God is doing today?

When the Apostle Paul said goodbye to the church in Ephesus he said, “I have not hesitated to proclaim to you the whole Word of God” (Acts 20:27). How many preachers can say the same today, even for people in their own congregation or living in streets around their church buildings?

Why are the churches silent in days of great spiritual hunger in the nation? God has been warning us for many years that he was going to shake everything. We have only to read Isaiah 2:12f; Haggai 2:6-7; Hebrews 12:26f, and the words of Jesus in Matthew 24, to see that God has been planning this great shaking of the nations for a long time. Jesus said all these things would happen in the days before his second coming. He told us to be prepared and to watch and pray.

Now that God is actively shaking the nations – the churches are silent! It is not only the preachers who are failing to declare the word of God, but they have not taught their people to share their faith with their neighbours. So the whole churchgoing population of Britain is silent.

Could it be that church leaders are struck dumb by unbelief as happened to Zechariah the father of John the Baptist?  It was not until he repented that his tongue was loosed, and he began praising God (Luke 1:64).

May the Lord loosen the tongues of his preachers to declare the Word of the Lord to feed the hungry and bring many into the Kingdom.

Clifford Hill’s latest book, ‘Beyond the Pandemic – is there any word from the Lord?’ is available from info@issacharministries.co.uk.