The secret and supernatural life of a salesman (part 3)

How the Holy Spirit totally transformed me

After praying with Frank, I started reading the Bible and discovered that the things that had driven me before no longer had a hold over me.

Soon I bought a Mercedes with cruise-control to ensure I stuck to the speed limit.

Then Frank invited me to a Full Gospel Businessmen’s Fellowship (FGBMFI) meeting where a barrister prayed with me to be ‘baptised in the Holy Spirit’, just as the early disciples experienced in the book of Acts.

I felt a tingling all over my body as he prayed, but didn’t receive a ‘prayer language’ straight away like other Christians talked about. For a while I felt awkward and like a ‘second-rate’ Christian, but a few months later when I was prayed for at another FGBMFI meeting, I found myself speaking fluently in a  new ‘prayer language’ I didn’t understand. Since then, it has become part of my prayer life and God has used me to speak Psalm 23 in perfect ancient Greek to a woman feeling unloved by God. 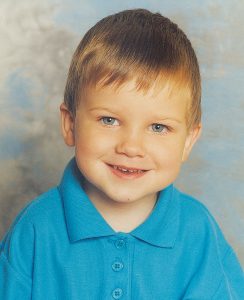 Gary believes an angel saved Christopher, 5, from
a serious accident

One day when our second son, Christopher, was just five, Liz and I both sensed that we should immediately pray for his protection.

Later Christopher told us that a classmate had pushed past and had hit his head on the corner of a desk. Blood started spurting out of the other boy’s head and he was rushed to hospital.

Little Christopher had also been pushed down to the floor, but told his parents, “It was really weird. I hit the floor, but it was like landing on a big, soft bed. When I got up, though, it was a hard wooden floor.”

We told him that God had sent an angel to break his fall and when he gets to heaven his angel will remind him about the time he squashed him!

I once prayed for a partially blind man who could barely see beyond six inches. God led me to get him to renounce Freemasonry, which he did. Then I prayed to cancel the curse of Freemasonry affecting him in Jesus’ name and figuratively removed the cable-tow around his neck. He instantly regained his sight, then ran around the room, shouting, “I can see!”

In Israel in 1995 I prayed for an infertile couple who were at their wits’ end after spending years saving for IVF; they went on to have two children. So far I have prayed for five couples who couldn’t have children, but within a month of the prayer all five mothers had conceived.

In 2000 a man tried to stab me with a screwdriver in a Guildford car park! While my elderly friend David Falkus prayed frantically in my car, I sensed I should tell the man that God loved him. As soon as I did so, my attacker froze. I believe invisible angels were restraining him, as he couldn’t move another step towards me.

A year after I became a Christian, my dad was rushed to hospital in Spain with a heart problem. I’d always had issues with Dad growing up, as he’d been very heavy-handed with his discipline. He didn’t know when to stop – usually when Mum pulled him off me. But getting saved had enabled me to finally forgive him, so I dropped everything and flew over to pray for him. During that time he also committed his life to Jesus.

I then prayed for Dad’s new friend John, a six-foot man weighing only seven stone who was dying of cancer and had only two hours to live. His relatives were gathered around his bed wearing black, waiting for him to die. I prayed with him to invite Jesus into his life then prayed for healing, but nothing happened immediately.

The next day the talk of the hospital was that John had been discharged! And most importantly for Mum and me, Dad was also sent home because the doctors couldn’t find anything wrong with him.

How I discovered that truth sells

After praying with Frank I became uneasy about using my customary sales tactics, which usually meant stretching or withholding the truth.

So I went to my next client and decided to tell the truth about the failings of our product! The directors concluded that my competitors offered a better product but told me, “We want your product, despite its shortcomings, as we can work around them. At least we will know where we stand with it.” I was amazed – the truth sells! 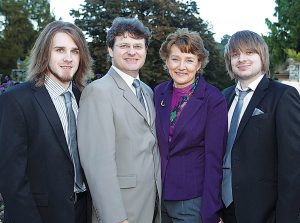 All in the family: Gary’s wife and sons Christopher (left) and Robert now work in their print and web design business

Next God got me to leave my well-paid job with a multinational company. They had sent me to a sales course in San Francisco where 10,000 professionals met together; what brought me up short was when the chairman announced: “We have two things to sell: fear and greed.”

At that moment I felt God show me that I was witnessing the end of ethics in business and that he wanted me to start a company for him, offering the same software I had been selling with my previous company but at realistic prices.

Within one day of starting our print and web design business in 1999, God sent a wealthy client whose payment covered our first three months’ wages. Now the whole family works in the business: Liz does the accounting, Robert designs the websites and Christopher works on the print and other designing.

I have also now become the national director for the Full Gospel Business Men’s Fellowship International in the south-east region. I win some business and lose others, but God always meets my needs, if not always my wants!

How my wife got ‘sold on God’ too

My relationship with Liz started in the fast lane from the outset; I met her when I was 16, proposed within three days and got engaged before I was 17! We bought our first house when I was 19 and were married a year later.

Together we made a good team. Until I found success as a salesman, Liz was a secretary and earned more money than me for many years. 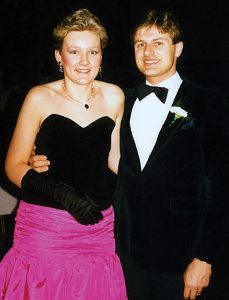 Always best friends: Gary and Liz a year before his near-fatal come-uppance

We were (and still are) best friends. We always loved our children unconditionally and agreed on how we disciplined them. The saying is certainly true that a single horse can pull two tons, but two horses pulling together can pull over ten tons.

However, although we had a good sex life, that wasn’t enough for me and I ended up collecting men’s magazines. Like every other area of my life, it became like a drug; I needed a fix, but never got satisfied.

I now realise that this addiction doesn’t spice up a marriage but drives in a wedge which eventually ruins the marriage. Without self-control, patience and a wife who is your best friend, it is very difficult to remain married these days. Thankfully, with God’s help and prayers for deliverance from a faithful prayer confidant, I am now free from this addiction.

After getting ‘saved’ as a newborn Christian, I tried to ‘sell’ Liz on God for the next 18 months using all the closing techniques I knew – and failed every time! I finally prayed: “God help me, what am I doing wrong?”

God was waiting patiently with his answer: “Are you ready to give up?”

“No,” I snapped, “I will carry on striving until she knows you.”

I repented for doing things in my own strength and asked God to help me stop pointing out Liz’s faults; within six months Liz committed her life to Jesus. She decided there must be a God, because she never thought I could have changed on my own!

The secret and supernatural life of a salesman (part 2)