The secret and supernatural life of a salesman (part 2)

After thrill seeker Gary Guillon met a man who challenged him about heaven, he discovered the peace he’d been yearning for and saw extraordinary miracles happen

Three days after Gary’s miraculous rescue from death on the M20, a man called Frank came to buy a sofa Gary was selling.

Frank paid him the money, then suddenly asked: “Do you believe in God?”

Gary thought to himself, “If I say no, what am I going to do if I need God’s help again?”

So he brazened it out as usual: “Yes, of course I do.”

“So you will be going to heaven then?” Frank asked.

Gary could only mutter vaguely, “I hope so.”

With a confidence that intrigued Gary, Frank declared, “Unless you know for sure, then you won’t be going to heaven.” 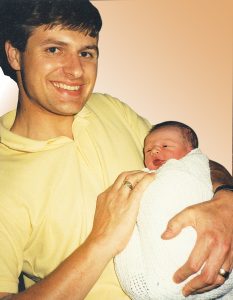 Gary with newborn Christopher in 1990

Frank explained how God’s son Jesus came to pay the price for mankind’s sins by dying a sinless death on the Cross and that anyone who believes in him can have a new licence to live with peace in their heart. Gary says, “When Frank mentioned the word ‘peace’, I realised that what I really wanted was an end to the worthless striving for a meaningless success.”

Frank produced a Bible and led Gary in a simple prayer of repentance. Although Gary wasn’t totally convinced at the time that Jesus was the Son of God, he wanted this man’s direct connection with the ‘Prince of Peace’, so he accepted Jesus as the sacrifice for his sins and asked him, through his Holy Spirit, to direct his life. 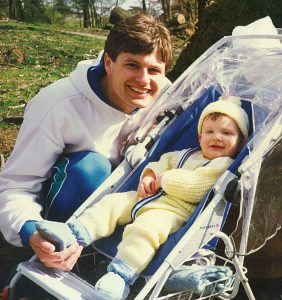 The result was dramatic. “As I knelt on my lounge carpet, I suddenly felt an amazing peace descend on me like I’d never experienced before; inside I felt completely clean and free. All the striving and concerns of life just lifted off my shoulders like a huge rucksack.”

Soon afterwards Gary started attending his local C of E church in Rainham, and a few years later, as an outward declaration of his newfound faith, he was baptised by full immersion in a bath in the Zion Hotel, Jerusalem.

Twenty-seven years on, he is established in the preaching team at Parkwood Christian Fellowship, Rainham.

The secret and supernatural life of a salesman (part 3)