THE FUTURE IS HERE

The plain fact is that we are a nation under judgement.  It is as though our MPs have been driven by a spirit of national suicide, ignoring the will of the people, determined to pursue their own desires and objectives, but having no shared vision 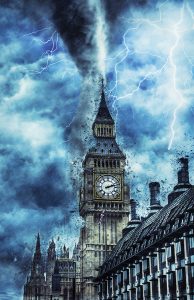 It seems a lifetime ago that I began declaring that it was God’s intention to shake everything: all our human institutions in which we trust, including the Church.

Well, it’s no longer a vague threat of what will happen in the future – the future is here! The great shaking is everyday news. We can see it all around us – the great institutions of government, of industry and commerce, the media and arts, and even the Church are all being shaken.

The prophecy in Haggai 2, which was the first biblical mention of a great shaking, included the world of nature as well as human institutions. But the shaking of our weather and the whole natural environment is also everyday news today, with secular observers using biblical language such as “apocalyptic” and “biblical proportions” to describe events like the hurricane that wiped the small town of Mexico Beach Florida off the map last October, or the destruction of the little town of Paradise levelled by flames on the coast of California last year.

In Britain we are never prepared. We are always taken by surprise. Our weather forecasters begin telling us that snow is on the way many days before it comes but when it happens – “Shock! Horror!” Our trains are cancelled, our roads are clogged with abandoned cars, there are motorway crashes, schools are closed, industry grinds to a standstill.

In spiritual things we do the same: we are a nation that has had biblical truth for centuries. We are a highly educated nation and most people can read the Bible for themselves, but few bother to do so. Therefore, we cannot understand when things go wrong. This has been the trouble with Brexit. Of course, there are lots of reasons for the months of confusion that followed the triggering of Article 50 back on 29 April 2017. It was not just inept leadership or lack of skills among our civil servants who had to negotiate with Brussels.

The major difficulty lay in Westminster with our 650 MPs, 500 of whom voted to remain and were prepared to do anything to keep Britain locked inside the European Union. But on the other side there were ardent Brexiteers who were totally committed to getting Britain out of the EU with or without a deal and were unwilling to compromise by accepting a deal that did not meet all their red lines. Hence, we had the spectacle of one Cabinet minister after another resigning and the little group led by Jacob Rees-Mogg becoming more and more hardline in their demands.

Both Remainers and Leavers have contributed to the incredible mess created by our Members of Parliament. It is as though they have been driven by a spirit of national suicide, ignoring the will of the people and determined to pursue their own desires and objectives, but having no shared vision.

Both of them claim to be Christians, therefore they know the Word of God and they deliberately chose to defy biblical commands and lead the nation astray. David Cameron swiftly brought judgement upon himself that ended his career. Theresa May cannot succeed in anything to which she puts her hand and she can only be the instrument of bringing judgement upon the nation.

It grieves me to say these things; but I and other Bible believing Christians have been giving warnings of these things for many years, saying that when we deliberately turn away from truth and righteousness there are inevitable consequences. Deuteronomy 28:28 sets out some of those consequences as “madness, blindness and confusion of mind”, which we have witnessed in our House of Commons over many hours of debates and angry exchanges.

These things were all foreseeable and they could all have been avoided if as a nation we had not rejected our Judaeo-Christian heritage and the faith of our forefathers.

Is there any hope for the future? Of course, there is! Jeremiah was still calling for repentance and turning when the Babylonian army was surrounding Jerusalem because he knew that if the leaders and people really came weeping before the Lord and genuinely turning away from their evil activities, God would have forgiven them and restored his protection over the city as he had done in the time of the righteous King Hezekiah when he sent a plague through the Assyrian army causing it to withdraw in disgrace.

God is still willing to forgive and to restore the fortunes of Britain even at the 11th hour. But surely, we are at the 11th hour now.  The future has overtaken us. Will this time of trouble bring the nation to repentance and restoration?

Clifford Hill has written a letter to Theresa May on the importance of the DUP, the small group of Westminster MPs who are all born again Christians. In the letter, she is asked to consider praying with the DUP MPs for a way forward for the nation. This was published on 22 March at www.prophecytoday.uk