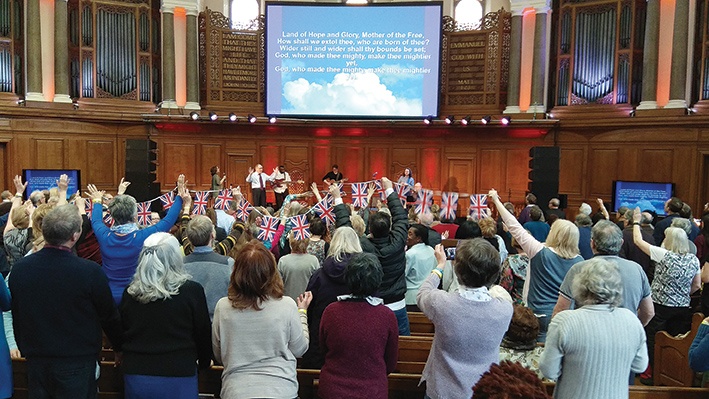 “We need a reformation in the Church. We’ve got to come back to the Word of God” – David  Hathaway

Whichever way we turn we see Britain is in trouble socially, morally and spiritually. Throughout society things seem to be going from bad to worse and in this critical situation we know God is our only hope.

For the second time in six months veteran evangelist David Hathaway called a Day of Prayer for Britain, so 1,400 believers flocked to the Emmanuel Centre in the heart of Westminster.

From the start the presence of God was in that place. The day began with powerful worship followed by exhortation from David Hathaway and Huw Priday who also ministered in song.

There was much focus on the need for change within the Church. David spoke on the lack of unity in the body of Christ where there are divisions between denominations and individuals. He then led a symbolic act of unity in which everyone present broke bread (took communion) together.

Lamenting the recent comment of Archbishop Welby that he is “ashamed of the Church”, David asked: “Why has this happened? The Church is the Body of Christ. Have we forgotten?” He prayed: “Oh God, restore the Church. Right in the centre of the body there is a sickness. Heal this sickness, Lord.”

Urging the people to pray, he continued: “As a nation we have legalised sin. The Church has departed from the Word of God and today there is no fear of sin. There is no fear of God, no fear of offending him or sinning against him. It’s not taught in the Church any more.

“Political correctness has made us afraid to offend and afraid to stand for the truth. God forgive our weakness. Give us a spirit of boldness.  Put the power back into the Church.”

Pastors were called to the front for public repentance and a number of them prayed openly, repenting of building their own ministry rather than the kingdom and of departure from God’s Word.

To the tune of ‘Land of Hope and Glory’ we sang a new anthem:

Nothing shall prevent us. By his grace we’ll stand.

David declared: “The name of Jesus must be proclaimed across this nation.”

For the next National Prayer Call he is looking to bring 7,000 people together in September.