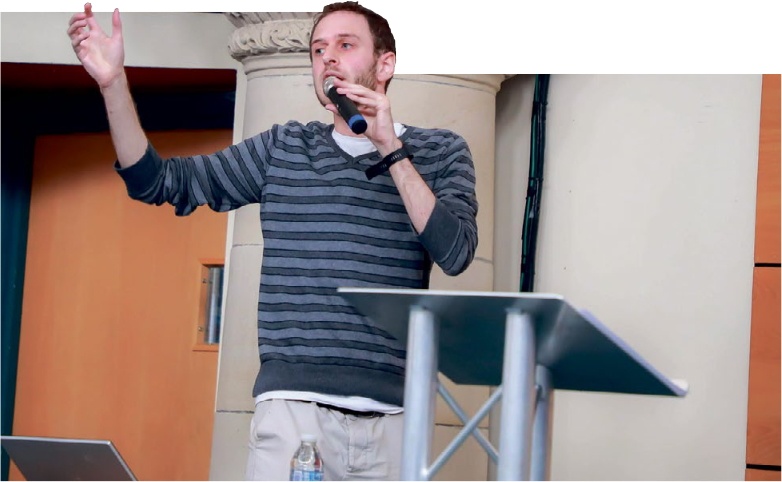 Report from the Health and Truth Summit: Media Manipulation and Control 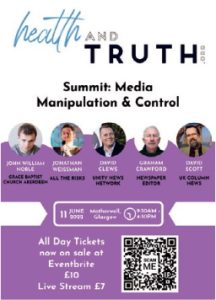 Rarely has the media been as instrumental in shaping public behaviour as in recent times.

Organised by a group of concerned Christians, the Health and Truth Summit followed an initial conference held in Northern Ireland last November.

John – William Noble, pastor of Grace Baptist Church in Aberdeen, drew parallels between Israel’s rampant idolatry in Judges 19-21 and the blindsiding of churches today, where instructions from the television have been heeded above biblical commands. He called on the Church not to repeat Israel’s mistake in covering up our recent corporate iniquity. He exhorted us to take responsibility for our decisions over the last two years and to repent wherever we have erred.

My own fully illustrated talk, entitled ‘Examining the media’s medical mismarketing’, got us banned from YouTube! I had picked four media claims that motivated my deep dive into the experimental Covid-19 ‘vaccine’ biotechnology: vaccinal mRNA breaks down quickly, the spike protein is harmless, the pharmaceuticals could not hide data from the regulators, and everyone must be vaccinated. This presentation earned the Health and Truth YouTube channel its first strike; the video was banned prior to the playback premiere even streaming.

Relentless campaigns under the guise of life-saving public health

Graham Crawford, a former weekly newspaper editor, spoke about how the mainstream media has become our chief abuser. Drawing on almost 40 years of experience in journalism, Graham traced the media’s instrumental role in inducing global fear and how they have abdicated their duty to independently scrutinise the government’s data and public health messaging that they so uncritically broadcast.

Unity News Network lead correspondent David Clews explored the lies behind the Covid narrative, uncovering private and government sources of funding behind the mainstream media broadcasters, who propagandise on their behalf. This led into an inspiring account of how independent media platforms like UNN have battled the odds to provide an alternative narrative.

In a powerful yet disturbing talk, UK Column News reporter David Scott proved that media manipulation was rife even prior to Covid. He described how UKCN has unearthed the stories shunned by the mainstream media, including the moving story of Robert Green, a courageous man imprisoned for fighting political corruption and child abuse in the high places of Scottish society.

By the grace of God, this was another highly successful event that came together under challenging circumstances. All talks are now available at healthandtruth.org.

Jonathan Weissman MSc is a full-time cybersecurity professional and part-time independent researcher into the Covid-19 vaccination programme. A fully referenced version of his slides can be viewed at alltherisks.com

The World Health Organisation is continuing negotiations for a global pandemic treaty, which many fear will seize government power from member states in the event of a new pandemic. A preliminary draft was due in August. A petition demanding a referendum before the UK signs up to the treaty has gathered over 153,000 signatures.

The UN agency is planning to expand its budget by 34 per cent by drawing more heavily on membership fees.

Meanwhile, a WHO virologist has admitted that the WHO has a ten-year plan for future pandemics. Interviewed about the likelihood of a second pandemic, Dutch scientist Marion Koopmans stated, “Yes, this has been in the WHO’s ten-year plan for some time. That plan says that there will be a major infectious disease crisis. Well, this was year one.”