Christianity is a force for good

I am concerned that the faith inquiry chaired by Baroness Butler-Sloss is calling for an end to Christian assemblies in schools and for public life to be “de-Christianised.”

It’s hard to understand the hostility towards Christianity, as it has many benefits to society. Our Judeo-Christian Ten Commandments teach that no-one should steal, lie, or murder; that we should be honest in business, care for each other, be good workers, honour our parents, respect older people, be kind to animals and forgive others.

It’s hard for society to function without a trustworthy population. Christians aren’t perfect, but the Bible sets high ideals to aim for and our world would be much better if these principles were kept today. We’d only need a small police force for such things as looking for lost children! We wouldn’t need PIN numbers and passwords if everyone was honest.

Many hospitals, schools, orphanages and charities were begun by Christian philanthropists. But now criminal gangs make counterfeit medical drugs and fake safety equipment, which is the result when ethics disappear.

On a purely practical level, Christianity is good for society and Britain’s democracy and tolerance was founded upon it. Forceful and domineering ideologies are waiting to fill the gap which will be left if Christianity goes.

Send your views on articles in this paper to
letters@heartof.org.uk 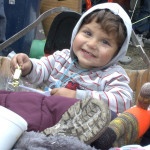 A child thrilled to be given a sweet 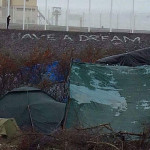 Contained but still dreaming: graffiti below the containers 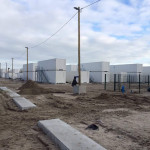 Bed but no breakfast: these Calais containers are for overnight only 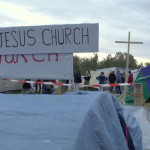 A church built in the “Jungle” 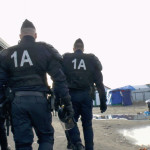 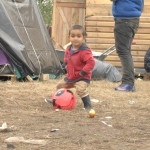 A little boy plays football close to his tent

At the end of October, my daughter and I accompanied Sienna from Eastbourne NetworX to the Calais ‘jungle’, where approximately 6,000 migrants were seeking refuge.

Sienna told us about the many refugees who had broken down in tears wanting to give up, but through a thread of human kindness from the many volunteers, they had found the strength to go on. We too listened to heart-wrenching stories of those who had lost loved ones, or been forced to leave them behind.

As I entered the refugee camp (nicknamed the ‘jungle’ by the refugees, who feel like animals roaming around a jungle), the reality of the newspapers came alive: makeshift homes were cramped together, young children ran about, some playing football, and everywhere we went people were wandering about.

We visited one of the Christian churches. There were a group of men and women filling the airwaves with fervent prayers; with each phrase in their native tongue, a loud “Amen” resounded across this area of the camp.

Many refugees are fearful for their starving, sick families; some are suffering with pneumonia from the sub-zero winter temperatures; according to Sienna an eight month old baby recently died of hyperthermia.

Now the French authorities are forcing the migrants to move to a new facility: converted shipping containers. These look more like a prison with no water or cooking facilities. Each sleeps 12 people who are only allowed in overnight, so with nowhere to go during the day, again the refugees feel treated like animals.

Entrance is by hand printing and refugees are fearful that they will be forced to stay in France, which is the law once you have your fingerprints in a country.

Sienna explained that they are feeling the effects of the anti-refugee discourse following the terrorist attacks in Paris on 13 November. Many refugees have been attacked; rumours say it was by right wing fascist groups.

In desperation some have begun to return to their homeland saying, “We die here, or we die there.”

Thousands took to the streets in Calais on 23 January to put pressure on the UK to open its borders, and show compassion to our fellow human beings.

But on the other side the media have claimed that ISIS extremists have infiltrated the migrant population with the sole purpose of destroying everyone who opposes their ideology. Increasing numbers of young people are joining ISIS: according to The Guardian, the UK’s most senior police officer revealed that five Britons a week are travelling to Iraq and Syria to join up. Young people in particular are seeking to make sense of the world, find some sort of belonging, and their purpose in it.

The world is not just facing a physical war with ideological conflicts. It is war that falls beyond the confines of the natural; we need spiritual eyes to see that it is a spiritual battle.

Neither the Government, nor the EU, or UN have a solution to the global crisis and onslaught of violence that the world is facing. They do not know how to fight a spiritual battle. It is time to see through new eyes: eyes of faith. It is time to take our place and make the difference.

I believe God would speak to his Church: “It is time to arise”.

So, for many the question is: how? I believe it is time for the five-fold ministry in the body of believers to arise, shine and stand together. God has increasingly been stirring vision in my heart, to help motivate and connect the Church. If your spirit has been stirred, then let’s connect and begin to build.

For as the world sees disaster, I see opportunity.”

Danger to Christians in French camps

When I made a return visit with four other Christians from the UK to the Calais ‘ jungle’ on Saturday 16 January, I was disturbed to learn that Christians are in danger of persecution from their Muslim neighbours in the Calais and Dunkirk camps. 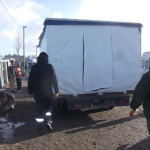 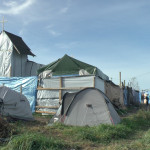 My information came from a Baptist minister from Boulogne who holds services every Wednesday among the refugees. He asked us to pray for the protection of Christians there as there are reports that an Iranian Christian was recently killed in the Dunkirk camp.  The numbers continue to swell at the Calais and Dunkirk camps, with the majority of the inhabitants from Afghanistan, Iran, Iraq, Eritrea and North Africa being Muslims.

Our main purpose was to distribute John’s Gospels in four languages and some Muslims accepted them. One Afghan, only 16, who said he is a Christian, stayed close to our group.

We visited the ‘tent’ church donated by a local French church in Calais and encouraged the young man to attend services there. A group from YWAM were also visiting the jungle for two months to witness. It is really good to see Christians supporting the work in the jungle.

Let’s also pray for the Lord of the harvest to send more labourers into this harvest field and for more conversions to Christ.

Send your views on articles in this paper to
letters@heartof.org.uk

A DRINKER’S NIGHTMARE AN END TO A LIVING HELL