Is the US awakening?

Franklin Graham, son of the great evangelist Dr Billy Graham, is calling the American Church and people to pray concerning the Presidential elections this November. 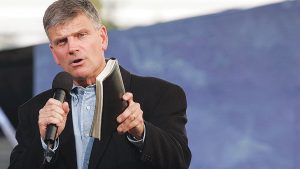 Some months ago at the beginning of the American Presidential elections, I saw Franklin Graham being interviewed on Fox TV news.  He explained how God had called him to visit every one of the 50 state capitals and call the Church and the people to prayer. His theme was “calling the nation back to God”, and for God’s choice for president. He was also led to cut himself off from all political parties and be completely independent.

His first stop was Des Moines, the state capital of Iowa, where over 6000 people turned out to pray, in an open area, on a very bleak looking winter’s morning.

To date, 29 further state capitals have been visited and the support has exceeded all expectations.  It is estimated that 140,000 people have now met to pray. But what is so wonderful is that several hundred have expressed a desire for salvation. Praise the Lord!

In accordance with 2 Chronicles 7:14, the Billy Graham Evangelistic organisation believes this could be the beginning of a great awakening and asks us to pray this and for Mr Graham’s health and protection. Spiritual awakenings in past years have often started in America and spread worldwide.

I urge other readers to give this matter their prayer support

The Impact of Brexit

The impact of Brexit is still an unknown factor. Apart from a small adjustment in the value of sterling, all the dramatic warnings of dire consequences have fallen by the wayside. Even the IMF have changed their mind from doom for the UK economy to the second highest growth rate among developed nations!

However, we should consider the effects likely to follow. Already there are warnings about the stability of some EU banks in the wake of the vote to leave the EU.  That our exit from the EU is in line with God’s will for us as a nation is beyond doubt – many Christians prayed for his will to be done. (As well as the prophetic input in that regard.)

The People’s Republic of Brighton and Hove

It’s official: the City of Brighton & Hove is suffering from cynical depression.

Under normal circumstances “coming out” is heartily welcomed here — indeed encouraged — but not quite in the way the EU referendum result defines it.

When the BBC’s David Dimbleby uttered those historic words at 4.40am on 24 June – “the British people have spoken and the answer is, we’re out” – Brighton slipped into a catatonic state and remained there for a whole day. Political leaders led the mourning with near-apocalyptic language: “devastating shock”, “deeply alarming”, “economic turmoil”.

Naturalised foreign citizens suddenly expressed acute feelings of rejection. Reactionary activists added their signatures to the infamous petition demanding the Government hold a second referendum, and the confused republican separatists started a new one called ‘Brighton and Hove Independence Referendum – Leave UK, Stay in EU’ , complete with draft passport, directed to Green MP, Caroline Lucas, who has the dubious honour of…doing something with it.

For me as an ex-city councillor turned government and politics commentator, the only aspect of this extraordinary world event (over which God continues to sit sovereignly on his throne) that brought dismay was the Christian input and reaction. As I saw the commentary on social media and debated with established Christians and those in positions of influence or leadership in the city, I could have wept.

There came a point when I could no longer distinguish between the believer and the non-believer, not just in terms of argument and reasoning (most of which was patently rooted not in faith but in fear) but also, sadly, in spirit. It became like throwing pearls to pigs (Matthew 7:6).

“This catastrophic result must be God’s judgement on the UK”, was the Christian Remainers’ conviction.

The Church in Brighton knows well how to interpret the “appearance of the earth and the sky,” but it cannot (yet) interpret “this present time” (Luke 12:56).

We value our readers’ letters but ask you to be aware that letters often have to be edited or shortened.

Send your letters to
letters@heartpublications.co.uk