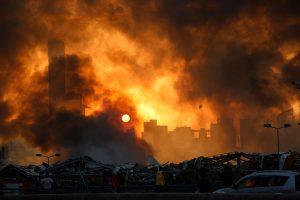 Terrorist group Hezbollah has been widely blamed for the Beirut blast that devastated the city, killing hundreds and leaving 300,000 people homeless. Former Israeli intelligence officer Lt Col Sarit Zehavi said: “Any way you look at it, Hezbollah is involved. Even if it’s just a regular accident, which this port blast probably is, Hezbollah controls both the airport and sea-port in Lebanon…”

A nation already in economic crisis has been traumatised by the disaster, estimated to have caused up to $15 billion worth of damage.

The dreadful explosion that wreaked such havoc in Beirut could have happened in London, Christian Friends of Israel’s David Soakell pointed out in his regular newsletter ‘Watching Over Zion.’ He said the group had kept three metric tons of ammonium nitrate, the explosive thought to be behind the Beirut blast, in a London storehouse – until MI5 and the Metropolitan Police discovered it in 2015!

BBC documentary producer Rosie Garthwaite has admitted sharing ‘inaccurate’ pro-Palestinian propaganda. In a separate case, a leading watchdog castigated the UK’s public broadcaster for disinformation and lies in the context of balloon attacks, downplaying the seriousness of the incendiary devices.

Iran is plotting to assassinate US Ambassador to South Africa Lana Marks in supposed retaliation for the American drone strike that killed Iranian General Qassem Soleimani in early January, according to reports, although the rogue state has already hit back by launching ballistic missiles at a US military base. Mrs Marks, a South African-born Jew and ex-boss of a luxury handbag fashion brand, is closely associated with President Trump.

Britain’s weakness towards Iran and its decision to abstain from a crucial UN vote lifting the arms embargo against the rogue regime was said to be top of the agenda when Foreign Secretary Dominic Raab visited Israel. As Christians United for Israel commented, allowing the vote to pass unchallenged, instead of standing with our allies against tyranny, was shameful.

Reports that Israel has agreed to halt extension of sovereignty over Judea and Samaria as part of its peace deal with the United Arab Emirates (UAE), Bahrain (and possibly others) have been clarified by Israeli PM Benjamin Netanyahu, who preferred to use the expression ‘delay’ or ‘suspension’. The UAE is the first Gulf Arab state to normalise diplomatic ties with Israel and only the third Arab nation to do so, after Egypt and Jordan.

A committee of Israel’s parliament, the Knesset, was stunned to learn that while tweets from President Trump are flagged with warning labels by the social media giant, those calling for the destruction of Israel by Iranian leader Ali Khamenei are not.

Other recent articles by Charles Gardner, which can be found at www.heartpublications.co.uk, include:

Charles is also now editor-in-chief of ‘Prophecy Today’ at www.prophecytoday.uk as well as a regular contributor to ‘Israel Today’ at www.israeltoday.co.il

His new book, ‘King of the Jews’, is available from Christian Publications International or Eden Books. He is also author of ‘A Nation Reborn’ (CPI), ‘Israel the Chosen’ (Amazon) and ‘Peace in Jerusalem’
(olivepresspublisher.com & Eden) – all available from Amazon.

President Donald Trump has been nominated for a
Nobel Peace Prize for the second time.

His first was for his attempts to negotiate peace between North and South Korea, but now he has been put forward for the peace deal between Israel and the United Arab Emirates (UAE).

Norwegian poltician Christian Tybring-Gjedde is behind the nomination for the 2021 prize, citing the US president’s role in the peace agreement between Israel and the United Arab Emirates that was announced on 13 August. It was closely followed by another deal with Bahrain, and both agreements were formally signed at the White House on 15 September.