A battle over Israel is raging in South Africa – both in political and theological terms.

And the only reason it’s not happening in the UK too is because we haven’t really engaged with the issues here.

I believe we should, because they amount to the question of who is on the Lord’s side. In South Africa we have the South African Council of Churches, Anglicans and Methodists kicking up a storm over Israel’s proposals for ‘annexing’ parts of Judea, Samaria and the Jordan Valley.

Standing almost alone among his senior colleagues on the side of the Jewish state, meanwhile, is Chief Justice Mogoeng Mogoeng (supported by many thousands of Christians who love Israel) who has infuriated the status quo by saying he prays for the peace of Jerusalem (Psalm 122:6), in line with his Christian faith. 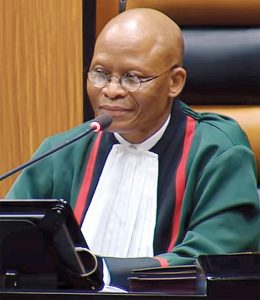 The brave judge ignited a media storm when he lamented his government’s “lopsided attitude” towards the Israeli-Palestinian conflict during a Jerusalem Post webinar in June. He is used to criticism that his faith might impinge on his job and is fearless in expressing his belief that only God can save his country from its problems. Before swearing in new MPs in May 2019, he called for three minutes of prayer or meditation for solutions to corruption, unemployment and crime in the country. Then he dropped to his knees and prayed for three minutes; some followed suit while other MPs stood and prayed.

So in recent weeks he has calmly defended his statement about Israel.

For if you believe in the absolute authority of God’s Word, as he does, Jewish presence in the Holy Land is a given (eg Genesis 15:18f, Genesis 17:8). They also have an ‘earthly’ legal entitlement agreed by the international powers at San Remo, Italy, in 1920 (I wrote about San Remo in HEART’s June/July issue).

The San Remo treaty has so far been ignored by national leaders including British Prime Minister Boris Johnson who, in spite of his Zionist credentials, is opposed to the ‘annexation’ because it is supposedly a “violation of international law” and would set back Israel’s improving relations with the Arab world. As many others do, Boris thinks that UN resolutions are the same as international law.

In the Middle East, long-term peace can only be achieved by following the scriptural signposts leading to a kingdom ruled by the Prince of Peace, the Lord Jesus Christ. The future there – and everywhere – is in his hands.

Yet Ayman Odeh, head of the Arab-majority Joint List faction of Israel’s Knesset (parliament), has participated in a press conference in which Hamas and Fatah leaders pledged to put their differences aside in order to fight Israel together over the sovereignty issue – effectively giving assent to a declaration of war against the very nation whose people he represents in parliament. This would surely amount to treason elsewhere, but super-tolerant Israel, accused of apartheid by its enemies, stoically puts up with it. 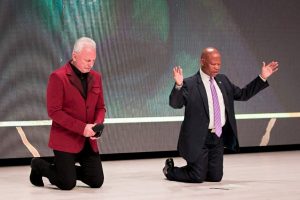 The top judge who publicly kneels before the God of justice: Mogoeng Mogoeng makes no secret of his faith

Faced with the choice of following God or man, Chief Justice Mogoeng is choosing the narrow road directed by his conscience. Boris, by contrast, is taking the wide road that will not ruffle too many international feathers while ignoring the reality of Israel’s double entitlement (earthly and heavenly) to all the land from the Mediterranean to the Jordan River.

Meanwhile the Church here is largely silent, leaving it to para-church organisations like Christian Friends of Israel to take on the role foreshadowed by the young David in the battle against the Philistines fought 3,000 years ago in the Valley of Elah, near Jerusalem.

The Philistines, who lived on the coastal plain of Gaza, were violently opposed to Israeli presence in the land, blocking up the wells dug by Abraham in a bid to deny life-giving water to God’s people.

Backed up by verbal grenades from around the world

Modern ‘Philistines’ adopt similar tactics, with rockets regularly fired from terrorist-held Gaza backed up by verbal grenades from around the world, while so-called Christians have betrayed the God they purport to follow by joining the camp opposed to Israel’s presence in the land.

And a key reason for such ‘Christian’ disengagement from Israel is ‘replacement theology’, the idea that the Church has replaced Israel in God’s eternal purposes, which is to accuse God of betraying his people by breaking his covenant with them.

But in fact God has promised that only if the sun and moon stop giving their light, will the descendants of Israel “cease from being a nation before me for ever” (Jeremiah 31:35-37).

It seems many Christians have deserted the God of Israel

As the Moabite Ruth accompanied her Jewish mother-in-law Naomi back to Israel, many Gentile Christians have been helping Jewish people return to their ancient homeland. And just as Orpah, Naomi’s other Gentile daughter-in-law, chose to return to her pagan gods, so it seems many Christians have deserted the God of Israel since the rebirth of the Jewish state in 1948.

A peaceful hideaway in the Judean hills, near the Valley of Elah, where the giant-killing young David became an Israeli hero

In the aforementioned Valley of Elah, the Israelites suffered 40 days of intimidation by the Philistines, led by their formidable-looking giant Goliath, until a young man with total trust in the Lord brought him down with a single slingshot.

The United Nations, which repeatedly issues resolutions condemning Israel while ignoring atrocities in other parts of the world, is something of a modern equivalent to the cardboard cut-out figure of Goliath. It will not stand against the God of Israel – and neither will those who align themselves with it.