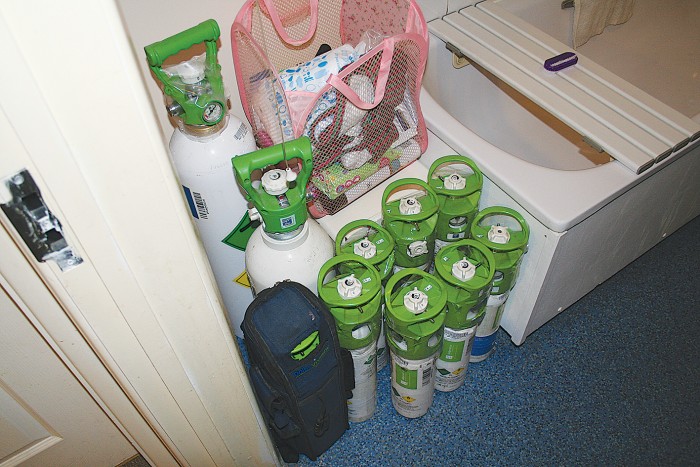 Many testified to having received their healing, with deaf ears opened and arthritis healed.  One lady was able to walk briskly and pain free from one side of the church to the other.

Pete Boughton testifies after receiving a marvellous healing on the last day of the conference. Pete says, “At 67 I feel like 21 – full of beans and feeling good!”

Pete suffered really poor health over a number of years having been diagnosed with what was thought to be asthma in his 30s. But the condition worsened and the final outcome has been pulmonary fibrosis which affected his breathing so badly that Peter had, over the past three years, to stay on oxygen.  By January this year his health had deteriorated so badly that he needed oxygen 24/7.

Not anymore.  During the ten days of the conference, New Life Family Church hosted the South African couple Nevil and Rina Norden.

This couple have planted and oversee 70 churches in Pretoria.

They prophetically ministered the word of God in such a powerful way, that both Pete and Sue were healed, along with several other people.

Pete came off the oxygen and no longer needs the huge machine or the very large oxygen cylinders installed at his home.   A giant step for him. He needed five litres of oxygen per hour from 6am till 11pm and then a further two litres per hour to see him through the night. He was so exhausted most of the time that he was unable to get to church for normal Sunday services, but they made a special effort to attend all the healing meetings, faithfully pursuing the Lord.

Today Peter is a picture of health and was able to come outside into the sunshine for a photoshoot, down a steep flight of stairs and then walked back to his flat unaided and without any breathing problems.

Sue had been at the end of her tether with worry and was unable to sleep without medication.  God touched her also and for the first time in 18 months she got her first good night’s rest without medication. She is also losing the weight she accumulated and her diabetic count is down from 12 to 5.

Over the next couple of days Peter (a Christian since 1962) was able to talk for England instead of gasping for breath. The couple – and the church – are in prayer for them as they continue to walk through their healing process, confident God will finish what he started.

On occasion, if Peter feels the need to use the oxygen, he consumes only two litres throughout the entire day, nothing like the five litres an hour he had been so used to. Sue, who has been a Christian since 1967, encouragingly tells him, “We are just NOT having it!  You are healed, Pete, and we give God the glory.  We are both healed.”

These two are true inspiration to those who have seen for themselves what God has done!  New Life Family Church pastor, Philip Young, is “highly expectant of greater things to come” and says he is “absolutely thrilled” and looking forward to receiving the next ministry team from Bethel Church and another healing meeting later this month and hearing more testimonies as well – good reports are still coming in!

This is revival.  It starts with us.  Repentant hearts, truly seeking God for who he is. The rest will follow.