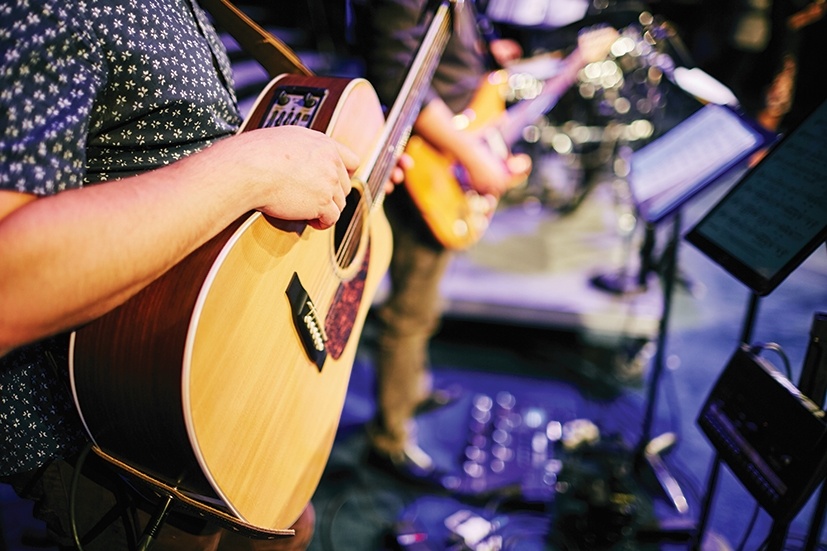 With churches closed and the focus moving to home worship, it’s time to find trusty, tuneful songs that everyone can sing without band aid

‘Why I Left the Contemporary Christian Music Movement: Confessions of a Former Worship Leader’

Drummed out of church? You’re not alone.

I knew I was getting old, but it was confirmed after I tentatively asked a church’s sound desk supremo if the volume could be turned down a bit.

I was assured that the volume was legal and regularly tested. It was politely suggested that my inability to cope with deafening decibels was due to my age. Perhaps mature worshippers should be given ear muffs as happens with babies in some modern churches?

These days, whenever I see a drum kit in its perspex box on a church stage, my heart sinks. The song lyrics and Scripture verses will be conveniently projected onto a screen, so I don’t need my Bible and notebook; the only essentials are earplugs.

Sadly, though, even earplugs don’t protect these ageing ears from the aural onslaught of a modern service’s music band, let alone enable me to hear God’s still, small voice.

Recently, I drove 80 miles to be with people who worship God “in the beauty of holiness” (Psalm 96:9). With just two singers and a keyboard, I could actually hear the congregation singing and found myself smiling as we sang a three-part harmony together.

I don’t need my Bible and notebook; the only essentials are earplugs

It’s not that I don’t like volume; I can recall thrilling times when the whole congregation roared, “Thine be the glory” – but you could hear the words.

I wonder if modern worship leaders have considered that an important witness to men (and indeed, women) is hearing other men sing? The only time I hear men joyfully singing hymns these days is in a football or rugby stadium. If sports teams like to hear their fans singing their praises, wouldn’t God like to hear his supporters too, rather than just another skilled performance by a select, spot-lit handful?

I found answers in this book by Dan Lucarini, written in 2002 and reprinted twice since, most recently in 2010. I wish I’d found it sooner.

In fact, it’s one of a small stable of books written over the past few decades to warn about the adoption of secular music styles in churches. As Marion Daniel of Sozo Ministries points out, rock music came into fashion over 60 years ago, and while church leaders initially resisted, eventually the world’s music infiltrated the Church.

Born out of rebellion (‘rock and roll’ was slang for the act of procreation), rock music emphasises the ‘off ’ beat which apparently goes against the natural rhythm of the heart and has various unhealthy side effects, including raising adrenaline levels.

It baffles me that many clean-living Christians who haven’t been out clubbing the night before get treated to dimmed lights and blaring rock music on a Sunday morning. The essence of God’s holiness is his ‘set apartness’; surely a ‘seeker’ needs to see a difference between the nightclubs they are used to and worship music used to welcome the presence of God.

It is thought that secular music styles at unrelenting volume will keep young people entertained. However, one issue with rock music is that the pounding beat keeps people in thrall, while the lyrics become secondary. I doubt whether young people mind what they’re singing while they’re mesmerised by the beat – but other forces are listening. It was Dr Clifford Hill who pointed out that before the 2015 Paris massacre at the Bataclan hall, the audience was singing along to “Kiss the devil.”

Dan Lucarini gives answers to this dilemma; he really does have the T-shirt, having been responsible, as a musician and worship leader, for introducing contemporary Christian music (abbreviated to CCM) to churches. He doesn’t believe in ‘blended’ services, either, where a couple of traditional hymns are followed by ‘rockier’ songs.

In fact, the book serves as a public apology to all the congregations where he introduced contemporary Christian music.

He explains in depth why he reverted to a more traditional, conservative music style and refutes the standard arguments that I have already heard, such as music needs to be ‘culturally relevant’. “John MacArthur warned us that the rush to make churches user-friendly… has become an excuse for importing worldly amusements into the Church in an attempt to attract non-Christian ‘seekers’ or ‘unchurched Harrys’ by appealing to their fleshly interests.”

Lucarini contends that baby boomers, those who came into church leadership in the mid-1980s, were not thinking primarily of ‘seekers’ when importing CCM into the house of God: “The bottom line was that we simply wanted our music in the Church, not what we perceived as our parents’ or grandparents’ music… We have the same self-centred, self-indulgent spirit of the 1960s and 1970s but now it has been given a veneer of Christian dedication.”

Lucarini claims he has yet to hear legitimate reasons why Christians are offended by traditional music, when CCM “has a sensual beat, is closely associated with worldly lifestyles and splits churches”. He also blames it for hurting a generation of older Christians.

The only convincing reason he has heard for abandoning traditional music is that it can seem boring or irrelevant, far lighter charges than those he brings against CCM.

The second part of this review will examine some of Lucarini’s answers to common justifications for CCM, as well as his personal solutions for drum-free congregational worship.

Lockdown has, I hope, led to a pruning of our musical props: can we re-evaluate what the “heart of worship” truly means and get used to bringing a “sacrifice of praise” again instead of unwittingly letting ourselves be carried along by the ‘charisma’ of the music?

If the future is in small home groups, it must be time to dig out ‘Mission Praise’, which has page after page of accessible, anointed songs.

To read the second part of this review click here.