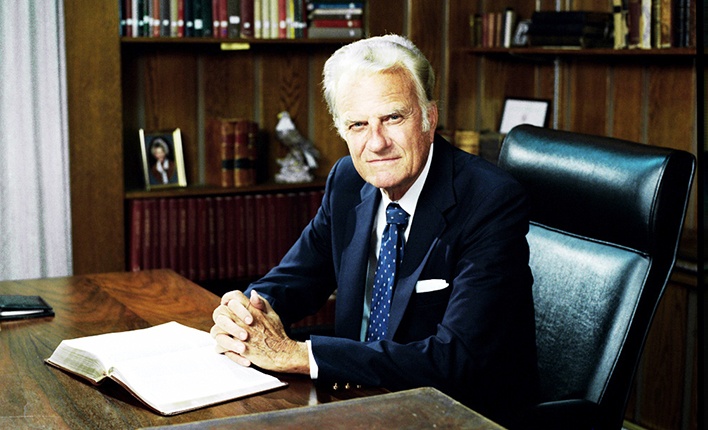 No one in history preached to more people than Billy Graham, who died aged 99 in February.

In Britain, a staggering 389,000 people came forward at Billy Graham crusades during his visits to the UK, according to the Billy Graham Evangelistic Association. He preached ‘live’ to 215 million around the world, and to around 2 billion on TV, videos, films and the web.

But his greatness was not just a matter of numbers. He became ‘America’s Pastor’, as George Bush Snr put it, praying with every president from Truman to Obama. He also advised national leaders around the world, including our Queen, and was influential in the civil rights movement in America.

Christian journalist Dan Wooding recalls that Billy even met with North Korean dictator Kim il-Sung: “As we had both been to North Korea, we would have long chats about whether Kim il-Sung had given his life to Christ after Billy had talked with him. Billy was even planning to go back to go fishing with Kim and told me, ‘I was going to challenge him out on the lake to give his life to Christ, but then he died and I didn’t go.’ So we will never know, this side of heaven, what happened to the North Korea leader who had a Christian mother.”

Anglican evangelist J John, who himself drew 24,000 people to his JustOne evangelistic event in London last summer, said: “Billy brought the evangelistic rally into the modern technological age; he went to Russia and China in the darkest days of communism, he counselled morally compromised politicians and he even appeared on comedy programmes.”

Saddleback Church pastor Rick Warren, author of the mega-selling ‘The Purpose Driven Life’, said Billy was among his mentors: “One of the things that a lot of people don’t know about Billy Graham is that he was also an encourager to pastors. One time in Amsterdam he brought in 12,000 evangelists from all around the world. I had written a Bible study method and Billy had brought a book for every one of those evangelists and had me come in and teach it.”

But perhaps those who will best remember Billy Graham will be those who ‘got up out of their seats’ and found Christ after he preached.

HEART reporter Charles Gardner says several members of his own family came to Christ through Billy Graham. Also a Jewish lady called Helen Macintosh, who led a class for new Christians that greatly impacted him, “was a product of the famous 1954 Graham crusade in Haringey, north London.”

US Vice President Mike Pence’s children made commitments to Christ at Billy’s 1999 outreach in Indianapolis. His son and daughter were only eight and six, but wanted to go forward, so Pence accompanied them, and the children prayed with a volunteer. Pence said: “I’ll always believe in my heart of hearts that night, that walk, and that prayer – just like it did for millions of Americans – made a lasting difference.”

David Coffey, former General Secretary of the Baptist Union, made his first public commitment to Christ in the landmark Haringey crusade in 1954. David says: “I could recount stories from every decade of my life when I was spiritually blessed under the influence of Dr Graham’s ministry. I count myself in the vast global multitude of those who claim Billy as one of their spiritual mentors…”