Israel is an enduring theme within the Bible’s ‘big picture’, starting in Genesis and running right through to Revelation.

This was brilliantly illustrated by guest speaker Dr Calvin Smith of King’s Evangelical Divinity School during the Christian Friends of Israel (CFI) annual conference, attended by around 300 people.

Yet this ‘big picture’ has often been distorted by the Church’s historical anti-Semitism, which has produced an over-emphasis on the Fall and redemption at the expense of Creation and consummation.

Over three sessions, Calvin highlighted how God works both at the levels of the individual, the community and the whole cosmos, and at a national level, dealing with whole nations. Thus many prophecies indicate that, far from being replaced by the Church, the nation of Israel still has an important role to play in the last days.

Calvin’s coverage of these topics gave us much food for thought, as well as clear explanations of some of the long words used by theologians and visitors crowded to buy his books afterwards! 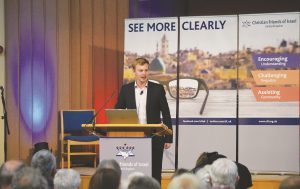 The other guest speaker, Jonathan Farrell of StandWithUs UK, spoke about the situation on the UK’s university campuses, where many Jewish students encounter prejudice and hostility – along with any others who take a positive stance towards the modern State of Israel.
Jonathan described the major challenges that he and his colleagues face in their work to help counter such anti-Semitism. During his advocacy work, he is frequently asked, “Why are you doing this?” by Jewish students, who are puzzled that he should be taking their side.

While he receives a stipend from the charity, StandWithUs UK, Jonathan made it clear that it his Christian conviction that enables him to endure the work that sees other enthusiastic Zionists burn out after about three years.

David Greer, the chair of CFI’s trustees, spoke of the situation for Jews in Britain; anti-Semitic attacks were “off the scale” in the first six months of this year.

Meanwhile CFI continues to take stands both spiritually and literally at big Christian events, such as CRE, where its reps give out literature and engage with visitors, and it regularly takes clergy to Israel, where its long-established work in Jerusalem continues.

A short film by CFI’s David Soakell on the ministry’s work in 2019 can be seen on the CFI YouTube channel.

With thanks to Robin Lane