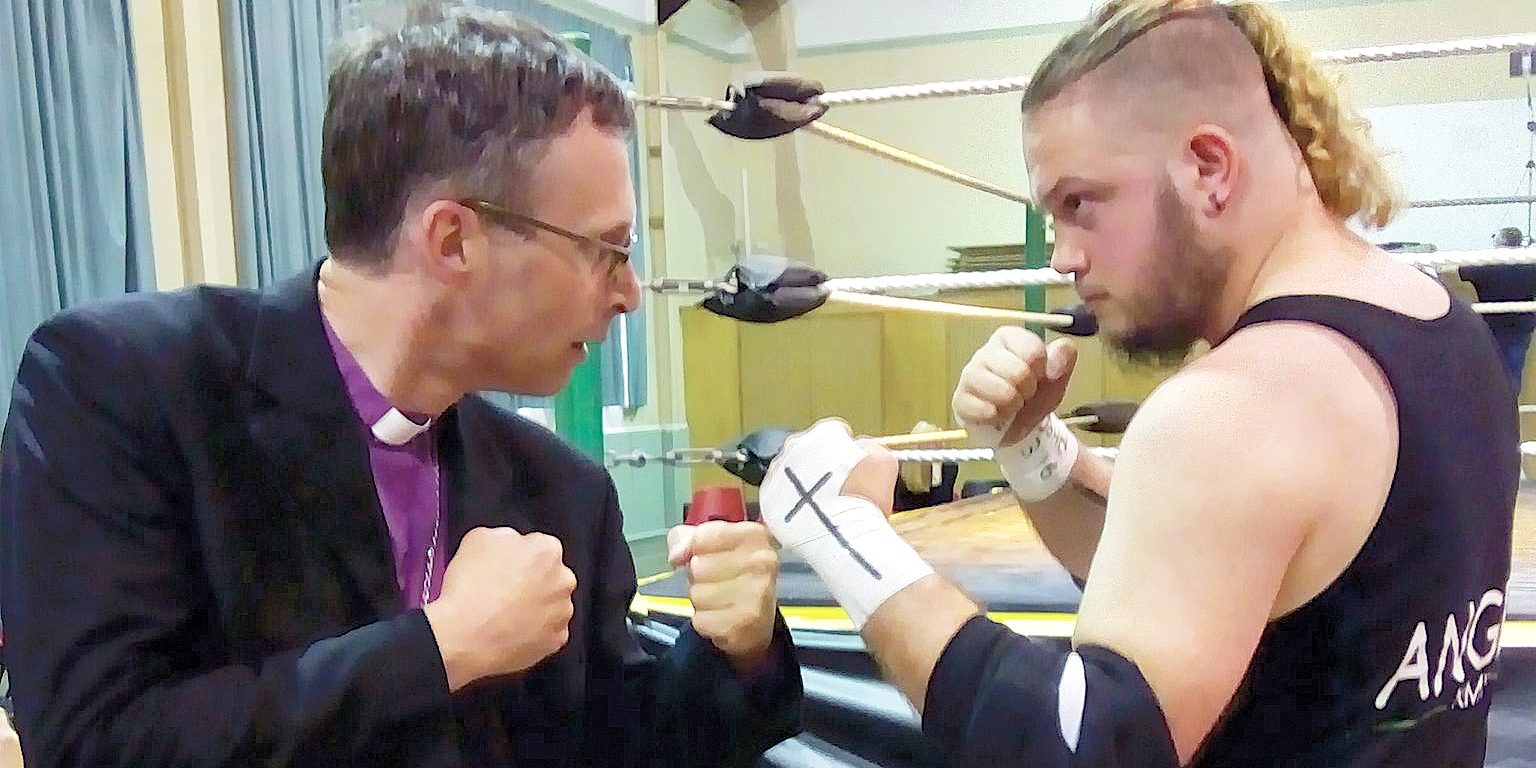 “Pray, eat, wrestle, repeat” is the motto of the wrestling champ who survived sexual abuse and sleeping in a skip

LIGHTS beam onto the wrestling ring and the crowd roars as the contender waves his rippled arms and gets ready to grapple with his opponent.

Not many people would know that ‘Gareth Angel’, to use his ring name, had offered to pray for his opponent before the fight began.

Nor would they realise that for the professional wrestling champion, 33, the real grappling happened when he was younger – surviving sexual abuse and sleeping homeless in a rubbish skip.

Gareth Thompson has won over a dozen championships across six different companies. But he recalls that his childhood was only about struggling to survive.

“My parents divorced when I was six and after this my mum hit the drink hard; she became abusive and unhinged.

“My dad wasn’t to be seen at all. I would often have to take my two younger brothers to school, feed them and find my mum in pubs to get the house keys from her.”

Gareth’s only escape was staying with his Catholic grandmother on Friday nights, who prayed with him. His mother went out at weekends and the boy had different babysitters. She was not to know that her son would be preyed upon by one of the babysitters, who violated Gareth sexually between the ages of seven and eight.

“This made me withdrawn, very meek and placid. I was confused, hurt and scared. I didn’t know what to do, how to stop it. I finally plucked up the courage to tell my mum one night.

“I spent eight weeks sleeping in a skip”

“This was 11 November 1995. I remember clearly because of the poppies that everyone was wearing. That night I was taken to the hospital and examined, and my abuser was arrested. Shortly after, there was a trial and once it was all out in the open I thought things would improve.

“My mum took it really hard, though, and I was bullied at school.”

At 15, Gareth was thrown out of home to fend for himself. He hadn’t finished his GCSEs, so started working as a window cleaner.

“I lost my job quickly and spent the next eight weeks sleeping in a skip before finding myself at Bradford Foyer, a homeless hostel.”

Gareth found a girlfriend there and they moved to his home town, Keighley, where they struggled with debt. One day, on the way to get Gareth’s tongue pierced, the couple met friends who invited them to church.

“I felt my heart ripped open”

“This church was different – no pews, no organ. A live band, comfy seating, open space to worship and dance – you could interact. During the worship time, I felt my heart ripped open.

“I was absolutely blubbering”

“I caught myself crying and a real sense of home and love that I had never felt before came over me. I tried to act like a hard man, but I was absolutely blubbering. I had attended a Catholic school as a child, but this was completely different. This was personal and relational; it was about love, forgiveness and redemption.”

After the service, a man came over and told him, “I know why you were crying. God has told me that you’ve just felt love for the first time in your life, and you didn’t know how to deal with it.”

That message made up Gareth’s mind. “I decided to give this a shot; I gave my life to Christ and things moved pretty quickly.”

Although he started attending church regularly and did an Alpha course to learn more about Christianity, his relationship with God remained “surface level” outside church.

He got married in March 2011, but experienced grief when his grandmother died the same night. His wife also later left him for another man.

“I almost instantly retreated from God, feeling hurt and blaming him for her death. I thought things were supposed to be better once you were a Christian, but I wasn’t looking at my life the right way.”

The same year, Gareth started training as a professional wrestler: “Wrestling had been a massive escape for me as a kid – I used to love characters with ‘superhuman’ capabilities.” He progressed quickly through the training school and was soon doing shows part-time.

“God, I’d love to be able to forgive my abuser”

A friend from church, Dave Kendall, noticed that Gareth was attending Sunday services less often and offered to mentor him one-to-one. He encouraged Gareth to pray and read his Bible daily and helped him get out of debt. This led Gareth to make peace with both his parents, as well as his ex-wife.

However, the issue of his sexual abuser remained on his mind. In 2013, he prayed a simple prayer: “God, I’d love to be able to forgive my abuser, but I need you to help with that, because I’m stuck.”

The very next day, he found himself in front of his former abuser. The man, released from prison for his deeds, turned up at the computer exchange store where Gareth was working as a supervisor.

“Here I was, face-to-face with the man who caused me so much pain and changed the course of my life forever. My first thought was that I could hurt him and make him feel what I felt. I wasn’t a little boy any more; I was a man.

“My second feeling was fear and trepidation. But ultimately I had two choices – make a move or make an excuse.

“I handed him his DVDs, looked him in the eyes and said, ‘I forgive you.’ I felt a huge weight lift off me. I was ‘freaked out’ yet it was OK; I needed that closure.”

The amazing timing of their encounter proved to Gareth that he could entrust his life to God: “From then on, I started taking God seriously.”

Gareth’s life improved and in 2015, he joined The Light Church in Bradford. He struggled internally with the question of what to do with his wrestling career now he was a Christian; some people at church felt that wrestling was too violent, although he personally describes the sport as “safe but spectacular”.

“I asked myself, ‘Why am I doing this? Is it just an ego trip?’” But one day, while listening to a sermon, he realised that he could use the platform that wrestling afforded him to share his faith with others.

“Once I got serious with God, I chose the name ‘Gareth Angel’ to reflect my faith. Having grown with Jesus, I’ve also evolved as a character, quoting Scripture, praying before my matches and doing my best to be a positive role model and ambassador for Christ.”

God was taking care of Gareth’s personal life, too, and in October 2018, he married Beth, whom he met at church; their first child, Isabella, was born on Valentine’s Day 2020.

“I never imagined I’d be performing in front of crowds, with Jesus in my heart”

Today, Gareth works part-time for Christians Against Poverty, a debt counselling charity, and part-time for his church. He also has his own ministry (gtministries.co.uk) with Christian Vision for Men, performing at churches and gatherings on the weekends: “We’ve seen hundreds come to faith [in Jesus].”

He adds: “My T-shirts say: ‘Pray, eat, wrestle, repeat’. There are kids wearing those T-shirts, praying with me during my entrance.

“I never imagined that I would be performing in front of crowds, with Jesus in my heart, and be leading others to know him. I am blessed beyond my wildest dreams and thank you, Jesus, for not giving up on me.”

“I’m a work in progress, as we all are,” says Gareth, who says that forgiveness has been the key to moving on. Here are his tips.