Christian Concern, Christian Voice and other ministries have investigated

Did a sermon bring down the government? 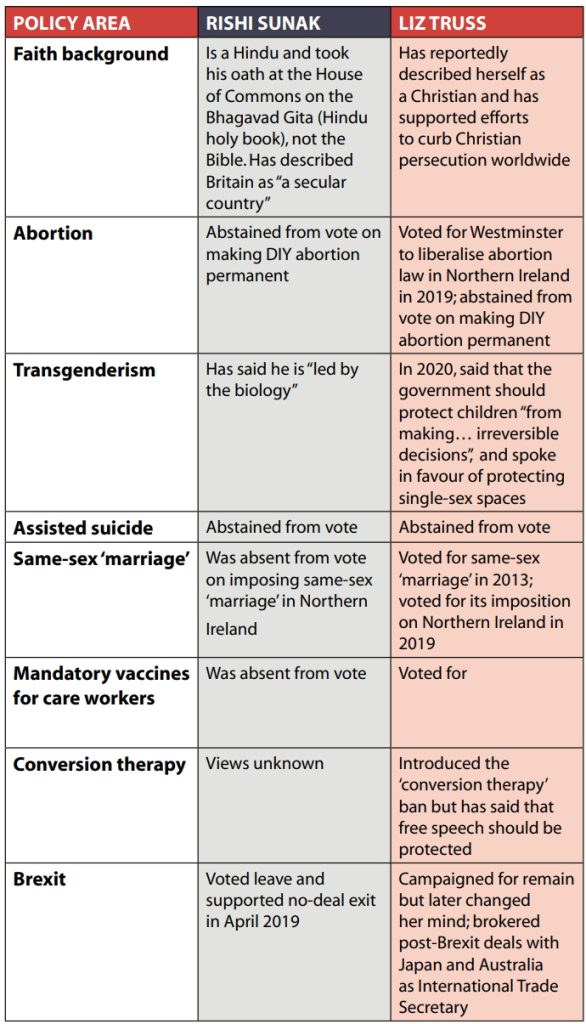 Former Health Secretary Sajid Javid, initially among the many candidates to replace Mr. Johnson as Prime Minister before pulling out of the race, revealed that a sermon on integrity had prompted him to quit the government.

Invited to a parliamentary prayer breakfast by a Christian MP who is a good friend, Sajid Javid listened to Rev Les Isaac, founder of Street Pastors. This was in the wake of Prime Minister Boris Johnson’s promotion of a colleague despite being made aware of earlier misconduct.

Javid told the BBC’s Sunday Morning Show: “I was listening to him talking about the importance of integrity in public life and, just focusing on that, I made up my mind.”

Evangelical Alliance leader Gavin Calver said that this was surely indicative of “the power of prayer and our message in the midst of chaos in our nation.”

Future PM Will be “WEF globalist”

Both Conservative party leadership candidates are “World Economic Forum stooges”, according to Christian politician David Kurten, leader of the Heritage Party. Rishi Sunak and Liz Truss have both spoken at WEF conferences.

In addition, Sunak “has family ties to a technology partner of the World Economic Forum [WEF] that has advocated for a Chinese Communist Party style economy complete with trackable, digital identities and currency,” according to The National Pulse.

His father-in-law is the founder of information technology company Infosys, an
official partner of the WEF. The Infosys president, Mohit Joshi, has written in favour of “unique digital identit[ies]”, citing Chinese Communist Party policy as an example. There are concerns that the WEF could use such technology to develop a global social credit score system.

Writing in The Daily Telegraph on 16 July, Rishi Sunak said he would shorten clinical trials, which is concerning for those who think the Covid injections were rushed.

Plea to leadership Candidates: stand up for Christian Principles

Christian members of the Conservative party have written an open letter to the leadership candidates, urging them to uphold Christian teachings if they become PM.

The letter states: “It is Christianity that has driven true social progress, from the abolition of slavery to universal education and prison reform. As a potential leader, you have the opportunity to build upon this heritage by… boldly standing for the truths of the Christian Gospel.”

Conservatives for Christ is a new organisation, led by Daniel Dieppe, seeking to promote Christian values within the Conservative Party.

Where the Candidates stand on Israel

Neither Rishi Sunak nor Liz Truss are outspoken critics of the Jewish state.

Prophecy Today UK reports that Liz Truss in particular has spoken very warmly of Israel and last November we reported on the agreement she signed to partner with Israel in cyber, tech and defence.

In a speech to the Commons, Rishi Sunak also spoke admiringly of the Jewish population in the UK: “Despite only ever forming a small percentage of the population, British Jews have shone in almost every field. They have inspired and entertained, created and innovated.”

Kemi Badenoch, whose leadership bid was admired, although she was eliminated, has written in The Jewish Chronicle of the horrors of the Holocaust and the importance of remembering it. She has also spoken out about the BDS stance of Ben & Jerry’s, the ice cream producer.

“I will raise up a foreigner”

Boris Johnson’s downfall was prophesied in January by Tomi Arayomi of Pioneers Church, who has previously prophesied Brexit and the resignation of Theresa May.

In a YouTube video dated 22 January, he related a prophecy he had received for the UK: “Number 10, your days are numbered. I have not found a man who can fill this seat, so I will raise up a foreigner and an outsider shall lead them – a backbench betrayal, resignations and dismissals. For with just one finger I will shake those who thought they were mighty. For the bridge that was needed to get you on the other side of Brexit I will declare I no longer need.”

On 13 July he received a second prophetic word which we attempt to summarise here: “I’m turning over a new chapter. Not only a new chapter; a new book and a new day is dawning for the UK. It will be similar to the days when Barack came into presidency… “You have crossed over past the old bridge… I will expose your puppet masters that I might cut the strings.”

He also saw two Scottish referendums, with the Scots wanting to be free of the UK Parliament, but told Scotland, “Do not be deceived: it will advance the spirit of Europa and not the Spirit of God.”

There was a warning for the Scottish leader, without naming Nicola Sturgeon: “I have audited Boris and I will audit your Scottish leader. The horn that exalts itself above me I will humble. I will show you, Scotland, that a face of independence has another face of dependence…”