THE CROSS IN THE CROSSFIRE

TOUGH DECISIONS FOR CHRISTIANS: Will it be an offence to promote the cross?

This is our second extract from a short but challenging booklet by Sister Joela Krüger of Germany’s Evangelical Sisterhood of Mary, the order founded in the ruins of World War Two by Mother Basilea Schlink 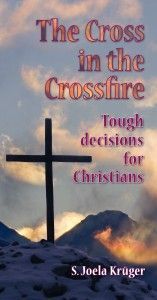 “The pleasure-seeking lifestyle of our consumer society – avoiding or rebelling against troubles, pressures and unpleasant situations – programmes us for ‘falling’, writes Sister Joela, of an era which is seeing the introduction of ‘negotiable’ genders

Jesus was, is and always will be, “destined to cause the falling and rising of many in Israel, and to be a sign that will be spoken against” (Luke 2:34).

The time has now come when more and more Jews are welcoming him with the words, “Blessed is he who comes in the name of the Lord!” (Matthew 23:39).

Yet ever since the early days of the Church, attitudes between Christians and Jews who believe in Jesus have been troubled by theological fallacies that have marred relationships. An agreement was reached in Acts 15, but the situation was eventually reversed and the Church taken over by Gentile believers.

In our times, Ecclesia is beginning to see her own blindness. She is beginning to recognise her Jewish roots in the light of Romans 11 and to see the Jewish people as her elder, firstborn brother.

Jews who have found Jesus as their Messiah are being grafted back into the olive tree as natural branches. This is a process we need to support, playing our part in it as the younger brother. Otherwise the time may come when we are no longer spared and our own branches are cut away from the olive tree.

So let us work and pray for this vision of Jewish and Gentile believers growing together. Then God’s original purpose will be accomplished, and he will “create in himself one new man out of the two, thus making peace, and in this one body reconcile both of them to God through the cross…” (Ephesians 2:15-16, emphasis added).

And as we draw nearer to the time of Jesus’ second coming, it is his cross that will unite or divide us.

How we perceive the cross will determine our future, and none of us will be able to dodge the issue indefinitely. For each of us personally, there will be a “falling” or a “rising”.

The pleasure-seeking lifestyle of our consumer society – avoiding or rebelling against troubles, pressures and unpleasant situations – programmes us for “falling”.

But by learning to carry our cross we will grow strong as we discover that the Lord is there to help us. “Rising” will be a joyful reality for us here and now in the 21st century. We will know “the cross that lifts up my head … the joy that seeks me through pain”, as the old hymn puts it.

At the same time the cross is being marginalised in more subtle ways.

In 1 Corinthians 1: 22-23 we read, “Jews demand miraculous signs and Greeks look for wisdom, but we preach Christ crucified.”

By nature most of us fall into both categories. We have just described the educated “Greeks”. But what is meant by “Jews” looking for miraculous signs?

It’s easy to get discouraged because today’s Church seems to demonstrate so little of the authority Jesus gave his disciples. Where are his promises?

Painfully aware of our powerless Christianity, our helplessness in the face of illness and suffering, we are on the lookout for any sign of God at work.We are enthusiastic when “something happens”, when we see proof that Jesus is victorious and reigns supreme. After all, he is no longer on the cross: he is risen and we are on the winning side!

Yes, this is the truth. But when we overemphasise it, focussing on victory to the exclusion of the cross of Jesus – when signs, wonders and fulfilled promises are not balanced by cross-bearing and discipleship – our teaching becomes lopsided.

The problem can be rooted in unbalanced exposition of the Bible, or in shallow biblical knowledge.

Sometimes outward circumstances are a factor. In our understandable desire to lower the threshold for the “unchurched”, we play down anything that could hinder people from receiving the Gospel. But if media and music groups end up visually obscuring the cross, a spiritual shift of emphasis can result.

Let’s face it: there is no battle-free zone. We are undergoing training for the times ahead. We need to grow in strength, alertness and discernment.

Today we are reaping what has been sown. Over the last few decades we have gradually become accustomed to tuning out uncomfortable topics in our outreach.

Immorality, adultery and abortion are among the issues avoided for fear of putting off new members. The long term consequence is that sin and hell become taboo subjects.

So far we have been free to opt for such tactics, but increasingly they are being imposed on us. A “gender mainstreaming programme”, promoted by the UN and supported by numerous NGOs (non-governmental organisations), is being enforced – without democratic legitimisation – by means of “top-down” strategy.

The unclear terminology is a deliberate part of the strategy. The aim is to introduce “gender justice”, overthrowing established gender roles and opening the possibility of further options.

In simpler terms, “gender mainstreaming” means that the differences that by nature distinguish man and woman, father and mother, are now considered negotiable, because gender identity is a matter of personal perception. The ultimate objective is to put same sex partnerships on a par with traditional marriage and families, with the same legal privileges.

No matter how tolerant the arguments sound, the hidden agenda is the breakdown of the family unit. The end result will be the breakdown of the nation. This constitutes a further step towards the legalisation of sin. Speaking of sin is on the way to becoming a punishable offence. After all, it involves a value judgment. Anyone daring to use the term could be discriminating against someone else and offending their feelings. The consequence could well be a fine or even prison. This bleak future has already begun.

Hell-fire preaching was yesterday – and that’s well and good. But now we are seeing the opposite extreme, for there is no neutral ground. Fun has long since taken the place of fear.

Hell is presented as a place of amusement, as entertainment, as “cool”. The devil promotes hell – Jesus warned us of it.

Doing away with sin and hell is in fact a triumph for hell. Next on the agenda is the cross. Though it is still accepted as a symbol, its real meaning and the spiritual power it represents are rejected and hated. The time may yet come when anything that reminds us of Jesus’ atoning sacrifice will be banned.

Global networking and the increasing potential of monitoring and surveillance systems are already leading us as Christians to a time of decision, if we are serious about our faith. There will be little room for hangers-on.

Next issue: Wanted: Fireproof Christians. How to prepare for the times ahead

General information about the Evangelical Sisters of Mary is available on their website: www.kanaan.org
(click on the British flag)