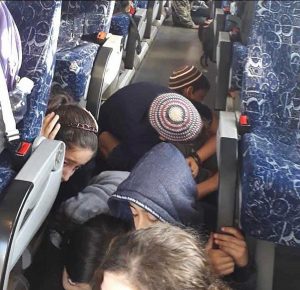 Cameras captured the moment when a Hamas rocket attack on Israel directly hit a road near Gan Yavneh during the bombardment in the days after the Israeli forces took preventative action by assassinating a leading terrorist in Gaza in early November who was said to be planning a major attack.

From 12 November, Gaza-based Islamic terrorists launched over 400 rockets at Israeli civilians, targeting 110 plus cities, towns and communities across Israel, including Sderot, Tel Aviv, Rishon Letzion, Holon and many other Israel areas. 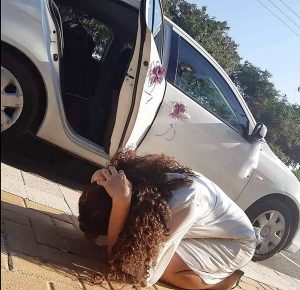 On her way to a wedding, this woman crouches next to her car during a rocket attack

One 8-year-old girl had a heart attack when the rockets fell. David Soakell of Christian Friends of Israel, who was in the country at the time, wrote, “Imagine if it was your country. What would you do if you were on your way to a wedding or to school?”