Eco-protests have cost the police – and taxpayers – more than Grenfell and two terror attacks combined, while its devotees show religious fervour 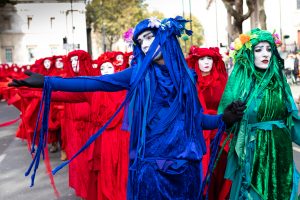 Well, we’ve had the kids playing truant to protest against climate change. Now it’s once more the turn of the adults, who have taken to playing with fire engines to make their point.

Buying a de-commissioned appliance off eBay, Extinction Rebellion campaigners tried in October to hose down the Treasury façade with fake blood – organic water mixed with beetroot – to protest government investment in fossil fuels.

Except they lost control of the hose, and managed to drench both themselves and bystanders before threatening to bring more chaos to London. By 7 October, 280 arrests had been made. 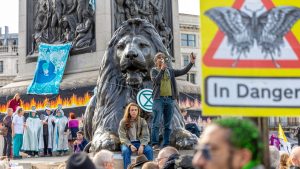 Metropolitan Police assistant commissioner Nick Ephgrave said it had placed more strain on the police force in 2019 than the Grenfell Tower fire and the London Bridge and Westminster terror attacks combined had done in 2017. Since April, a record 83,000 frontline officers have been diverted from normal duties to tackle the eco-warrior pandemic.

Daily Mail columnist Richard Littlejohn hit the nail on the head by referring to these protests as the “new religion” of “eco-fascism”.

“When people stop believing in God, they believe in anything”

“Not for the first time,” he wrote, “I find myself quoting Chesterton: When people stop believing in God, they don’t believe in nothing; they believe in anything.”

Littlejohn also revealed that Shadow Chancellor John McDonnell, who gave the cause his unequivocal support on Radio 2’s Jeremy Vine show, had trained as a Jesuit priest, and said that, because climate action is seen by the establishment as a ‘righteous’ cause, as opposed to countryside marchers in the past, the police had been treating them with kid gloves.

The Extinction Rebellion (XR) movement has many of the marks often associated with those generally perceived as religious fanatics, except that it’s counterfeit.

If the protestors knew more about God and his Word, they would be aware that the Father of mankind is fully conversant with the eco-system and the troubling effects of its deterioration.

The Apostle Paul makes clear that the earth is in “bondage to decay” due to sin entering the world (Romans 8:21), while the Apostle Peter warned that, “the present heavens and earth are reserved for fire, being kept for the day of judgment and destruction of the ungodly (2 Peter 3:7).”

The present earth will indeed be destroyed – but by God, not carbon emissions created by man. Some 2,700 years ago, the prophet Isaiah wrote: “The earth will wear out like a garment… but my salvation will last forever…” (Isaiah 51:6).

True freedom for men and women, and the earth itself, will only be found through the righteous blood of Jesus that has already paid the price for the sin of all who put their trust in him.