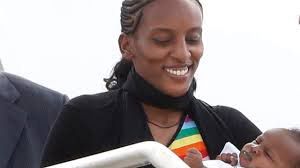 A SUDANESE mum imprisoned for her faith who fled to the USA after escaping a death-by-hanging sentence during her second pregnancy has been given the National Religious Broadcasters’ President’s Award for her bravery in front of 4,300 media and ministry professionals at the 2015 International Christian Media Convention in Nashville, Tennessee.

Meriam Ibrahim, aged 27 and a doctor by profession, was jailed last May for alleged apostasy by a Khartoum court with an allegation that she had converted from Islam to Christianity, despite evidence that she had always been a Christian.

A false charge of adultery was also trumped up against her for which she faced a sentence of 100 lashes. She had to give birth to her daughter Maya with her legs in chains during her six months in prison and officials told her she would be hanged when her daughter was two years old.

Meriam, receiving the award, praised her ‘wonderful’ husband Daniel, and thanked supporters. She also promised to pray for those who had prayed for her during the ordeal.