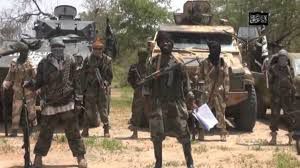 LIKE ITS COUNTERPART – the Islamic State in Iraq and Syria to which it has declared allegiance – the Boko Haram Islamist group continues its killing machine in Nigeria, Cameroon – and now Niger and Chad have been targeted too.

The reports of deaths of Christians and moderate Muslims at the hands of the terrorists seem never ending. Some 90 people were recently slaughtered in Cameroon.

It is believed that Boko Haram has been provoked to more violence following military action against the group from Chad and the African Union.

The last week of February alone witnessed five violent incidents. Suicide bombers killed 17 people at Biu bus station in Borno State and another 17 victims on board a bus in Potiskum, north-east Yobe State with 30 injured. A third suicide bomber killed 10 people in Kano City when he stepped off a bus. Some 15 people also died when bombs were thrown at a bus station and university in Jos City, central Nigeria. A little girl thought to be eight years old killed five people near a market in Potiskum when she blew herself up.