Egyptian police have prevented a terrorist attempt to bomb a Coptic church in northeast Egypt. 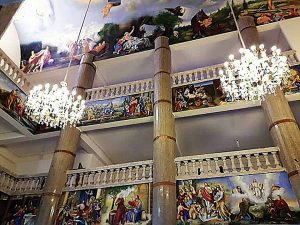 The partially-renovated inside of Mar Girgis church, El-Arish, Egypt

The Mar Girgis (St George) church in El-Arish, which was also attacked during anti-Christian violence in August 2013, was saved by state security forces outside the building. The attackers’ vehicle was destroyed.

About 15 terrorists clashed with police in a series of attacks in the town on 16 October. The National Bank of Egypt was targeted, as well as the church. Three policemen and three civilians were killed.