Mum of eight slain for Christ

Husband lost his brother too and fears for his children but he refuses to stop sharing the love of Jesus Christ in eastern Uganda.

A MUM of eight in eastern Uganda was murdered by an Islamist mob when her husband converted to Christianity.

Mamwikomba Mwanika was dragged from her home in Kalampete Village, Kibuku District, on October 19 – just a month after her husband’s brother was also killed for his faith.

It happened at 9pm when there was a knock on the door. She opened it to find a gang of Muslim men demanding to see her husband George.

Her children said their mum told the men her husband was not there.

One of the men told her: “Your husband has followed the religion of his brother, and we had warned you people to stop these activities, but our message has landed on deaf ears.”

The men threatened to kill Mamwikomba if her husband did not appear and then they dragged her, screaming from the house.

One child, 13, said: “The attackers dragged our mother outside the house as she screamed and cried for help.”

Later some neighbours arrived and found three of the children, including nine and 11-year-old girls, in the house. Two other minors were at boarding school and three older children aged 19, 22 and 24 were not home.   George also returned home and a search discovered his wife lying in a pool of blood 100 metres away. She was unconscious and then died en route to the nearest hospital.

Samson Nfunyeku, George’s brother, died in the village on September 23 after defending the Christian faith in a religious debate with Muslims.

Husband George said he had been under pressure from threats by Muslims, not known to him, since the murder of his brother. He was told to stop his witness for Christ or face death like Samson. Now he fears for his own life and also for his children.

He said: “I know that the attackers are looking for me. We are seeking God’s protection and his peace. May God give me the courage to continue sharing the love of Christ to those who are lost, as Jesus said we should love our enemies.”

“We really need prayers,” he added.

THE General Superintendent of Assemblies of God in Iran has left the country after attempts to work with the government failed and his Christian network was put under pressure.

Rev Sourik Sarkissian has sought refuge in nearby Armenia despite spending the last two decades trying to work with Iran’s government which takes a hardline approach to Christian witness.

The Farsi News Network reported that things came to a head when the AOG church in Taleghnai Avenue in Tehran was closed by the authorities in May 2013.  All books in the Bible College Library were taken by Iranian revolutionary guards, as well as those in the church bookshop.

Witness Rev Henri Manoukian suffered a heart attack as he watched the guards and he was sent to Chanakkale in Turkey for recovery. Yet his salary payment, organised by Rev Sourik, was then stopped by the government.

Accused rapists of two sisters are released from court

TWO Muslim men who allegedly raped two sisters near a Pakistani village field where they had been to the toilet have been acquitted after a witness was put under pressure not to testify and given a bribe.

The reported attack happened in the village of Jaranwala, Faisalabad on 20 November 2014. Both girls, who cannot be named for legal reasons, suffered an ordeal which lasted the whole night when they were taken to a house to be raped.

trial to collapse at Jaranwala Trial Court on October 10. He also blamed a legal official for not giving support.

Both accused men were acquitted on October 15.

The judge said: “The prosecution evidence contains a large number of material infirmities and contradictions, and the benefit of them, necessarily, is to be extended to the accused.

“This leads this court to the obvious conclusion that the prosecution remain unsuccessful to provide its case against the accused beyond [any] shadow of doubt.”

“We didn’t get justice,” said the father later, who also cannot be named. “We face serious life threats from the culprits now as they are being released from jail.”

The father said he would appeal to the high court but he and his family live in poverty, hence needing to use the field as a toilet. The British Pakistani Christian Association is supporting them.

In another saddening case, a Christian schoolgirl in Pakistan was beaten by her headmistress and locked up for using toilets reserved for Muslim girls. Christians are seen as ‘unclean’ by Muslims in Pakistan.

Would you like to live like a refugee? Probably not, but campaigning organisation Open Doors is suggesting you pack your suitcase, sleep on the church hall floor and mark your house with a sign such as IS put on the doors of Christians in Iraq and Syria.

The idea is to identify with suffering Christians and Open Doors will provide six weeks of daily Bible readings and prayer to help yo enter into the life of people who have to flee for their faith. They say it is ideal for Lent – and a lot less pleasant than merely giving up chocolate…

It is not only those fleeing IS and the Syrian civil war who will be in danger of freezing this winter.

There are still almost 200,000 Holocaust survivors living in Israel today, and most of them are in their 80s and 90s. Jerusalem Prayer Team has launched an appeal to provide blankets and warm clothes; winter in the Middle East can be much colder than one expects because the buildings are constructed to keep out the blistering heat of spring and summer. 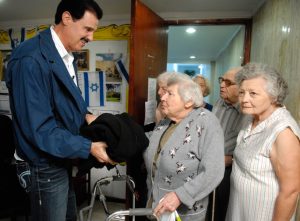 The government does what it can to help, but the constant threats against the very existence of Israel require immense investments in military preparedness, leaving little for other purposes–no matter how worthwhile.

Holocaust survivors receive a special stipend from the government, but it is not enough to provide food, medicine, and heat for their tiny apartments in the cold Israeli winters. Mike Evans of Jerusalem Prayer Team says, “I understand the need because I’ve sat with many of these people in their homes. I’ve seen the tears in their eyes as they told of their need. Jesus said if we have done it to ‘the least of these,’ we have done it unto him.”

This was Chris Eyte’s last page of Persecution Watch reports for HEART. His research and dedication has been hugely helpful in highlighting some of the many cases which should concern any fair-minded reader. If you or someone you know would like to take on a research role and send in similar cases for future issues, do contact the editor via the website: www.heartpublications.co.uk