Neither Bomb nor Bullet

Archbishop on the front line 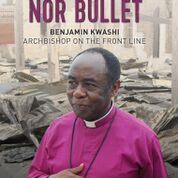 ‘Three times they’ve tried to kill me. They’ve come close. But each time just makes me more determined to live my life to the full for Jesus.’

So says Nigerian Archbishop Benjamin Kwashi in this new biography by Andrew Boyd, a Christian author based in Storrington, West Sussex. 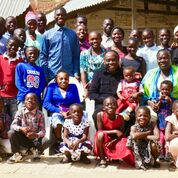 Ben Kwashi’s story draws us right into the battle raging for the heart of Nigeria. Thousands have been killed and thousands more driven from their homes. But men of faith, such as Archbishop Kwashi, are standing firm.

Boko Haram want to turn Nigeria into an Islamic state. And armed raiders are slaughtering Christian villagers. But the archbishop knows that neither bomb nor bullet can separate us from the love of God.

‘Whatever the gunmen do; when the suicide bombers do their worst, God’s message will always be: “I love you. I have given my Son for you. Turn to Him and live.”

Ben Kwashi’s story is a call to adventure – to live the Christian faith to the full, fully trusting in God – the key to a fruitful life.

Neither Bomb Nor Bullet has forewords from Baroness Cox, Archbishop Foley Beach and Paul Robinson, the CEO of Release International, which supports persecuted Christians around the world.

Paul Robinson writes: ‘In the face of imminent danger, Ben and his wife Gloria are willing to give their lives daily to joyfully serve God, knowing today could be the one in which they are attacked, injured, or killed.’

Neither Bomb Nor Bullet raises vital questions about how we should live and act as followers of Jesus is a world where conflict is our everyday context. When it comes to speaking truth to power, living sacrificially and loving extravagantly, we all have much to learn from the archbishop’s courageous example.

‘God has done wonderful things in my life,’ he says. ‘I am so grateful! I have learnt so much that I want to share with you. Jesus is faithful. He has a message to the nations. God loves you. Give your life fully to your Father in heaven and he will do great things!’

Archbishop Kwashi is the General Secretary of GAFCON, the Global Anglican Future Conference. As well as telling his inspirational faith story, Neither Bomb Nor Bullet lays out a pathway for discipleship in the form of a heartfelt letter packed with practical advice on how to live a life worth living.

‘Life is short. I hope my story will challenge you to live to see God’s kingdom come, on earth as it is in heaven. To live for Jesus, and, if necessary, to die for Jesus.

‘Life is an adventure! Let us live it to the full!’

Journalist Andrew Boyd has reported from Nigeria, where Christians face attack from Boko Haram terrorists and Islamist militants. Neither Bomb Nor Bullet is drawn from almost 100 hours of interviews with Archbishop Kwashi.

Andrew Boyd has written more than a dozen books, including Baroness Cox: A Voice for the Voiceless. He is a spokesman for Release International.

Extract from Neither Bomb Nor Bullet

‘They say your life flashes before you when you are about to die. They had tried to kill me before but failed. But today I knew my time was up.

‘The assassins had returned. They had smashed their way into my house. There were forty of them. With guns and knives.

‘My killer stood before me, shaking. Adrenaline or drugs. Maybe both. “Man of God, let’s go!”

‘They had marched me to my room to kill me. And I was saying my prayers.

‘Gloria, who had been raped and almost killed by them before, had prayed there would be no more bloodshed. My only prayer was they would spare Gloria and the children. The only blood shed that night would be mine.

‘Prostrate on my face on my bedroom floor, surrounded by my killers, I prayed: “Even though I walk through the valley of the shadow of death…”

‘They say your life flashes before you when you are about to die. What would I make of mine?’