She had been told to hide the necklace despite other staff wearing hijabs, turbans and Hindu bracelets

A Catholic nurse who was forced out of her job for wearing a small cross has won her discrimination case against the NHS.

Operating theatre nurse Mary Onuoha was harassed by bosses who claimed she violated the dress code. In a landmark ruling, an employment tribunal de- clared in January that Onuoha’s demotion to a clerical role constituted victimisation and harassment.

She had been told to hide the necklace despite other staff wearing hijabs, turbans and Hindu bracelets. Mrs Onuoha was supported by the Christian Legal Centre.

The Croydon Health Services NHS Trust has apologised and altered its dress code “to ensure it is inclusive and sensitive to all”.

The Christian Legal Centre’s CEO Andrea Williams said: “It was astonishing that an experienced nurse, during a pandemic, was forced to choose between her faith and the profession she loves.

“I hope Sajid Javid pays attention. It would be easy to amend the guidance to clarify that the wearing of crosses by medical staff must be permitted.”

CHILDREN will be ‘dangerously unsupported’ if government plans for a conversion therapy ban go ahead, according to the Association of Christian Teachers (ACT).

ACT has sent a letter to Education Secretary Nadhim Zahawi expressing alarm that teachers and school counsellors could face criminal prosecution for discussing gender/sexuality with pupils.

The letter warns this could lead to teachers not discussing identity issues with confused youngsters, for fear of a legal backlash. The broad definitions of ‘counsellors’ and ‘conversa- tions’ in the plans could particularly affect Christian teachers.

The letter says: “Allegations leading to criminal convictions and a bar from working with children, could result for any adult who does not affirm a child into a trajectory towards changing sex/ gender. This would inevitably mean that children will remain dangerously unsupported due to teachers/professionals being wary of criminal prosecution.”

Children with autism or special educational needs and disabilities are more prone to gender dysphoria, according to ACT, be- cause of differing neurological traits. This could result in these children undergoing ‘radical medical or surgical procedures’ when they most need ‘measured and complex support’.

Christian schools and pupils asking for prayer could also be undermined by the plans, the letter added.

ACT has asked the government to ensure it will not be a criminal offence for those in the teaching profession to express the view “that God made humans male and female, in his image, and has reserved sex for the marriage of one man and one woman”.

The consultation is continuing.

The ‘gay cake’ case, which ran for years and was finally settled at the UK Supreme Court, was ratified at the European Court of Human Rights on 6 January.

The Court rejected an appeal by gay campaigners against the decision by the UK court that Ashers Baking Co had the right to refuse to bake a cake carrying a pro-gay marriage message.

“This was about freedom of conscience, speech and belief”

The Christian Institute, whose lawyers have supported Northern Irish Christian bakers Colin and Karen McArthur since the dispute began in 2014, welcomed the ruling.

Spokesman Simon Calvert said: “The UK Supreme Court upheld the McArthurs’ rights to freedom of expression and religion. It was disappointing to see another attempt to undermine those rights, so it is a relief that the attempt has failed. I’m surprised anyone would want to overturn a ruling that protects gay business owners from being forced to promote views they don’t share, just as much as it protects Christian business owners.”

The Evangelical Alliance also welcomed the decision. UK di- rector Peter Lynas commented: “This case was about freedom of conscience, speech and belief, and whether someone could be forced to create a message they profoundly disagreed with. To- day’s ruling protects everyone from compelled speech.”

The Christian Institute reports that a group of 25 independent girls’ schools has agreed that boys who identify as female are not admitted.

The Girls’ Day School Trust (GDST) is committed to single-sex education for girls on the basis of biological sex only.

Chief Executive Cheryl Giovannoni explained: “Under current laws and guidance, the GDST believes that an admissions policy based on gender identity rather than the legal sex recorded on a student’s birth certificate could jeopardise the status of GDST schools as single-sex schools.” Transgender campaigner Debbie Hayton hailed the Trust’s stand as a sign that “common sense might be returning”.

US evangelist Franklin Graham’s rescheduled UK tour will visit Liverpool (14 May), South Wales (21 May), Sheffield (25 May) and London (16 July) this year.

The preacher’s 2020 tour had to be postponed due to the pan- demic and the cancellation of bookings by some venues after gay activists complained. Graham’s organisation, the BGEA, claimed religious discrimination and won compensation.

Currently there are no bookings for Scotland or Northern Ireland.

Entry to the events is free of charge and churches have been offered evangelism training. For more information, visit GodLovesYouTour.org.uk 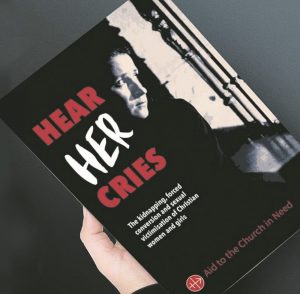 An ad campaign by Catholic charity Aid to a Church in Need was taken down by Facebook in November.

The campaign, Hear Her Cries, highlighted the sexual violence against religious minority women and girls by militants and religious extremists in Africa and Asia.