The General Medical Council (GMC) has lifted its ban on a doctor offering abortion reversals after dismissing every allegation against him.

Christian NHS consultant Dr Dermot Kearney had been blocked from providing Abortion Pill Reversal treatment in May 2021 by an Interim Orders Tribunal. A spurious complaint had been made against him by a pro-abortion doctor, Jonathan Lord, whose objections were described by the GMC as “hearsay”.

Dr Kearney was supported by the Christian Legal Centre, which was due to take the case to the High Court. The CLC’s chief executive, Andrea Williams, said: “The abortion lobby’s mantra of ‘My body, my choice’ should extend to a women changing her mind about going through with an abortion. The abortion industry does not want to give women that choice…

“Many women feel unbelievably grateful to Dr Kearney for helping them to save their babies.”

According to Christian Concern, Dr Lord “has also been accused by a woman who had faced a crisis pregnancy of pressurising and ‘scaring’ her into giving evidence against Dr Kearney”.

Christian Concern’s press release continued: “Caseworkers for the GMC dismissed every allegation against Dr Dermot Kearney and concluded that there is no case to answer. They found that the women he had supported had received high-level support and, following expert evidence, that abortion reversal treatment is safe.”

Abortion providers had claimed, without any credible evidence, that Dr Kearney’s treatment was dangerous.

Dr Kearney said: “I have been the victim of a co-ordinated campaign by senior figures in the abortion industry who have been determined to prevent women in urgent need from accessing abortion reversal treatment.”

DIY abortion still not over

Earlier this year the government announced that the dangerous pills-by-post abortion scheme would end in England in August, but in March the House of Lords voted to make such chemical abortions permanent.

Their amendment to the Health and Care Bill was due to be voted on in the House of Commons as we went to press.

70 per cent wanted an immediate end to home abortions

The Lords’ vote ignored the fact that the majority of the public does not support ‘DIY’ abortions. A government consultation on the issue found that 70 per cent of respondents wanted an immediate end to home abortions and only 22 per cent were in favour of the policy continuing.

Over 600 medical professionals had demanded that the service should be abandoned. An undercover investigation found that abortion providers were not carrying out basic safety and ID checks before posting the pills, and a poll of GPs found that most were concerned that home abortions were taking place way beyond the legal limit and that more women were being coerced into abortion.

Yet Baroness Sugg argued in the Lords vote that home abortions have “created a safer and more effective service”.

After a group of church ministers warned the Government Equalities Office (GEO) that they are willing to face jail if conversion therapy legislation bans them from teaching their faith, the government promised that religious beliefs will be protected.

However, whether this will work in practice remains to be seen.

Over 2,500 UK clergy had signed a letter to the Equalities Minister, Liz Truss (who combines this with her main role of Foreign Secretary), warning that the current proposals would outlaw beliefs on marriage and sexual ethics, and that praying for someone with unwanted same-sex attraction would be illegal.

Rev Ian Paul, a member of the Church of England’s General Synod, told Premier that while government officials said “it was not the intention of the government to outlaw mainstream Christian religious practice”, they were still determined to bring in the ban.

He continued: “Those two claims seem to us to be incompatible, and irresolvable.”

Already, some businesses and organisations are intimidating Christians. A website hosting service, Torrix, removed the website of Stanley Road Baptist Church in Morecambe, Lancashire, because the pastor signed the anti-conversion therapy letter. Torrix’s owner, Matt Fletcher, said he cannot support anything that opposes the LGBTQ+ movement.

Other evangelicals who signed the letter have also experienced a hostile backlash. According to Christian Today, there has been a “co-ordinated and hostile” campaign by LGBT activists.

One of the co-authors of the letter, Rev Graham Nicholls, told of hostility “in the press, social media and from your church denominational leaders such as bishops and from professional bodies” which included “slanderous” accusations.

Meanwhile Core Issues Trust, the team which includes ex-gay Christians, has produced “An International Declaration on ‘Conversion Therapy’ and Therapeutic Choice” for churches and individuals to sign: https://iftcc.org/the-declaration/

The Christian Institute reports that, in a debate on a petition demanding that the government make changing legal sex easier, the former science teacher stated: “Human beings, like all other mammals, cannot change sex. At the moment of conception… apart from rare abnormalities, there are two possible outcomes.

“Sex is immutable, however much an individual may want to change their sex through surgery, hormone treatment or by changing their lifestyle.”

Cates, who spoke strongly against further Covid restrictions in Parliament last December, has previously argued that the denial of biological sex poses a serious risk to women’s rights and women’s safety.

A Christian doctor fired for not using transgender pronouns was about to fight for his views in the High Court as we went to press.

Dr David Mackereth, a disability assessor, was dismissed by the Department of Work and Pensions (DWP) in 2018 for refusing to call a transgender woman ‘she’, due to his belief that gender is determined at birth.

He says those who oppose transgender ideology are being “coerced and threatened.”

In 2019, David claimed discrimination against his Christian faith at an Employment Tribunal. But the panel judged that his traditional view of gender is “incompatible with human dignity”.

Andrea Williams, head of the Christian Legal Centre which is supporting Dr Mackereth, says that if the Tribunal’s view is not overturned, it “will have seismic consequences” for anyone “who is prepared to believe and say that we are created male and female”.

Meanwhile, former Prime Minister Tony Blair told The Times that ordinary people “don’t like” the transgender ideology being “shoved” at them. He said the Labour Party must come down on the side of women, adding that voters in his former constituency “would think you were bonkers” if you told them not to say “pregnant woman”. 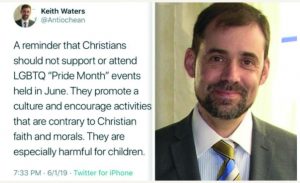 A pastor has begun legal action against a school which made his work there impossible after he tweeted that Pride events are harmful to children.

Pastor Keith Waters worked as a caretaker at the Isle of Ely Primary School, Cambridgeshire, until the school told him he had brought the school into disrepute and issued a final written warning.

He resigned in 2019 after the school treated him in an “uncaring and hostile way” and made it clear that he could not express his Christian beliefs and keep his job.

He also suffered a campaign of abuse, including a funeral director being sent to his family home to “plan his funeral”.

Supported by the Christian Legal Centre, Pastor Waters There will be a trial in Cambridge this week before a full Employment Tribunal, where his lawyers will argue that the Isle of Ely primary school interfered with his rights to freedom of religion, expression and thought. claiming constructive dismissal, indirect discrimination and breach of public sector equality duty.

Schools tell kids not to refer to ‘mum and dad’

Four Brighton primary schools are telling children to call their parents ‘grown ups’ rather than ‘mum and dad’.

Premier reports that the aim is to avoid discrimination against ‘non-traditional families’.

Elizabeth Harewood of the Association for Christian Teachers’ (ACT) commented that to erase the “unique roles” of a mother and father is “symptomatic of a culture that’s being increasingly taken in by certain progressive ideology”.

Newman University in Birmingham – named after a Catholic cardinal – is warning its students that the Bible “includes themes of sexual violence and abuse”.

The report in the Daily Mail gave the example of King David’s affair with Bathsheba, now marked ‘SV’ to denote sexual violence. Students are also warned about domestic abuse in St Augustine’s Confessions.

One online commentator opined that these warnings could turn the Bible into a “very good book” and a ‘must read’ for curious youngsters.

Former Anglican bishop Dr Michael Nazir-Ali said: “University should be a time when students are exposed to different aspects of the human condition… My issue with warnings is how far do you go before you end up with some form of censorship?”