A Christian mother who was helped by a pro-life vigil herself has raised over £20,000 to challenge a vigil ban at the High Court. 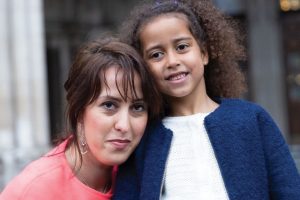 Alina Dulgheriu with her daughter, who is alive today because of a pro-life vigil

Alina Dulgheriu needs £50,000 to appeal against a High Court decision that upheld Ealing Council’s right to create a ‘buffer zone’ around an abortion centre. The zone effectively criminalises anyone who prays outside the clinic or protests within 100 metres of it

Mr Justice Turner approved the ban on 2 July, saying it was a “necessary step in a democratic society”.

Ms Dulgheriu was offered support outside an abortion clinic by a pro-life vigil in 2011, which saved her baby: “I was given another choice, which meant that I could have my beautiful daughter. Since then I have regularly attended vigils in London to offer the same help and support to other women.”

Christian pro-life campaigner Clare Carberry, spokesperson for the Be Here for Me Campaign, told Premier she was shocked by the High Court ruling: “This is the first time since the 16th century, I believe, that normal prayer has been made criminal in the UK.”