It’s time to back Israel 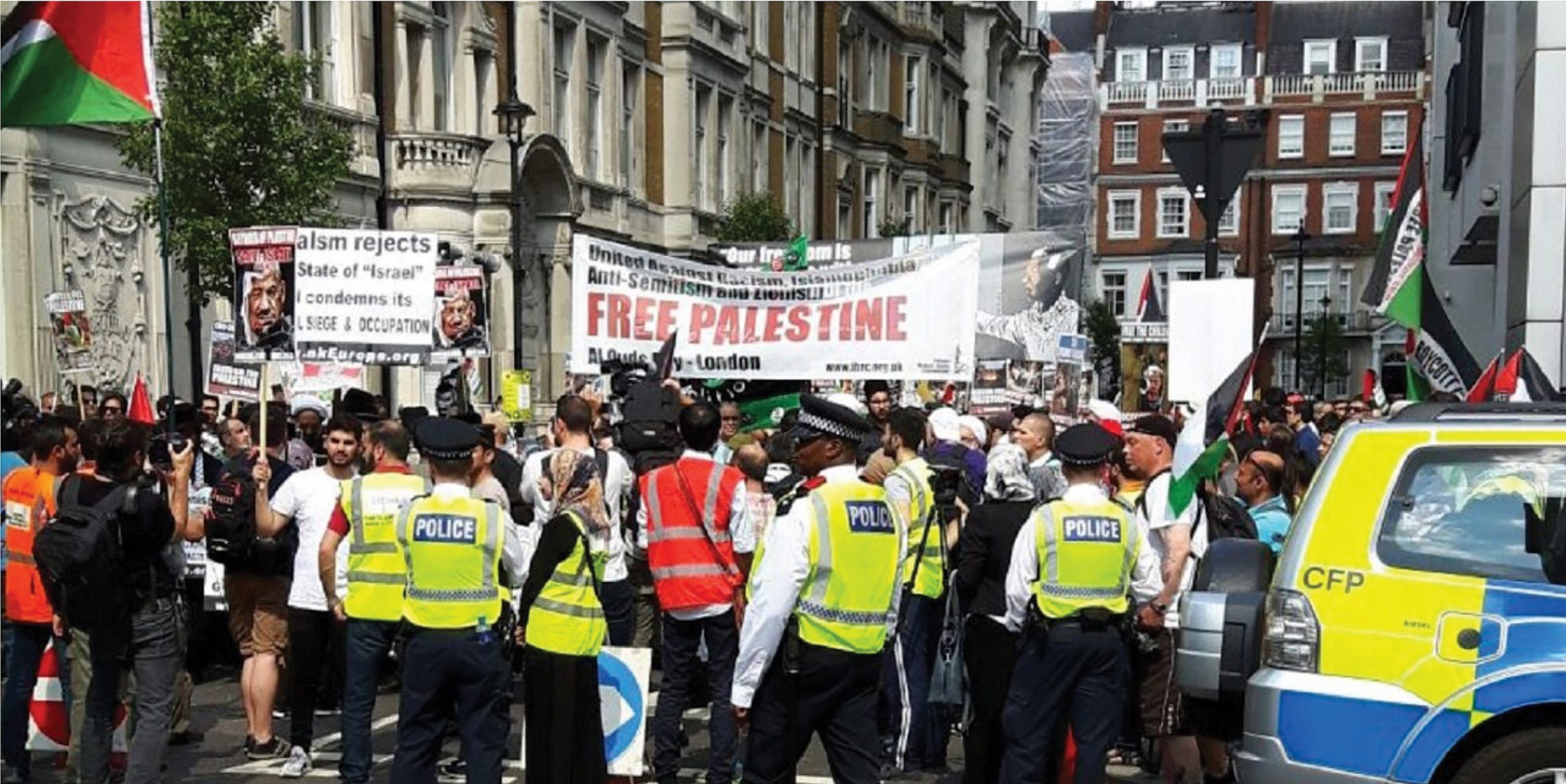 Police holding the line against a sea of anti-Israel marchers
Picture: Christians United for Israel

Disaster awaits if we don’t stand with the Jewish nation

As Londoners are left reeling with shock at a succession of terrible tragedies, angry residents and pundits inevitably start looking for someone to blame.

At the rally following London’s Al Quds1 march, the Iranian-inspired day calling for the destruction of Israel, one speaker perversely blamed the tragic West London fire on ‘Zionists’.2

And having failed to give a clear lead on so many ethical issues, the UK Government’s moral backbone is once more being tested – this time on the crucial issue of whether or not we will stand with Israel in her time of need.

Stalked by terror and threats on every side, the Jewish state is potentially in as great a peril now as its people were under the Nazis, with an estimated 120,000 missiles pointed at Israeli cities by the Lebanese-based terror group Hezbollah.3

And supporters of this vile enemy of democracy have been allowed to march through the streets of London waving an intimidating flag featuring an assault rifle.

Now Home Secretary Amber Rudd has promised to consider a petition signed by over 10,000 people calling for a total ban on Hezbollah. She called the march ‘distressing’ when responding to a House of Commons question by Newark MP Robert Jenrick, who said: “My wife and daughters are Jewish. We were met by a protest where there were anti-Semitic banners and chants, and there were people waving Hezbollah flags, which for those unfamiliar with the flag, has a big machine gun on it.”

The terror organisation is banned throughout the world – including by the Arab League – but only its military wing is proscribed in the UK. This provided the legal loophole allowing marchers to show their support for its political wing. Yet, by its own admission, Hezbollah does not differentiate between its political and military wings.

The organisation now has “more missiles below ground in Lebanon than the European NATO allies have above ground,” according to Israel’s Ambassador to the UN Danny Danon,4 and is using much of southern Lebanon’s civilian population as human shields for terrorist activities.

The Al Quds march itself reflected a shocking case of double standards because a pro-Israel rally set for June 22 (just four days later) was cancelled for ‘security’ reasons.

A Night to Honour Israel was to have been held in Westminster, central London, and would have been Britain’s largest pro-Israel event – though the venue had been kept under wraps for obvious reasons, especially as similar meetings have been disrupted by violent demonstrators in recent times.

Organisers Christians United for Israel explained: “Islamist extremists have called for specific targeting of Christians and Jews during Ramadan, when our event was due to take place.”

And yet the Al-Quds march was allowed to go ahead despite a 20,000-strong petition against it.

The Daily Mail columnist Richard Littlejohn wrote: “It’s irresponsible madness to hold such a polarising, provocative march in the wake of a bloody attack by Islamist terrorists.”5

There is, I perceive, some perverse logic to the reasoning behind London’s decision, in that while Christians and Jews are particularly vulnerable to attack from Muslim fundamentalists, supporters of the Palestinian cause are not at risk because Christians are called to ‘love their enemies’ (Matthew 5:44).

But whatever happened to the ‘diversity and equality’ we hear so much about these days? Should not both events have at least been treated in the same way?

When things go wrong, and we are attacked by murderous followers of the Koran, left-wing luvvies blame the Tories for cuts in the police budget!

A recent documentary focused on how the police were forced to deal with an anarchist rally. Huge resources were committed to this ugly event, allowing those who want to destroy our society to ‘have their say’. But Christians and Jews who love the nation of Israel are prevented from doing so.

It’s time our politicians faced up to the fact that the terror tactics we have recently witnessed in Manchester and London were first used on the streets of Israel. Muslim London Mayor Sadiq Khan has at least sussed that one out, having reportedly sought help from Israel on security matters.6

Many Christians will identify with the feelings of the prophet Elijah who, after winning a great contest with the idolatrous false prophets on Mt Carmel, realised that he had still not yet convinced Israel’s leaders of their need to turn back to the Lord.

We have been warning our leaders for so long about the Islamic threat along with the dangers of discarding God’s laws. But, as in the days of Jeremiah, their response is to declare “‘Peace, peace’ when there is no peace.” (Jeremiah 6:14).

It’s time the Church rose up as one to challenge the decadent culture we have lamely come to accept in our midst.

The London Bridge attack took place just 90 minutes before Britons traditionally celebrate the Day of Pentecost – the empowering of the Church 2,000 years ago. Yet the focus at this tragic time in England was on a pop concert in Manchester when what we really need is another Pentecost.

Elijah’s great victory over the false prophets on Mt Carmel was a precursor to Pentecost. The God of Elijah answered by fire, which burnt up the sacrifice even though it had been soaked with gallons of water. (1 Kings 18:16-46) Do it again, Lord! Send the fire!

A grim picture of the predicament of UK Jews has been presented in a recent Jerusalem Post article by Isi Leibler.1

Calling on them to seriously consider making aliyah (returning to the land of their fathers) in light of the surge of support for Labour leader Jeremy Corbyn – a ‘friend of Hamas’ – Mr Leibler says the threat to British Jews’ well-being and safety may be worse than at any time since 1656, when Jews returned to the country following their expulsion in 1290.

An eight-kilometre run along a beautiful Welsh mountain range is being staged as a demonstration of support for Israel. Organised by the Father’s House Congregation at Shotton in Deeside, the five-mile trail will take place on Sunday 6 August, and an Israeli flag will be hoisted on the mountain as part of the event.

In the week before King Felipe and Queen Laetizia’s glittering first State visit Britain, it was reported that Spain was giving millions to anti-Israel groups.

Pro-Israel groups have joined forces to stop the Spanish Government’s funding of non-governmental organisations (NGOs) working against the Jewish state.

NGO Monitor, an independent research institution monitoring other NGOs claiming to fight for human rights but which in fact assault Israel, reports that politicised funding designated for anti-Israel NGOs amounted to over €5 million in 2015 alone.  (United with Israel, June 29 2017)

In the week before King Felipe and Queen Laetizia’s glittering first State visit Britain, it was reported that Spain was giving millions to anti-Israel groups.

Pro-Israel groups have joined forces to stop the Spanish Government’s funding of non-governmental organisations (NGOs) working against the Jewish state.

NGO Monitor, an independent research institution monitoring other NGOs claiming to fight for human rights but which in fact assault Israel, reports that politicised funding designated for anti-Israel NGOs amounted to over €5 million in 2015 alone.  (United with Israel, June 29 2017)

Despite America’s UN Ambassador urging the UN to reject a motion to designate Hebron’s ‘Tomb of the Patriarchs’ a Palestinian heritage site, it is now just that.

Nikki Haley had denied the false claim that the site, sacred to three faiths, was under immediate threat, and warned against wasted time on symbolic action which could have negative implications for any peace efforts.  (United with Israel, July 4 2017)

Rabbi Dan Rosenstein, Executive Director of the Hebron Fund, spoke of his “shock and heartbreak at UNESCO’s latest ploy which throws the Bible and history into the garbage by denying the Jewish connection to our beloved city of Hebron.

“From Abraham’s purchase of the Machpela Cave (Genesis 23), there has been 3,800 continuous years of Jewish presence in Hebron.

“UNESCO’s vote, ironically in Poland, effectively destroys the Jewish connection to this holy city where our forefathers and mothers are buried and where King David first established his capital.” (Israel365, 9 July 2017)