Secrets of an underground movement led by “fiery” women

In a country whose rulers have vowed to destroy Israel, a growing army of Iranians are falling in love with the Jewish people and crying out for their salvation.

This has been the natural, though somewhat unexpected, outcome as up to a million citizens of this fiercely Islamic regime risk their lives by turning to Christ.

The Iranian Church is growing by around 25% each year

According to a recently released documentary film – ‘Sheep Among Wolves Part II’ – Iranian believers now represent the fastest growing and largest church network in the world, growing by around 25% per year. And they are “aggressively pro-Israel”, says the film’s director and presenter, Dalton Thomas.

“What if I told you the mosques are empty?”

Indeed, all is not what it seems in the Islamic Republic 40 years after the revolution that swept the ayatollahs to power.

Jesus is appearing to many in dreams and visions – even in person – and disciples forced to meet in secret are rapidly multiplying to such an extent that the authorities are having to admit their presence. Iran’s intelligence minister, Mahmoud Alavi, is quoted as saying that mass conversions “are happening right under our eyes”.1

More Iranians have become Christians in the last two decades than in the previous 13 centuries put together since Islam came to the region.2 And in a land where women are brutally oppressed, most of the leaders of this amazing move are women!

Dalton Thomas says they are biblically submissive to their husbands – but not to the devil. “These women are fiery – you can tell they’ve been with Jesus.”

Disciples know they will be raped, beaten or killed if caught

Produced by Frontiers Alliance International Studios, the film (available on YouTube) portrays a Church with no property, no denominational leanings, no bank accounts, no assets and no centralised leadership. But it’s a Church that knows about suffering and martyrdom. Disciples know they will be raped, beaten or killed if caught, but they are prepared to offer their bodies as living sacrifices for Jesus. 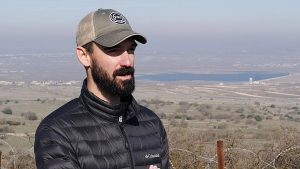 The film-makers say Islam’s huge ‘success’ is attributable to its demand for complete obedience, a counterfeit of Christianity which calls for such obedience to the King: “The enemy has taken this issue of being a bond-slave (to Christ) and built this demonic religion around it.”

Described as “a godly resistance movement against the oppression of Satan”, the Iranian underground Church has benefited from Disciple Making Movements (DMMs), an initiative which aims to let the Gospel spread from person to person.

Thus discipleship starts from the moment they encounter an unbeliever, rather than when a ‘sinner’s prayer’ is recited, as they teach others to obey Christ’s commands (Matthew 28:20). It is a Body of believers where the power of God is flowing, with frequent ‘signs and wonders’, which an Iranian Christian leader explains via Peter’s ‘living stones’ analogy (1 Peter 2:5): “The Body of Christ is cohesive. They’ll go on a retreat and there’ll be 80 people in two bedrooms. They can’t break off and form their own movement because there’s nowhere (ie another building) to go.”

The film is profoundly challenging to the Western Church; as Dalton Thomas says: “Jesus isn’t looking to inhabit buildings; we’ve had buildings, and it hasn’t worked.”

Following the example of Queen Esther and King Cyrus, Iranian Christians are ‘standing in the gap’ in prayer for the Jewish people today. “God transforms our perspective when we come to Christ and we fall in love with the Jews,” said one contributor.

Christ Church, Jerusalem, headquarters in Israel since 1849 of the Church’s Ministry among Jewish people (CMJ), is also featured in the film. I suspect this is because of their crucial role in encouraging reconciliation and a deepening of bonds between Jewish believers and their counterparts in other Middle Eastern countries including Iran.

It is a glorious fulfilment of the “one new man” reconciled to Christ through the cross (Ephesians 2:15).