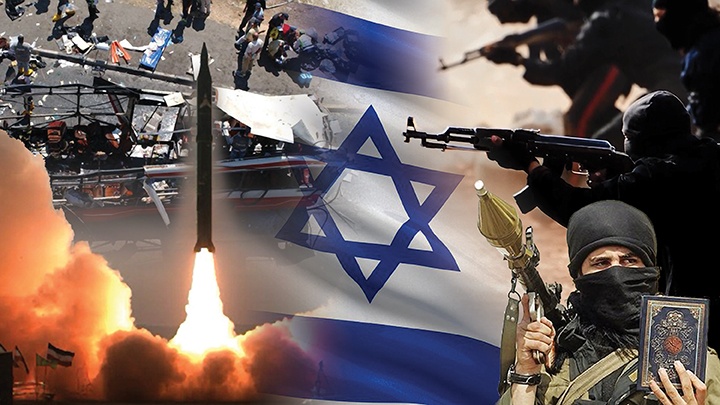 “I believe it’s time to tell the truth about the causes of Palestinian terrorism,” he told a press conference marking the visit of UN Secretary General Ban Ki-Moon. “It’s not the settlements. It’s not the peace process. It’s the desire to destroy the State of Israel, pure and simple.”

And in a powerful speech to the United Nations, Mr Netanyahu said the nuclear deal with Iran was not a recipe for peace, but in fact made war more likely. Did the world think their policy of appeasement would turn this “rapacious tiger into a kitten?” he challenged.

“When bad behaviour is rewarded, it only gets worse,” he said, adding that the world’s response to the genocidal threat against Israel was a “deafening silence”.

Meanwhile, in a new video intended for the Israeli public, the IS terror group has threatened to “slaughter the Jews”. Speaking in fluent Hebrew, a masked youth warns: “This is a message to all the Jews, who are the Muslims’ No 1 enemy. We promise you that not a single Jew will be left in the entire country.”

Anti-Semitism in Europe – a heightened feeling of isolation

A Jewish teacher has been stabbed on a street in Marseille, France, by three men who professed their support for Islamic State. The attack took place five days after the devastating terrorist attacks in Paris on 13 November, which were claimed by Islamic State.

Tziyon Saadon, wearing a kippa, was walking from his home towards the synagogue when the men, one wearing an ISIS T-shirt, spewed anti-Semitic abuse before stabbing him in the leg and arm causing serious, but not life-threatening, injuries.

The attack is not an isolated incident. It comes at a time when anti-Semitism is on the rise in Europe, yet many incidents go largely unreported in mainstream media.

In October, also in Marseille, a Jewish rabbi was attacked outside a synagogue along with his son of 19 and a friend, who was stabbed multiple times in the abdomen. According to the rabbi, the attacker shouted anti-Semitic abuse and murmured “Allah Akbar” upon lunging at his victims.

In Italy on 12 November, a 40-year-old ultra-Orthodox Jewish man was stabbed multiple times in an anti-Semitic attack in front of a kosher restaurant in Milan. Nathan Graff, who holds Israeli citizenship, sustained light to moderate injuries including to his face. His attacker fled the scene.

These incidents have led some to question whether recent incitement against Jews in Israel is possibly inspiring copy-cat attacks in Europe.

One area of concern has been online incitement carried by social media. In October Christians United for Israel UK (CUFI UK) reported that videos and photos posted onto Facebook and Twitter were showing instructional videos in how to stab Jews in Israel, how to maximise bodily damage and how to make weapons out of ordinary kitchen knives to carry out fatal attacks. One of the pages titled “Stab Israelis” was finally removed by Facebook after initially refusing to do so as it did not violate its guidelines.

The increasing anti-Semitism in Europe is causing many Jewish people to have a heightened feeling of isolation. The same is true here in the UK. Community Security Trust reported a 53% rise in anti-Semitic incidents in Britain in the first half of 2015 compared with the same period last year.

Callous response to attacks on Israelis

A paramedic trying to save the life of a 55-year-old Israeli who had been deliberately run over by a truck after getting out of his car during an Arab rock-throwing ambush witnessed dozens of Arabs clapping and cheering as Avraham Hasno lay dying on the pavement.

Amidst persistent portrayals of Palestinian terrorists as victims, it is reported that Mahmoud Abbas studied disinformation techniques in the former Soviet Union. Michael Widlanski, author of ‘Battle for our Minds’, told CBN News that the PA leader learned this ‘old trick’ while a student at the Patrice Lamumba University.

“You send out somebody to kill a Jew. He kills a Jew, or three Jews, or five Jews, and then he gets killed, and then you claim he was murdered by the Israeli police,” he said. “It’s a bunch of baloney.”

A 78-year-old Dutch nurse cried out to Jesus for help as she was being stabbed in her chest by a Palestinian terrorist on an Israeli bus. Marike Veldman survived the attack in which two Christian passengers died and 16 were seriously wounded.

Now recovering from multiple stab wounds, including a punctured lung, she moved to Jerusalem many years ago to take care of Palestinian orphans and other needy children. It is reported that, as soon as her attacker heard her cry Jesus’ name, he ran away towards the back of the bus. (JNN News)

Other recent articles by Charles Gardner include the following which can be found at www.heartpublications.co.uk