AFTER PARIS, LET’S DITCH POLITICAL CORRECTNESS! And tell the truth! 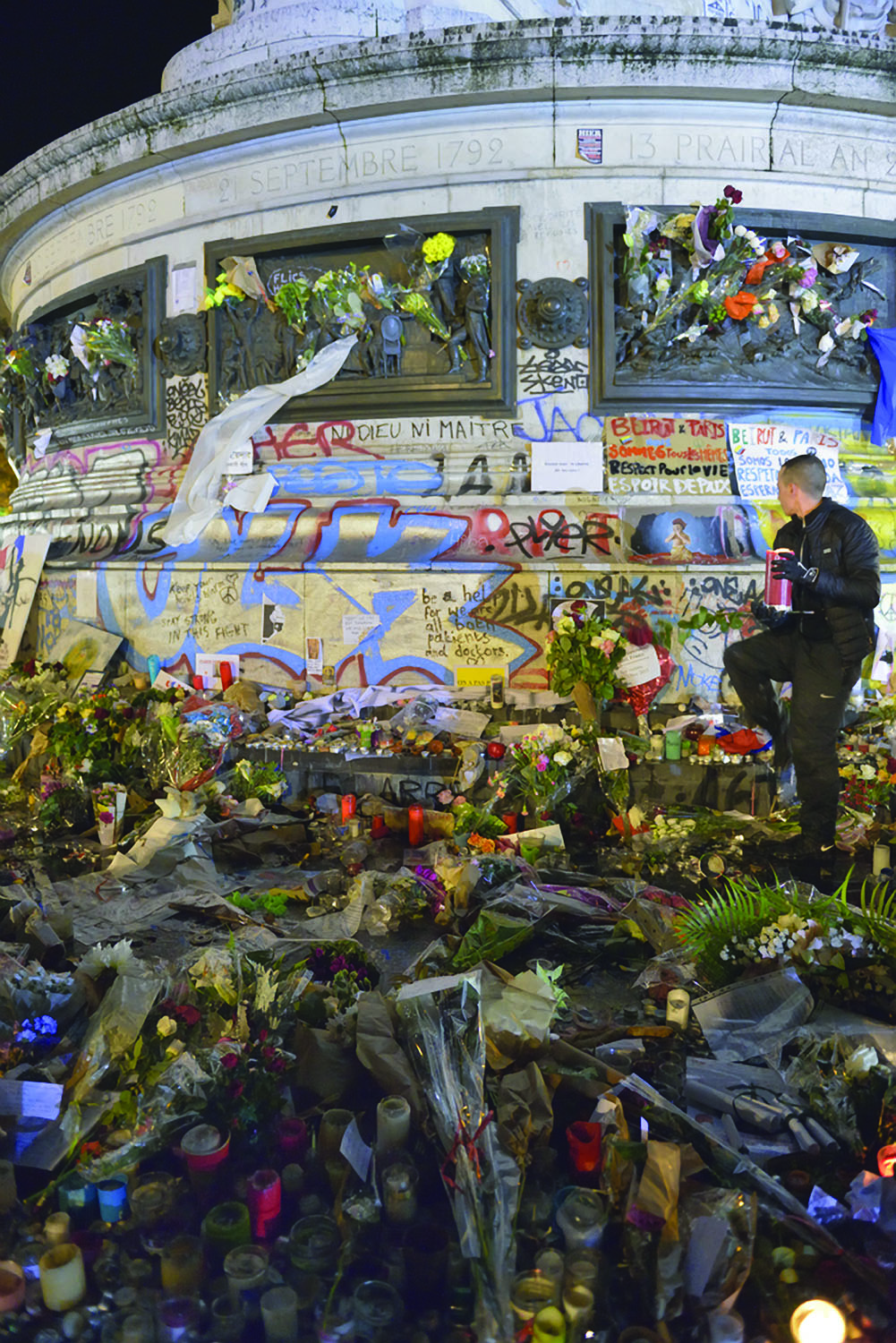 THE INDESCRIBABLE HORROR of the Paris massacre of innocent civilians is still reverberating around the world. The co-ordinated attack upon soft targets of unarmed civilians was a cowardly act of brutality that shocked western world. Every western nation knows that it could happen to them. The question is which city will be next? Will it be London or Washington or Brussels, or even Berlin?

But this is the kind of fear the terrorists hoped to generate. In Britain, our Government has stepped up security but if terrorists are determined to create mayhem they will find a way through any security network. The only real security for any nation is through its trust in God. We should be asking the fundamental question “Why has God allowed this terrible atrocity?” Can it be that we have abandoned our biblical heritage and thereby put ourselves outside the protection of God?

It is heartbreaking to hear survivors from the Bataclan Theatre in Paris where so many young people died. They were listening to the American heavy metal rock band ‘Eagles of Death’ who have a history of performing satanic music. They had just started a song ‘Kiss the devil’ with many carelessly holding up their hands in the satanic salute when the shooting started. It is tragic to think that this was the last thing victims heard before going into eternity. We should be asking the Lord to have mercy upon these young people who had probably never heard the Gospel and were products of our godless secular age.

But the Paris atrocity will not be the last. The Islamists have declared war. The big question facing the West is how should we react? Do we send our armies to the Middle East and blast our way through the complexities of civil war and tribal conflict in a vain attempt to destroy the terrorists in their strongholds?

The immediate reaction of President Hollande in Paris was that France would mobilise all her forces to destroy the terrorists which was similar to the reaction of President Bush after the 9/11 destruction of the Twin Towers in New York City.  The scripture quoted in Congress that day was Isaiah 9.10 “The bricks have fallen down but we will rebuild with dressed stone; the fig-trees have been felled but we will replace them with cedars”. But they had not read the previous verse which poured scorn upon such a reaction which is driven by human pride. Bush invaded Iraq which led to the present tragic situation in the Middle East.

Now David Cameron wants Parliament to use our air force to bomb Islamic State positions in Syria. But if we use force to combat force we trigger a cycle of bigger and more powerful weapons until we reach the ultimate weapons of mass destruction and destroy the world. Humankind has yet to learn that force is not the answer to force. Jesus specifically said that we are to love our enemies because love is stronger than hatred. We are using the wrong weapons for opposing the Islamic State. This is not a conventional war – it is a spiritual war! St Paul said: “For our struggle is not against flesh and blood, but against the rulers, against the authorities, against the powers of this dark world and against the spiritual forces of evil in the heavenly realms” (Ephesians 6:12).

Sadly, leaders of the Western nations, despite our centuries of biblical heritage, have no understanding of spiritual things: it is outside their realm of thinking. The huge mistake that Western nations have made is to refuse to face the reality of the nature of Islam. We have deliberately suppressed open discussion about Islam and labelled it “Islamophobia”. We have talked about terrorists as ‘extremists’ and tried to combat the so-called ‘radicalisation’ of young men. So the truth about Islam has been lost in a fog of political correctness.

I have lived and worked among Muslims for most of my working life in London and I know that most Muslims are ordinary, decent, peace-loving people but most of them know nothing of the history of Islam and have very little knowledge of the Qu’ran. There may be a similar lack of knowledge in the Muslim Council of Britain, which took out full-page advertisements in the national newspapers on 19 November. In the advertisement they declared: “The barbaric acts of Daesh (or ISIS as they are sometimes known) have no sanction in the religion of Islam, which forbids terrorism and the targeting of innocents.”

Are they really unaware that the young men of the Islamic State are actually following Muhammad as their example?  Muhammad advocated violence in the ‘Second Pledge of Akaba’ through which he unleashed violence against those who refused to accept his new religion and he used Qu’ran 9.5 which demands conversion on pain of death. Muhammad himself carried out a horrendous act of cruelty against Jews in April 627 in the slaughter of Banu Qurayza. They had already surrendered to him but Muhammad decided to slaughter all the adult males. The following is recorded by historian M A Khan:

“The women and children were captured as slaves and their homes and properties were as usual confiscated and distributed amongst Muslims. Following this, a trench was dug in the marketplace; and in Muhammad’s presence those 800 to 900 captives were brought to the brink of the trench with their hands tied behind and were beheaded with swords before pushing the dismembered bodies into it. Muhammad himself chopped off the heads of two Jewish leaders.” This was justified from the Qur’an: “Some ye slew and ye made captive some. And he (Allah) caused you to inherit their land and their houses and their wealth, and land you have not trodden. Allah is ever able to do all things.”(Qur’an 33.26 – 27). [M A Khan, Islamic Jihad, 2011, p35]

So what is the Christian answer?

What should a truly Christian nation do when faced with these terrible atrocities? First we should face the fact that over the past four or five decades of secularisation we have turned our backs upon our Judaeo-Christian heritage and we are no longer a nation that puts its trust in God. It may be that God is allowing thousands of Muslims to come into Europe as part of his judgement upon us. But God is able to turn judgement into blessing and already there are reports of hundreds of Muslims accepting Jesus as Lord and Saviour in reaction to the horrors of the Islamic terrorists. Europeans are being given the opportunity of witnessing to the truth by showing love and compassion to refugees from war.

In Britain we have allowed millions of Hindus, Sikhs, Muslims and others to come into Britain and bring their religions with them; building their temples and mosques in prominent places in our towns and cities. But we have made no attempt to teach them the history of our nation and our great Judaeo-Christian heritage. This is sheer madness! We have despised our birthright while at the same time allowing secular humanists to spread their vile teachings in our schools and universities and to change the laws of the land to accommodate their perversions of the truth. We have dropped the teaching of the Bible; and our churches have lost their prophetic mission fearlessly to declare the truth.

We should reinstate the teaching of the Bible to every child in the nation and promote the Christian faith in all schools. If there are not enough teachers capable of doing this we should enlist the help of local churches. Church and state and media should work together in a public education programme to preserve our national heritage and to teach the public the elements of the Christian faith (such as a specially prepared form of the Alpha programme); and mobilise Christians right across the nation to get involved in the re-evangelisation of Britain and cover the nation in prayer.

Then we can be certain of the protection of God over Britain relying upon his solemn promise: “If at any time I announce that a nation or kingdom is to be uprooted, torn down and destroyed, and if that nation I warned repents of its evil, then I will relent and not inflict on it the disaster I had planned” (Jeremiah 18:7).

Read weekly articles from Dr Clifford Hill and his editorial team on today’s most vital issues. After a break of 30 years when ‘Prophecy Today’ was last in printed form, the same insights and challenges can now be read free online. Recent articles include:

State of the nation