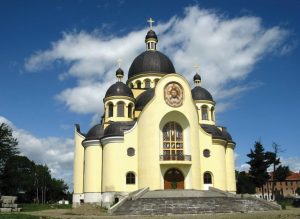 The Transfiguration Cathedral in Kolomyia, Ukraine

A top police official in Ukraine has sparked outrage by demanding a ‘list of Jews’ in the western city of Kolomyia.

The demand for a list of the names, addresses and phone numbers of local Jews was received by Yakov Zalischiker, head of the city’s Jewish community, and has been roundly condemned as reminiscent of the Nazi occupation of the former Soviet republic.

The Jerusalem District Court has ordered the Palestinian Authority to pay 500 million shekels ($142m) to the families of those killed in Palestinian terrorist attacks, mostly committed during the Second Intifada (2000-2005).

A new Danish translation of the New Testament has sparked outrage by omitting the words ‘Israel’ and ‘Jews’.

They have been accused of whitewashing history, identity and sacred Scripture, and even a Muslim cleric has condemned the omissions, saying it was done to present the Jewish people as stateless.

Birgitte Stoklund Larsen, a journalist for the Danish Bible Society, said it was done to avoid identifying ancient Israel with the modern state.

A Christian TV station broadcasting in Hebrew is causing controversy over claims it is proselytising Jews.

Even American evangelical leader Laurie Cardoza-Moore has urged Prime Minister Benjamin Netanyahu to take it off the air.

Host of TV programme ‘Focus On Israel’, Cardoza-Moore said: “At a time when global anti-Semitism is engulfing the world, GOD TV should be using its platform to teach Christians about their biblical responsibility to stand with our Jewish brethren and the State of Israel.”

GOD TV deny the proselytising claims, explaining that Shelanu TV, their Hebrew-language broadcast, features Christian content which happens to portray Jesus as the Jewish Messiah. They have signed a seven-year contract with HOT Cable, the largest cable network in the country, and are working in partnership with Israel’s Messianic Jewish community, which means that American ‘evangelicals’ are seen to be working against the interests of believers in another country!

The BBC has rejected calls from a pro-Israel group to ban a public health expert from its coverage of the coronavirus pandemic after several of his anti-Semitic tweets were discovered.

Prof John Ashton was alleged to have compared Zionism with Nazism and has also suggested it was “time for Jews to reflect” on the situation in Gaza.

The founder of the anti-Semitic Boycott, Divestment and Sanctions movement, Omar Barghouti, has said that should Israel invent a vaccine for the coronavirus, he would have no problem cooperating with them if it saved millions of lives.

It seemed Labour’s anti-Semitism problem might be receding after new leader Sir Keir Starmer, whose wife is Jewish, spoke boldly of rooting it out.

Iranians beg to flee – to Israel!