One thing about getting older is that you are more fearless in what you say.

Pastor R T Kendall is 86 and has just produced a book on fear; its full title is ‘The Good, The Bad, and the Ugly Fear’.

This is classic R T Kendall, written with thought-provoking accuracy. RT is seeking to awaken the Church to the majestic, holy God we serve, and help us prepare for the day we stand before him.

His introduction includes a famous quote from William Booth (1829-1912), the founder of the Salvation Army:

Preaching on holy fear, and Jesus’s own teaching of eternal punishment, have largely been avoided because we are afraid people won’t come back to church

RT tells us, “I cut my teeth on this kind of theology, including the preaching on hell.”

He firmly believes a sense of fear and awe of God should accompany the preaching and reception of the Gospel. Having spent a lifetime in the Church, he has concluded that preaching on fear, and Jesus’s own teaching of eternal punishment, have largely been avoided because we are afraid people won’t come back to church.

He argues that the opposite is true; one of the reasons for empty churches is a lack of preaching on ‘godly fear’.

RT isn’t just sharing an old man’s opinion. He takes us back to the Scriptures – many of them.

The first message of John the Baptist was “Flee from the wrath to come” (Matthew 3:7).

The first word of Jesus’s preaching was “Repent” (Matthew 4:17).

The only reference to the Gospel in the book of Revelation is to “fear God” (Revelation 14.6-7).

He reminds us that Jesus never, ever apologised for the God of the Old Testament.

He moves on to a whole section on how the fear of God in our nation has gone. He is particularly relevant to today’s society as he contrasts God’s way and the way people are living.

An interesting chapter is on the fear of other people – the fear of being hurt by people. We live in an age where mental health issues are to the fore. This chapter will help many.

RT writes candidly of his own fear of failure throughout his life. He spent 25 years as minister of Westminster Chapel in London. Following its previous famous incumbent, Dr Martin Lloyd-Jones, RT writes: “I always felt like a failure next to him.”

He lists eight reasons why, if we walk in the fear of man, it will affect our walk with God. I have no space to list the reasons here. Read the book to find them out!

Thankfully he has later chapters on overcoming the fear of man.

“When you make the fear of God your greatest priority, you can walk free of ungodly fear. “Step out in courage and truly trust God … This is my prayer for you”, says RT.

Men, don’t let the title put you off reading about a vanished culture

‘Call the Desert Midwife’ is her second book and she has certainly done justice to the story of an amazing woman.

Marion Osgood met Amal Boody, the ‘desert midwife’, when she visited the United Arab Emirates with her husband in 1999. Amal was – and is – a strong Christian who was born and brought up in Syria. 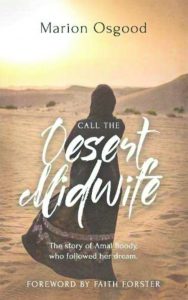 Amal trained as a nurse and went on to become a midwife. She worked almost single-handedly among many of the poorest of Saudi Arabia and the United Arab Emirates. It was the days before oil took hold on the country and transformed it to what we see on TV today.

This is certainly not the kind of book I would normally pick up and read. Most men wouldn’t want to read about midwifery, but don’t be put off.

This book is about the culture and traditions of areas of the Middle East we know so little of, and which have changed radically in a lifetime. It is about a woman with a strong Christian identity who succeeded in a male-dominated Arab world.

Amal is 93 this year and still lives in the United Arab Emirates. In 2019, in recognition of her service to the community, the local Sheik presented her with a large engraved plaque, a citation for “her esteemed contribution to the region”. The girl from the remote farming community of western Syria, who was, and is, fearless in her witness of the Gospel, had earned her place in history.

There are some books whose contents I forget after a few weeks. That’s not the case here. It is a book about a slightly eccentric lady, well written, full of history of an area we know so little of, with a strong Christian input. I find I keep thinking about it and am sure it will have the same effect on you.