How God turned my marriage around 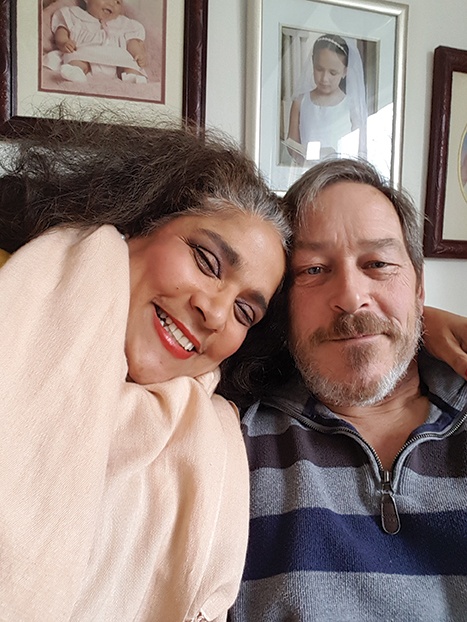 Captain Sharon O’Connor was used to ordering men around in the army, but after 27 years of trying to wear the trousers in her marriage, she finally realised something had to change

This time three years ago, I had finally walked out on my husband. Years of friction and no communication in our marriage had utterly worn me down. But fast-forward to August this year, and we will celebrate our 30th wedding anniversary together as a happy couple. So what happened to restore our marriage to ‘happily ever after’?

I’d always had a strongly independent personality. Working as an army Captain in various human resources and admin roles, I saw myself as a capable person and didn’t realise that I could often emotionally reject people.

When I met my husband-to-be, Crispin, while training at Sandhurst in 1985, I wasn’t particularly attracted to him at first. But when he later returned to visit my colleague, I suddenly felt an overwhelming sense of love for him – and jealousy that he had come to see someone else!

We kept in touch, and Crispin started pursuing me. He even spent a day shopping with me without one complaint! Happily we were posted to the same barracks in Blandford, Dorset, where Crispin was a Captain in the Royal Signals. When he left for Germany, we would spend long evenings on the phone. We finally got married in August 1989.

When my husband left the army he found work in the US. In December 1994 I too left when I discovered I was expecting our first child, James.

In our close-knit US community I started attending a women’s Bible study. I could feel God tugging at my heart; although I’d grown up knowing about God and singing in the school choir, I’d never had a personal relationship with him.

But this close connection with Christians withered when we returned to the UK after the birth of our second child, Alyce, in 1997. Our third ‘surprise’ baby, Catherine, was born in 2005.

During their early years, I mostly stayed at home, as well as running my own beauty business. I would sometimes get frustrated about being ‘stuck in the house’; after all, I was used to commanding men in the army!

Sadly, as our children started to grow up, Crispin and I gradually began ‘falling out of love’. For me, it started with critical thoughts about how little he would help with the children. I grew resentful of the way he would get them excited just before bedtime but not help with baths and stories, so arguments ensued.

It didn’t help that Crispin was the one who had originally wanted children, not me. Now, of course, I obviously wouldn’t have it any other way.

At the time, though, I would routinely cut Crispin down with my words, then wonder why he wasn’t stepping up to the plate. I even ended up on antidepressants for a short time.

In 2003 I discovered that God was still on my case. One morning I dropped in on a friend and found her planning Alpha, an introductory course on Christianity, with the local vicar. “Sharon you’ll come, won’t you?” she said, more of a statement thana question. So I started attending the Alpha course at her house.

Everything changed from then onward. Each session, there were snotty-nosed, blubbing women in corners, and I was one of them! God was mending so many places in my life which I didn’t even know were hurting.

That March I also attended a healing service; when the guest speaker invited people to respond to the message, I was the only one to go to the front. That night I fully gave my life to Christ, amid lots more blubbing and acres of tissues!

Soon afterwards, I met American missionary and evangelist Charlynne Boddie while she was teaching a ‘Led by the Spirit’ course. She explained how to be ‘baptised in the Holy Spirit’ like the disciples were in Acts. As we began praying and giving thanks together, suddenly I discovered a
new prayer language flowing out of my mouth.

From that moment on, I was filled with a deep sense of joy. My relationship with God became much closer, and whenever I didn’t know what to say or do in a situation, I could pray in my new prayer language. I ended up visiting churches around the country as part of Charlynne’s prophetic team.

During this time I was attending a Roman Catholic church with Crispin, who was raised a Catholic, as a way of getting him to church. But I also started attending Kingdom Faith Church in Horsham, where I found worship and teaching that deeply resonated with me. At this point I realised that the Bible wasn’t just a set of guidelines and finally made the decision to get serious with God.