POPULAR evangelist J John’s successful ‘JustOne’ outreach initiative has already united churches and drawn crowds to large arenas in London, Kent and Belfast. Now he is set to bring his humorous take on the Christian message to crowds in Portsmouth. 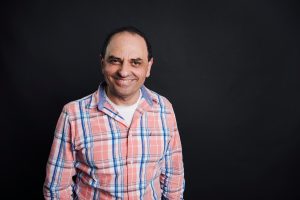 The aim is for guests to bring ‘just one’ non-Christian friend with them to hear the Gospel message at Portsmouth’s iconic Guildhall on Saturday 4 and Sunday 5 April 2020.  Around 3,400 people are expected to attend.

Organising the big event is well-known sportsman Mick Mellows, formerly a professional footballer for Portsmouth FC, who now directs the charity Faith and Football. He invited Rev Canon J John to kick off the outreach at Portsmouth Cathedral on 9 October, sharing the JustOne vision with around 320 churchgoers.

Mick says: “The event has a vision to unite the Church in the region and provide a fresh focus on evangelism. It is such an exciting opportunity for us to invite our family and friends to hear J John make clear proclamation of the transforming power of the good news of Jesus.”

Around 50 churches have already expressed interest in partnering with the outreach, including churches in Chichester, Petersfield, Emsworth and Fareham.

J John told HEART: “JustOne at Portsmouth Guildhall is a significant opportunity for Christians across Portsmouth and the surrounding areas to bring a friend, relative or colleague to hear about the life-changing message of Jesus. I have much anticipation and expectation for a blessed event.”

J John will also be speaking at the Usher Hall, Edinburgh, on 6 June.

Meanwhile, in the lead up to Christmas, J John has also launched a campaign encouraging Christians to share their faith in public spaces, with posters in 47 underground stations stating: ‘2.3 billion people believe that Jesus Christ is the Truth. Do you?’ A linked digital campaign gives daily one-minute stories of inspirational reasons why people believe in Jesus.