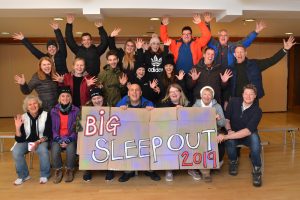 This year’s Big Sleepout volunteers: centre front is Off the Fence CEO and founder, Paul Young

WHAT DO three bank staff, four insurance brokers, three estate agents and three ministers of religion have in common?

They all slept outside in five degrees to raise money for the homeless.

It was the 21st Big Sleepout organised by Brighton Christian charity Off The Fence. Staff and volunteers from the charity, together with the ten white collar workers and three ministers, set up camp in a school playground, with each group covertly competing with the estate agents to build the best shelter. Dan Henderson, vicar of St Andrew’s, Hove, said, “I knew it would be cold, but I didn’t know just how uncomfortable sleeping on cardboard would be. Going to work the next day was hard, but then one in six of the homeless are working, so it was good to have an insight into that.”

Jo Henderson of Off The Fence said, “Homelessness is still an overwhelming issue in Brighton, with 15 new rough sleeper cases in the city every week. We take them warm clothes, food and hot drinks, and run a day centre to help with housing, benefits, healthcare and job applications.”