“GLORY TO ALLAH” SLOGAN TO APPEAR ON UK BUSES 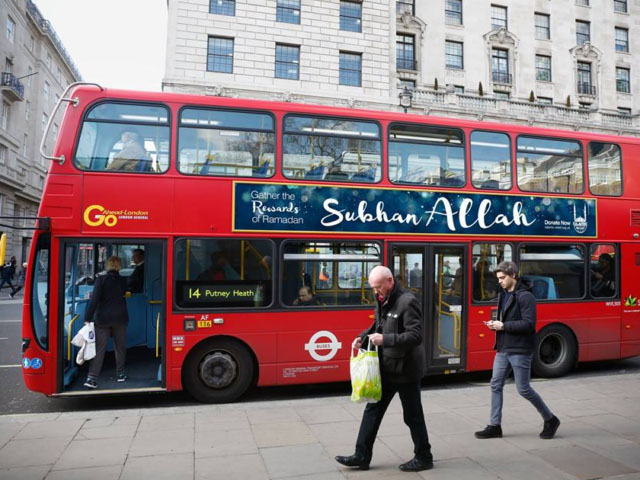 Britain’s largest Islamic charity says it wants to “break down barriers” and portray Islam positively by launching a new advertising campaign on UK buses.The campaign is targeted at raising donations for the charity’s Ramadan aid to Syria, but is attracting attention for the “hundreds” of buses which will be decorated with the phrase “Subhan’Allah” or “Glory to Allah.”

Islamic Relief once had its accounts with banking giant HSBC closed after concerns that cash for aid could end up with terrorist groups abroad.

The Birmingham Mail has revealed that the pro-Allah poster campaign will soon appear on buses in London, Birmingham, Manchester, Leicester and Bradford – cities with large Muslim populations.

“The campaign has been orchestrated to coincide with the holy month of Ramadan in June, when Muslims traditionally fast and give to charity,” said the newspaper.

Islamic Relief Director Imran Madden said: “There is a lot of negativity around Muslims. We want to change the perception of Islam. The campaign is about breaking down barriers and challenging misconceptions.”

The campaign has drawn criticism from some UK Christian groups who fear their own faith is being increasingly censored while allowances are made for Islam. They cited the fact that, last year, three cinema chains – Odeon, Cineworld and Vue – refused to show an advert featuring the Lord’s Prayer.

Andrea Williams, head of London-based Christian Concern, said that allowing Islamic adverts while banning Christian ones reflected a “disproportionate fear” about the Christian message and worries about critiquing Islam.

Mrs Williams said: “Our cases at the Christian Legal Centre demonstrate how the message of Christianity is censored in the public space as the elite fears that it will offend”.

The Christian Institute and former MP Ann Widdecombe have also said that there is unfairness in the advertising industry.