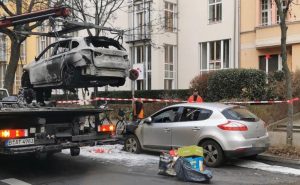 A journalist supporting the March for Life in Germany was targeted by a feminist group who set fire to his car and publicised his home address – where his children also live.

“We will not be bullied into silence”

Michael Robinson, spokesman for the Society for the Protection of Unborn Children (SPUC), said: “As the pro-life movement advances, so do attacks on pro- life people. We will not be bullied into silence.”

According to SPUC, attendances at pro-life marches across Europe have been increasing. In the UK, 5,000 people joined in the London March for Life last year, 20,000 protestors supported pro-life demonstrations in Northern Ireland and there are more pro-life societies at universities – despite increasing opposition from student unions.